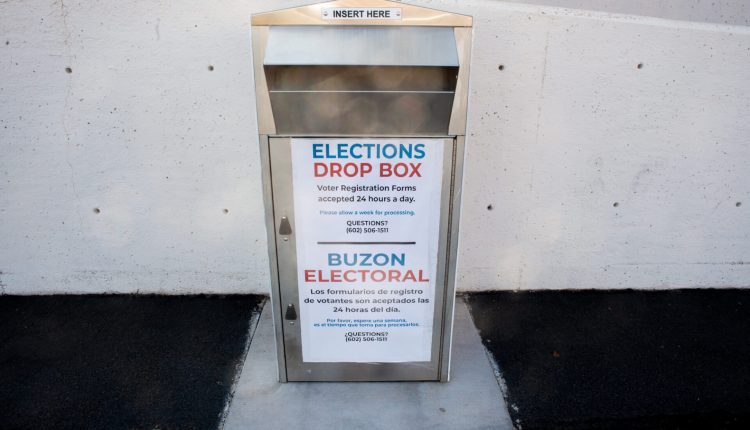 Fringe anti-government groups are planning to watch drop boxes and the polls in Arizona, spurred by conspiracy theories. The groups’ sometimes violent rhetoric has advocates worried, and some local politicians are stirring the pot.

“We know where you are. You see us everyday and you better believe we are watching you,” one video says on a website that advocates for watching of drop boxes, run by an anonymous Arizona resident who has fallen deep into COVID and election conspiracy theories. “Don’t sleep too soundly. That noise you hear might be one of us.”

The increased attention to ballot drop boxes comes in the wake of the debunked film “2000 Mules” by controversial conservative figure Dinesh D’Souza. Multiple films by D’Souza have focused on his political enemies, as well as mentioning his conviction for campaign finance fraud. Former President Donald Trump pardoned D’Souza for that crime.

D’Souza’s film alleged that they were able to track “ballot mules” using purchased geolocation data who were paid to stuff ballot boxes with completed ballots. The practice, pejoratively referred to as ballot harvesting, is illegal in Arizona.

Now, groups are organizing events to keep an eye on drop boxes in Arizona in an attempt to watch for alleged “mules” or other instances of wrongdoing in the Arizona general election. One of those groups is connected directly to the Arizona chapter of the Oath Keepers, an anti-government extremist group.

The Yavapai County Preparedness Team is the Arizona chapter of the Oath Keepers and is working with a group called the Lions of Liberty on what they call “Operation Drop Box.”

On its website the group members describe themselves as “conservative patriots” who say the country has been hijacked and undermined by “global elites, communists, leftists, deep state bureaucrats, and fake news.”

Jim Arroyo, the leader of the Arizona Oath Keepers chapter said in a video of their July meeting that the group sent out an email to everyone in the group’s roster, which included 1,000 people.

“For the November election we would like to post people there in addition to the cameras to have eyes on target to be able to notify law enforcement,” Arroyo said in the meeting, referring to the cameras the Yavapai County Recorder’s Office has already installed on the drop boxes around the county. “We have already coordinated with Sheriff Rhodes and he told us that if we see somebody stuffing a ballot box and if we get a license plate they will make an arrest and there will be a prosecution.”

Yavapai County Sheriff David Rhodes has spoken to the Arizona chapter of the Oath Keepers on two separate occasions, the Arizona Mirror confirmed.

“I’ve got to tell you, this is one of my favorite groups. It is great to be with friends,” Rhodes said in an August 2021 meeting, also noting that his predecessor was in attendance and had spoken during previous meetings.

“Sheriff Rhodes has zero to do with their effort to watch the drop boxes,” Yavapai County spokesperson Kristin Greene told the Mirror when asked about coordination between the Sheriff, Lions of Liberty and the Oath Keepers. Previous versions of the Lions of Liberty website stated the group would get in touch with Rhodes; those references have now been removed.

Rhodes again spoke to the group in late September, a meeting which the Sheriff’s Office said was to educate the group on what was legal and what was not legal for the group to do. The Yavapai County Sheriff’s Office told the group members that as long as they stay 75 feet away from the drop boxes, they are within their legal rights, but any closer and they could be violating the law.

“Any intimidation by anyone, of any voter is something this office takes seriously,” Greene said.

Yavapai County Recorder Michelle Burchill told the Mirror that the 75-foot limit may not be enforceable, however, the office is continuing to work diligently to make sure the cameras installed on all the drop boxes are working properly, a preemptive measure taken to get ahead of likely impending legislation.

“We kind of foresee that the future of the legislature is going to request or require cameras so we felt that we should get ahead of it and if it gives our voters one more sense of security,” Burchill said of the cameras.

Burchill called the Lions of Liberty “concerned citizens feeling they are doing their civic duty,” but she is concerned that voters may feel uncomfortable or intimidated. She urged anyone who feels that way to contact law enforcement or their office directly.

“If there is something of actual concern or something that needs immediate attention [The Recorder] would direct them to the Sheriff department,” Burchill said.

The county is also at the center of another effort led by former Graham County Sheriff Richard Mack, who leads the anti-government extremist organization the Constitutional Sheriffs and Peace Officers Association.

Mack met with the Arizona Oath Keepers this month to discuss “election integrity” and an initiative led by the group behind D’Souza’s flawed film and Pinal County Sheriff Mark Lamb, according to CSPOA’s website. Mack’s group has been investigating alleged “voter fraud” with far-right Sheriffs across the country often attempting to do things outside of their duties and jurisdictions such as impounding voting machines.

CSPOA and the Oath Keepers have long had close ties, according to researchers.

Greene said that Sheriff Rhodes is not a member of CSPOA.

“Every sheriff is a constitutional sheriff,” Greene said.

Others share Burchill’s worries  but also have concerns about the Oath Keepers watching the polls and drop boxes, especially given their history.

“I certainly have some concern given the reputation of the Oath Keepers and given the language of some of these organizations,” Sean Morales-Doyle, director of the voting rights program at the Brennan Center for Justice told the Mirror.

Many groups over the history of the United States have engaged in poll watching, both partisan and non-partisan, but more recently in the 1980s, poll watching led to a consent decree being placed on the Republican National Committee for decades due to a number of activities, including sending armed off-duty police to polling locations.

“The important question is the effect it has on the voter,” Morales-Doyle said, adding that standing around a drop box if done in a “passive manner” might be OK but when paired with certain rhetoric, it creates larger concerns.

GOP Secretary of State nominee Mark Finchem in a recent interview pushed for people to download a smartphone application that encourages users to take photos and videos of alleged election fraud to create a “national database.”

Finchem is far from alone in pushing residents to do similar actions. Sen. Kelly Townsend, R-Apache Junction, in a hearing about evidence of alleged voter fraud found by the group behind the flawed D’Souza movie, Townsend called on “vigilantes” to camp out on drop boxes.

“I have been so pleased to hear about all you vigilantes out there that want to camp out at these drop boxes,” Townsend said at the end of a nearly two-hour legislative hearing by True the Vote, a conservative group that supports restrictive voting laws to combat what it says is massive voter fraud.

Lake Havasu Republican Sonny Borrelli has also made similar calls while at an election security forum.

“We need to be force multipliers,” Borrelli told the crowd in Tempe. “We need to have people camped on unmanned drop boxes and camp on those and keep an eye on them and take down that data, license plates, pictures and so on and so forth.”

“It is not their job to be sort of vigilante law enforcement,” Morales-Doyle said of poll watching.

Local law enforcement may not be the best option for a voter to turn to if they do end up feeling intimidated at the polls, according to Morales-Doyle. He suggested going to local election officials, the election protection hotline or federal law enforcement.

Voter intimidation is a federal crime, one that is enforced by the FBI and Department of Justice.

When asked for comment about the situation in Yavapai County, the FBI Phoenix Field Office referred the Mirror to a link about what the FBI can and cannot do in regards to election-related crimes.

“Enough with the election deniers and fear-mongers, who only seek to undermine our democratic process,” United States Attorney for Arizona Gary Restaino said in a statement to the Mirror. “I’m proud to live in a state that endeavors to remove barriers to voting, and that has long believed in vote-by-mail. Working in partnership with our state and local election officials, the Department of Justice will do its very best to ensure that every eligible voter who chooses to vote can do so easily and efficiently, without interference or discrimination.”

U.S. Attorney’s Office spokesperson Yvette Cantu said the office could not “comment about any specific cases or matters” when asked about the Oath Keepers in Yavapai County When asked if that meant there was an investigation into the Oath Keepers, the office did not respond.

While voting rights advocates like Morales-Doyle say there is cause for concern due to the country’s changing political landscape, increased threats to election officials and fewer restrictions on partisan activity, most voters shouldn’t be worried.

“I do think that the vast majority of polling places across the country and Arizona, voters are going to have a typical experience in 2022 and voters are not going to have anything to worry about,” Morales-Doyle said.

Dropbox watching efforts in Maricopa County have already been inconsistent.

“[Voters] shouldn’t let the kind of rhetoric that is driving this conversation keep them from participating in our democracy,” Morales-Doyle said.

For information on early voting in Arizona, go here.