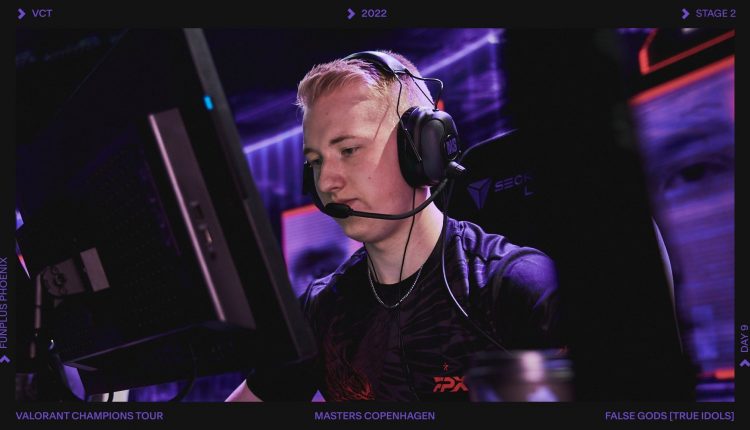 In the lower bracket of the VALORANT Champions Tour 2022 Stage 2 Masters tournament, FunPlus Phoenix swept DRX 2-0 and will advance to face Fnatic in the lower bracket semifinals. With this loss, DRX are eliminated from the competition and have to wait until Champions to fight again internationally.

The Final 4 are locked in.

FunPlus Phoenix’s confidence is back alongside SUYGETSU

This matchup was a rematch from the group stages; DRX squeezed out a win over FunPlus Phoenix while they were playing with substitute player Mathias “SEIDER” Seider. Now, with Dmitry “SUYGETSU” Ilyushin back on the roster for the knockouts, the team that stayed near the top of the Europe, Middle East and Africa region for two stages have made a run to the top four and will see the crowd in Copenhagen .

“We feel much more confident now, because of how important our team chemistry is,” said FPX player Kyrylo “ANGE1” Karasov. “Not only was it a win, but it was a confident one. I wanted two things for this tournament; first was for everyone to play on stage in front of the crowd, and the second was to qualify for champions. We got both, so everything else is a bonus for us now.”

Ange1 was quick to point out the issues that his team had in their loss to DRX in the group stage, mostly revolving around things outside of their control; that statement has definitely aged well since the full roster has come back together with everyone working in tandem.

With all of the experience the team has combined heading into Stage 2 Masters, key players need to stay in top form throughout the tournament. Many certainly have; the best example of that on this roster is Ardis “ardiis” Svarenieks, who leads the entire event in both ACS (263.5) and rounds played alongside three of his teammates (311). He even showed more flexibility in this DRX series, going on Jett for Ascent and helping lead his team to a victory. It wasn’t an agent choice that he was happy with entering the series, but he was happy it worked out.

“I’m going to be honest: I hate Jett,” Ardiis said. “I don’t like the new Jett, which is why I don’t pick it. My teammates tell me to pick it and I always say f*** off. After practice, both the players and coaching convinced me that Jett could win Ascent for us. When we ran it back, we won, so luckily it went in our team’s way.”

DRX are out of Stage 2 Masters

On the other side of the coin, DRX yet again couldn’t get past the 5th-6th spot in an international competition. Looking into their roster’s history, they have yet to win an elimination match internationally. Considering their potential and regional success, the pressure caught up to them in the series against FPX.

“We always put up good fights in losses before internationally, but this time I think we made too many mistakes in the first half of Ascent,” said DRX head coach Pyeon “termi” Seon-ho. “Then, on Fracture, our planning wasn’t right and it spiraled out of control.”

As mentioned earlier, this wasn’t these two teams’ first matchup against each other. Post match, while FunPlus Phoenix got better, DRX felt like they were the reason they lost.

“There is a difference between FPX’s main and sub roster, and they were clearly a stronger team than the one in groups,” said DRX player Kim “Zest” Gi-seok. “But, I don’t think we lost because they got their main roster back, it’s because we didn’t play well enough.

That spiral was evident in some of the players’ stats, with Kim “MaKo” Myeong-kwan getting only three kills on Fracture. When asked about what the plan is now for their future, MaKo knew that they’re going to need to spend some time together sorting some issues out before Champions comes around.

MaKo plays on stage at the VCT 202 Stage 2 Masters in Copenhagen, Denmark. | Provided by Riot Games.

“We’re going to prep for champions and aim for better results,” MaKo said. “We’ll need some time to reset mentally and fit better as a team to come back better.”