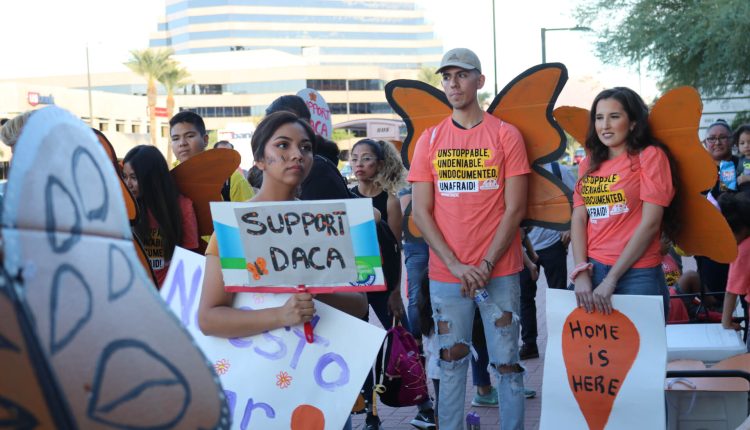 There are more than 22,000 DACA recipients in Arizona, and as many as 44,000 more who could potentially qualify for the program, according to estimates from the Migration Policy Institute, but a ruling from a federal appeals court on Wednesday kept the program’s ultimate fate in limbo, and left those 44,000 hopefuls without recourse.

Wednesday afternoon, a three-judge panel on the 5th Circuit Court of Appeals agreed with the decision of U.S. District Court Judge Andrew Hanen, who sided with nine Republican-led states that challenged the program in 2021. Both Hanen and the 5th Circuit Court said the program is unlawful, and ruled to halt the acceptance of new applications while keeping the renewals of initial applicants, which occur every two years, intact. In light of President Joe Biden’s recent attempt to enshrine the protections of DACA into administrative law, the federal appeals court returned the issue to Judge Hanen for yet another review on its legality.

DACA advocates say it’s unlikely that Hanen, who previously ruled against the program, will decide to restart it.

“Realistically, we are ready for the same result; the negative outcome where it’s not going to be allowing initial applicants,” said Diana Muñoz, immigration coordinator for the Arizona Center for Empowerment, a social justice organization.

The program has been under near constant legal scrutiny since its inception during the Obama Administration in 2012. DACA, or Deferred Action for Childhood Arrivals, provides relief from deportation and work permits to undocumented immigrants who meet a bevy of requirements, including proof of a highschool diploma or current school enrollment, arrival in the U.S. before the age of 16 and no felony convictions or three or more misdemeanors. Recipients must renew their applications every 2 years, and new applications have been blocked since 2021.

Muñoz said continued uncertainty is exhausting and disappointing for undocumented residents who submitted their applications but have yet to see them move forward. It’s not an inexpensive effort either, she added.

“People spend money on hiring lawyers for the initial application, they spend money to send it to USCIS (United States Citizenship and Immigration Services), they spend money to get their fingerprints taken. They send it over and are told it’s going to be placed on hold – and it’s been on hold for a while now,” Muñoz said.

While DACA recipients and hopefuls alike await a new ruling from Hanen, Muñoz advises that recipients renew their applications, even if they have some time left before their two-year deadline.

Applicants still awaiting a decision on their cases remain undocumented, however, and are at risk of deportation.

Oliver Escobar, 18, applied for the program in late 2020, when a New York District Court ordered the Department of Health Services to accept new applications, but Judge Hanen’s initial ruling in July 2021 froze many applications, including Escobar’s. While the college freshman hopes the program will be reopened and his case can finally reach a resolution, Wednesday’s decision paints a bleak picture.

And Escobar’s residency in Arizona is more tenuous now than ever. His mom, who brought him to Arizona when he was less than two years old, is facing the possibility of being remanded back to Guatemala, after a police officer ran her finger prints because of a car crash. Escobar worries he’ll be forced to leave, too.

“I can’t imagine being cut off and needing to head back to Guatemala,” he said.

Reyna Montoya, CEO of immigrant advocacy group Aliento, called on Congress to codify immigration reform, and said the ruling endangered both DACA recipients and first time DACA applicants who are still on hold, commonly called Dreamers, across the country.

“While the protections from the DACA program remain in place, at least for now, not only our DACA-mented community continues to be at risk, but approximately 80,000 Dreamers who applied for DACA have been placed on hold and remain undocumented and new applications are not being accepted,” she said, in a written statement. “We urge this administration to honor their word and work with Congress to implement a real path to citizenship for DACA-mented and Dreamer communities now.”

The future of DACA remains unclear, Montoya said, and returning the case back to Hanen could mean a swift end. Hanen could rule that Biden’s attempt to enshrine DACA as a regulation is just as unlawful as Obama’s 2012 memo.

“DACA continues to be under litigation. We just don’t know when or if it’s going to end,” she said.