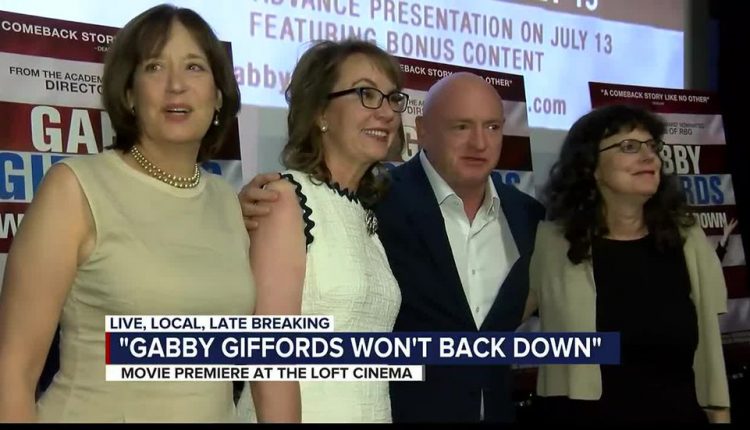 Roughly 250 people packed into the movie theater to watch the first screening of the documentary.

On Jan. 8, 2011, Giffords was hosting a “Congress on Your Corner” event at a Safeway parking lot when a gunman opened fire. Six people were killed, including a 9-year-old girl, and more than a dozen were injured. Giffords was shot in the head.

The former intern who helped save her life that day, Daniel Hernandez, attended Tuesday’s premiere.

“Everybody who was a part of the day that the shooting happened has their own way of dealing with things,” said Hernandez. “Some people are able to talk about it and others are not.”

Hernandez is one of three survivors featured in the documentary, along with lawmakers and former president Barack Obama.

However, central to the film is former astronaut and now Sen. Mark Kelly, who captured his wife’s rehabilitation. He joined her on stage as she introduced the documentary.

“[I’m] moving ahead no matter what,” Giffords said.

“I’m pretty sure this movie is going to hold up,” Kelly said.

After the shooting, Giffords spent six months in the hospital. The documentary shows the incredible determination she displayed in her efforts to speak and walk again.

“She is really a walking, living example of gun violence,” said Betsy West, who directed Gabby Gifford’s Won’t Back Down.

Giffords has turned her attempted assassination into activism, as she lobbies for gun legislation.

“Gabby is someone who barely survived being shot in the brain,” said Julie Cohen, who also directed the film. “Yet that episode, while it impacted her hugely, didn’t define her.”

Cohen says Giffords is defined by her “enormous spirit” and the hope she represents.

Another special screening will be held at The Loft Cinema on July 13. Gabby Gifford’s Won’t Back Down opens nationwide on July 15, and will play in more than 300 movie theaters.

‘Free’ Screening? Know Your Rights to Get No-Cost Care