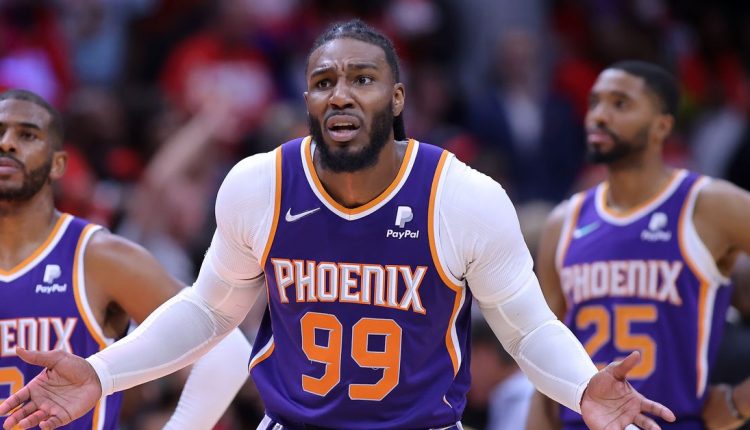 On Sunday night, the Phoenix Suns fell 103-118 to the New Orleans Pelicans in the Smoothie King Center behind a high-powered effort from the entire team and 30 points from Brandon Ingram. The series is now even, 2 games apiece.

Deandre Ayton started off hot again in the early-goings, scoring 10 of their first 16 points. Unfortunately for Phoenix, the Pelicans’ big 3 came out ablaze and seemingly couldn’t miss. CJ McCollum, Ingram, and Jonas Valanciunas scored each of the Pelicans’ 25 first quarter points, shooting 10-18 among the three of them. Conversely, Suns shot 64.7% from the field in the opening frame, but shot 0-5 from three and were within three, down 22-25.

Both teams came out with a lot of energy in the second quarter, but the Pelicans were simply getting more of their looks to fall, opening the frame on a 14-9 “run”. Suns responded with four straight points, prompting a Willie Green timeout.

As the final stretches of the half got a little chippy, Suns responded due in part to Cam Johnson looking a little bit more like his normal self (10 points, 2-5 from three in the first half), Jae Crowder made his first three of the series, and Ayton had an emphatic block to help prevent a Pels run.

At the break, Suns led by 2 led by Ayton’s 14 points and Chris Paul’s six assists. The New Orleans big 3 combined for 36 points in the half.

This helped start out chippy as well with the Pelicans simply jawing at Paul and others. The officiating disparity made itself more apparent as well, and Ingram just kept the heat coming, including 12 points and a monster dunk in the first 9:27 of the third.

As the third wound down, the only bright spots for the Suns were some nice moments from Torrey Craig and this dunk from Cam Payne as the deficit ballooned to double digits, 84-74 after three:

For possibly the first time in his Suns career, Paul really looked rattled in the early-goings of the fourth quarter, thanks to Jose Alvarado’s pesky defense, forcing an 8-second violation at one point, and later drawing a flagrant foul from Paul.

The rest of the fourth quarter played out sorta that way. Suns looked rattled by the physicality and intensity that the Pels — especially rookies Herb Jones and Alvarado — brought to the table.

Monty Williams — who earned a technical foul in the fourth quarter — waved the white flag with just over two minutes remaining, taking out the main rotation down more than 15 points.

As the TNT broadcast noted, Devin Booker isn’t walking through these doors to save the Suns. They’re back at the Footprint Center on Tuesday for game 5 at 7 pm on TNT, needing to win two of the next three to advance. Hopefully they can show up with a more focused and intense effort.

One dead, another hospitalized after fatal motorcycle collision in central Tucson | news