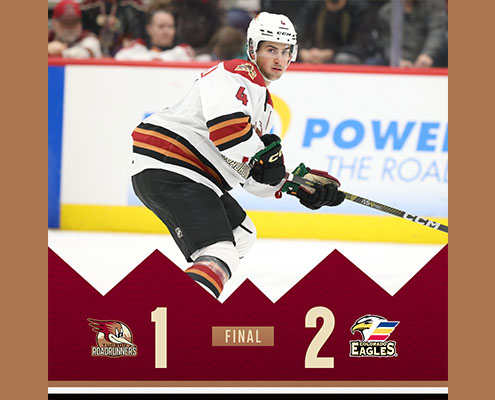 ROADRUNNERS OPEN 2023 WITH ONE GOAL LOSS TO COLORADO EAGLES

Tucson, Ariz. – The Roadrunners were narrowly defeated by the Colorado Eagles Friday night at the Tucson Arena by a score of 2-1, in the first of two meetings on the weekend with the AHL affiliate of the Colorado Avalanche. Each period featured a single goal, as Tucson forward Ryan McGregor tied the contest at 1-1 early in the second with his third goal on the season. Ivan Prosvetov opened the calendar year in between the pipes for the Roadrunners and stopped 25 shots including a perfect second period. Tucson outdrew the Eagles in trips to the power play and finished the night a perfect four-for-four on the penalty kill. The Roadrunners and Eagles wrap up the two-game set in the desert Saturday night at 7 pm

YA GOTTA SEE IT

Roadrunners forward Ryan McGregor evened the score at 1-1 in Friday’s series opener against Colorado with his third goal of the season. With 4:17 gone by in the middle frame, the goal was the fastest score to open a period on the night. The 23-year-old has four points over his last five outings on home ice with a pair of goals and a pair of assists. Assisting on the tally was defenseman Victor Soderstrom for his sixth point in as many appearances at the Tucson Arena.

IVAN IMPRESSES – Tucson netminder Ivan Prosvetov made the start between the pipes on Friday against the Colorado Eagles and stopped 25 of 27 shots faced. The effort marked Prosvetov’s ninth time allowing two goals or less in 19 total appearances this year, and the 23-year-old has surrendered three goals or less in three of his last four outings at the Tucson Arena. Prosvetov is familiar with the Colorado Avalanche organization, as three of his six NHL appearances to-date have come against the defending Stanley Cup Champions.

PHOTO OF THE GAME 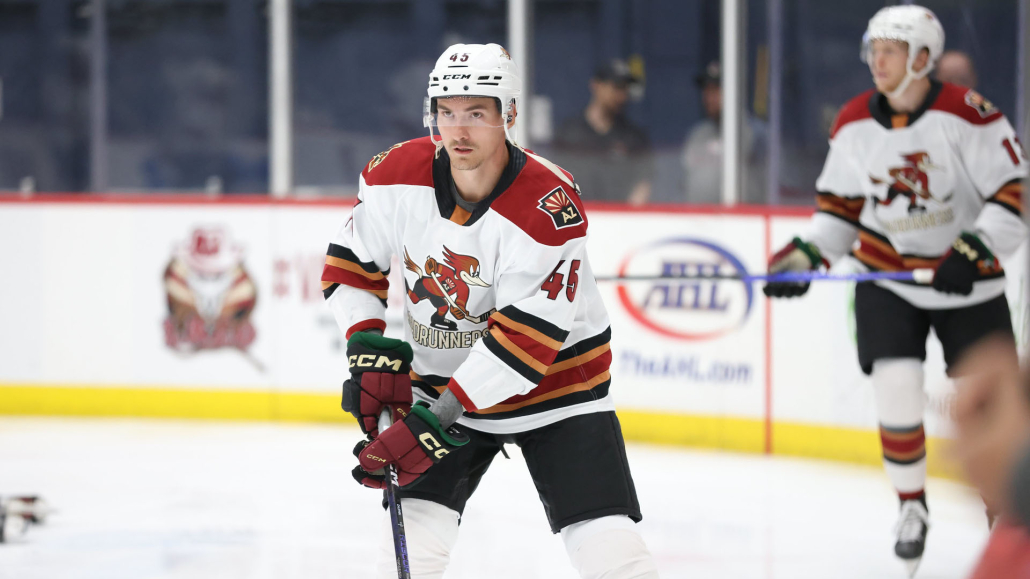 Forward Laurent Dauphin returned to the Tucson lineup Friday night for the first time since being recalled by the Arizona Coyotes on December 31 and led the Roadrunners with six shots on goal. Dauphin is tied with JS Dea for the active team lead in points with 12 goals and 15 assists for 27 total points in 27 total games. Prior to his second NHL call-up of the season, the 27-year-old had amassed 11 points (6g 5a) over a span of seven appearances with Tucson dating back to a three-point performance (1g 2a) on December 13.

“The amount of leadership and desire that [Adam] has been pretty impactful to our team. We’re very happy to have him back, and we’re looking forward to keeping him in the lineup.”

Roadrunner’s Head Coach Steve Potvin on Captain Adam Cracknell returning to the Tucson lineup for the first time since December 18.

The visiting Eagles jumped out to a 1-0 lead with a shorthanded score of 5:43 into the contest. The goal was scored on the first man-advantage of the night for either team by Colorado’s Callahan Burke for his tenth tally of the season. The Roadrunners stayed out of the penalty box in the opening period with both trips to the man-advantage, but trailed the Eagles 1-0 after 20 minutes of play. Tucson erased the one-goal deficit early in the second period, as Ryan McGregor took a pass in front of the net from Victor Soderstrom and buried it for his third goal of the year and a 1-1 tie 4:17 into the frame. With his 15th assist of the season on the score, Soderstrom notched his fourth point over the last five outings (1g 3a), while Cam Hebig recorded a point for the third-straight series opener with the other assist. A second consecutive one-goal period, this time in favor of Tucson, sent the Roadrunners and Eagles to the final 20 minutes of play still knotted at 1-1. Tucson and Colorado skated at even strength for the first half of the final frame, before a penalty on the Roadrunners sent the Eagles to the only man-advantage of the third period. With just under seven minutes remaining in regulation, Colorado netted a five-on-five goal in transition shortly after their power-play expired to end the longest scoreless streak of the contest at 28:46 and retake a 2-1 lead. The Roadrunners pulled goalie Ivan Prosvetov with less than a minute to go in the frame, but a 200-foot defensive effort by the Eagles kept Tucson from evening the score. A third-straight one-goal period capped off a 2-1 victory for the Eagles in Friday night’s series opener.