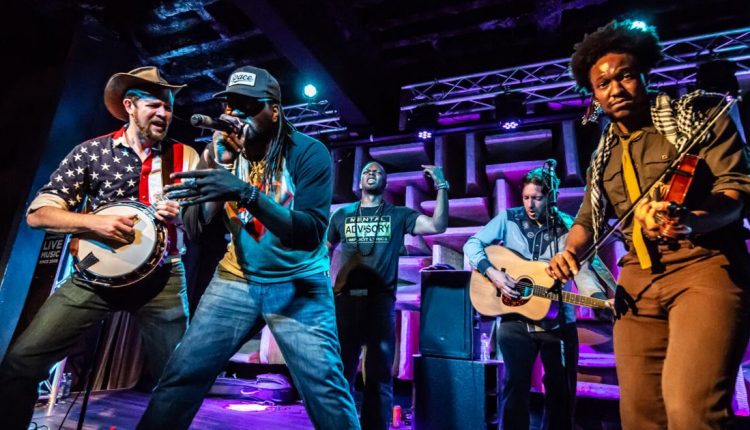 Marketing folks will tell you to identify your niche audience so you can speak directly to them.

But what if you’re a musician and you look out into the audience and see 80-year-olds jamming alongside 8-year-olds?

That’s a happy dilemma for the hip-hop bluegrass band Gangstagrass, playing its first-ever Tucson show at 191 Toole on Saturday, April 16.

“Marketing is tricky … because it’s kind of undefinable to say who shows up at a Gangstagrass show,” founder and chief beats producer Rench (aka Oscar Owens) said during a phone call in March. “They are definitely not one age or just men or women. Depending on where we are in the country, the racial demographics are different; it’s all over the place and that’s what we like to see, all these different people showing up to see what we are doing.”

Rench and the band — Dan Whitener on banjo, Brian Farrow on fiddle and MCs R-SON the Voice of Reason and Dolio the Sleuth — have been making a pretty persuasive argument for the marriage of bluegrass and hip-hop since 2011, when Rench wrote a song for the FX series “Justified” that launched the band’s career.

The song, which won an Emmy, came six years after Rench — who had been creating beats for hip-hop artists for years — had laid down a few bluegrass hip-hop tracks and put them on streaming services for public consumption.

The songs were hits and attracted the attention of the FX show right about the time that Rench was thinking that creating a band and taking the show on the road would be a pretty good idea.

His target audience for his pickin’ and rhymin’?

“I was thinking about myself,” he said. “For better or worse, I tend to just go out and make what I want to hear. When people show up, that’s always awesome to see that maybe other folks want to hear that, too.”

Gangstagrass’s sound fuses the acoustic glory of fiddle, banjo and guitar with hip-hop’s energy and and improv and pretty impressive vocals from the MC pair and banjo player Whitener.

R-SON — aka Randy Green — said that once you hear a Gangstagrass song, you’ll see how the marriage of bluegrass and hip-hop makes perfect sense in an imperfect world.

Both genres are based on storytelling and improvisation.

“They are way more similar than people would imagine them to have been,” said the Philadelphia resident whose parents threw in a little Dolly Parton and Kenny Rogers to the music they played around the house. “When you hear the idea of ​​the two together, it seems weird. But when you think about it and start to put them together, it works way more easily than one would have imagined before.”

On Gangstagrass’s 2020 album “No Time for Enemies” — which debuted No. 1 on Billboard’s bluegrass charts — the band focuses on stories that R-SON said have universal appeal.

“This is real life stuff. These are things that people have gone through and spoken about. It fits in lots of different parts of American life, regardless of where you are from,” he said.

COVID-19 is causing more type 1 diabetes in kids, who will be saddled with high insulin prices — unless Congress acts