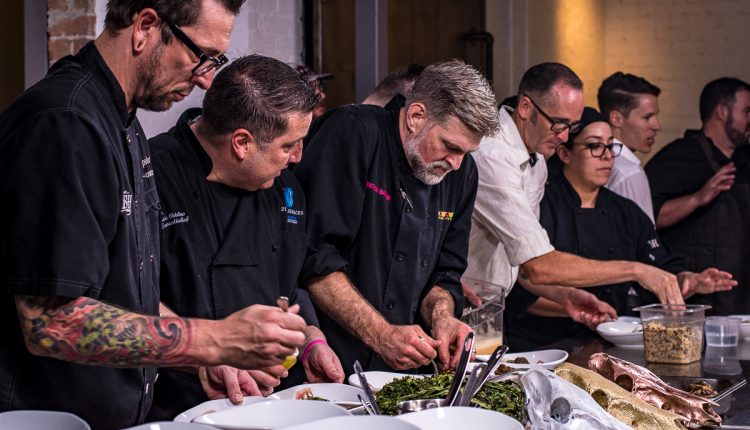 ‘GUT Goes to the Movies!’ kicks off the culinary extravaganza

There’s something wonderful going on with the Gastronomic Union of Tucson (GUT), and brace yourself because it’s the first time it’s happened since 2019. The collaborative endeavor, which is a cornucopia of more than three dozen of Tucson’s best-loved and most-acclaimed Chefs and food professionals are thrilled to announce the return of its summer series of pop-up dinners.

If you’ve never attended one of these magical meals in the past, or haven’t the slightest idea what they consist of, don’t worry about it because we’ve got all of the details for you.

These five-course meals, including welcome cocktails, hors d’oeuvre, and wine will take place monthly on Sunday, July 17, August 21, September 18, and October 30. There are a few themes going on this year, too, including GOES to the Movies!, Lost Restaurants of Tucson, Right Here Right Now — Hyperlocal and Seasonaland Culinary Legends of Tucson. (Photo courtesy of The Gastronomic Union of Tucson)

The first dinner, on Sunday, July 17 takes a culinary approach to the silver screen — no trick photography goin’ on here. The mise en scene will be beautifully crafted with GUT chefs collaborating to create dishes inspired by iconic films.

Each course honors a different film ranging from blockbusters to cult classics. Just imagine innovative tributes to Julie and Julia, Tampopo, Big Night, and Ratatouille. Oh, and Attack of the Killer Tomatoes will be rolling and tumbling into one of the courses as well. You can bet GUT’s dishes will turn this low-budget sci-fi film’s Rotten Tomatoes score into something fresh.

GOES to the Movies! will take place at Mountain Oyster Club, located at 6400 E. El Dorado Circle, and is open to the public. Those wanting to attend can snag tickets via Eventbrite for $90 per person, plus any applicable fees. Hors d’oeuvre will begin at 6 pm and make a note that seating will be limited and tickets are available while they last.

Chef collaborators for GUT Goes to the Movies! Include:

For more information and to purchase your tickets, visit eventbrite.com. More dinners to add to your calendar

The second dinner, on Sunday, August 21, will celebrate the Lost Restaurants of Tucson. So, for one night only, GUT chefs will summon up local nostalgia with some of Tucson’s iconic restaurants that have permanently closed.

The third dinner, Sunday, September 18, is named Right Here Right Now, setting his sights on the best ingredients farmed and foraged in the Tucson basin at the end of summer. Therefore, hyperlocal and seasonal foods will be the stars of the show.

The season finale is destined to be a complete “showstopper” — Culinary Legends of Tucson. As a dinner to benefit the 501c3 nonprofit Tucson: City of Gastronomy, GUT has enlisted the help of Carlotta Flores of the Si Charro! restaurants, Jonathan Landeen of Jonathan’s Cork, Jim Murphy of Kingfisher, Donna Nordin of Cafe Terracottalocal legend Janos Wilder of the former Downtown Kitchen + Cocktailsand Alan Zeman of fuego.

You know, it’s just an epic collection of living legends who’ve made the Tucson food scene into the internationally recognized hotspot of delicious food — that’s all. They’ll join forces with the chefs of GUT to create a dinner that won’t be easy to replicate.

The menus and ticket prices for the other summer dinners will be announced at a later time, but meanwhile, tickets for the GUT Goes to the Movies! dinner are available now at eventbrite.com.