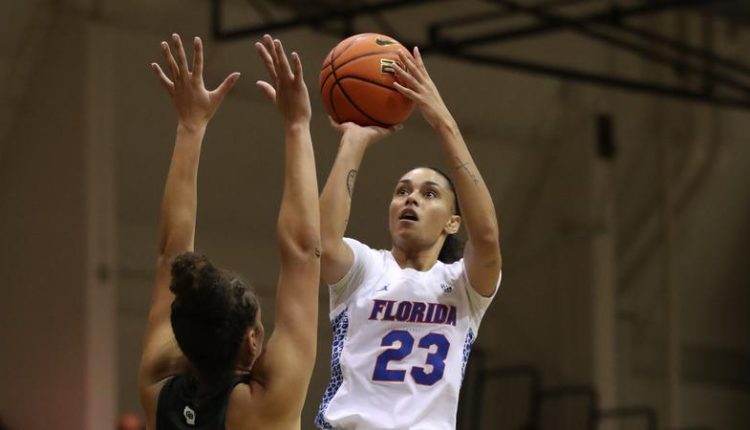 Green Bay did manage to control the glass on Thursday, outrebounding the Gators, 41-40. Merritt and Rickards each pulled-down seven to pace the Orange & Blue, while 17 of Florida’s rebounds were on the offensive end.

The Phoenix were led by Calle Genke with 10 points and six rebounds.

The Gators opened the game with the first four points behind a jumper from Rickards and two free throws by Dut, but the physicality of Green Bay began to push the Gators. The Phoenix put together an 11-0 run over the next 7:30 to claim an 11-4 lead, but Correa gave the Orange & Blue momentum off the bench right as the quarter ended, converting an and-one opportunity to make it 11 -7 after one.

Green Bay held Florida to just 2-of-16 shooting in the opening period.

Florida came back in the second quarter to even the game at 15 with 6:41 on the clock after an impressive up-and-under layup from Rickards. The game was knotted again at 17, but another spurt from the Phoenix, this time 12-0, extended their lead to 29-17 with 3:44 left before halftime.

The Gators didn’t lay down, however, responding with a 9-0 run of their own, capped-off by a Dut tip-in layup at the buzzer to end the quarter and cut the Green Bay lead to 29-26 heading into halftime. Correa ended the half with 12 points for the Orange & Blue.

It was a back-and-forth affair in the third quarter, with each team taking turns exchanging punches. Merritt tied the game at 29 within the first minute, but again the Phoenix responded with a 5-0 run to reclaim the lead. The Phoenix maintained a six-point lead with 5:50 to go before Correa knocked-down a triple, and Rickards followed-up with two free throws, to again cut the gap to one point. The opposing lead hovered at one point with under a minute left before a Green Bay layup gave them a 44-41 lead with 10 minutes to play.

Clinging to a three-point lead with eight minutes left on the clock, Green Bay began to feel the pressure of the Florida zone. The Phoenix, with 6:31 on the clock, then left Dut wide-open in the corner off of an inbounds pass, and the senior drained her second triple of the game to give the Gators a 51-49 advantage.

After finding the score once again tied at 52, the Gators secured the victory at the free throw line, ending the game on a 9-0 run with seven of those points coming at the charity stripe. After switching to zone in the second half, Florida held Green Bay to 9-of-25 (36%) shooting over the final 20 minutes.

The Gators will be back in action for game two of the St. Pete Showcase on Saturday, Nov. 26, against Houston at noon ET.

On fighting back from a slow start…
“That game was really important for our growth as a team. That was a really well-coached team, Green Bay is consistently a tournament team. They’re really hard to beat. It takes a lot of consistency, a lot of mental toughness , a lot of physical strength and balance, and to go 1-for-13 from three, I thought those were all good shots that we take.For being a neutral sight and performing as well as we did, showing the resiliency that we had , I’m really proud.”

– Florida now leads the all-time series with Green Bay, 3-0.
– Jordyn Merritt scored a season-high 17 points, helped by a career-best eight makes at the free throw line.
– Dut’s two triples match a career-best from Texas A&M on Jan. 3, 2021
– Florida has now had four scorers in double-digits for six-straight games, with the last time that occurred dating back to before the 1998-99 campaign.
– The Gators have forced 20 or more turnovers in five of their first six games, the first time since 2015-16 they’ve started that well on the defensive end.
– The Gators are now 17-0 under Kelly Rae Finley when holding opponents to under 60 points.