‘Getting harder and hotter’: Phoenix fire crews race to save lives in America’s hottest city | Arizona

The 911 call came in about an elderly man who had fallen outside a storage facility in central Phoenix. The fire crew, who are also paramedics, found 80-year-old Noel laid on his back on the concrete ramp under direct sunlight; he was weak, thirsty and very hot.

Noel, an Englishman with diabetes and hypertension, had been moving furniture when his legs gave way. Its core temperature was 104F—dangerously hot. (The typical range for a healthy older adult is 97 to 99F.) His blood pressure was also very high at 242/110, and his pulse was racing.

Noel had been lying on the piercing hot concrete ramp for about 45mins. A firefighter wrapped an ice cold towel around his neck and inserted IV lines into both arms. It was 3.30pm and the outside temperature hovered above 100F – below the average for the time of year in Phoenix, but several degrees hotter than the previous week when monsoon rains cooled the city.

This was not an isolated incident. 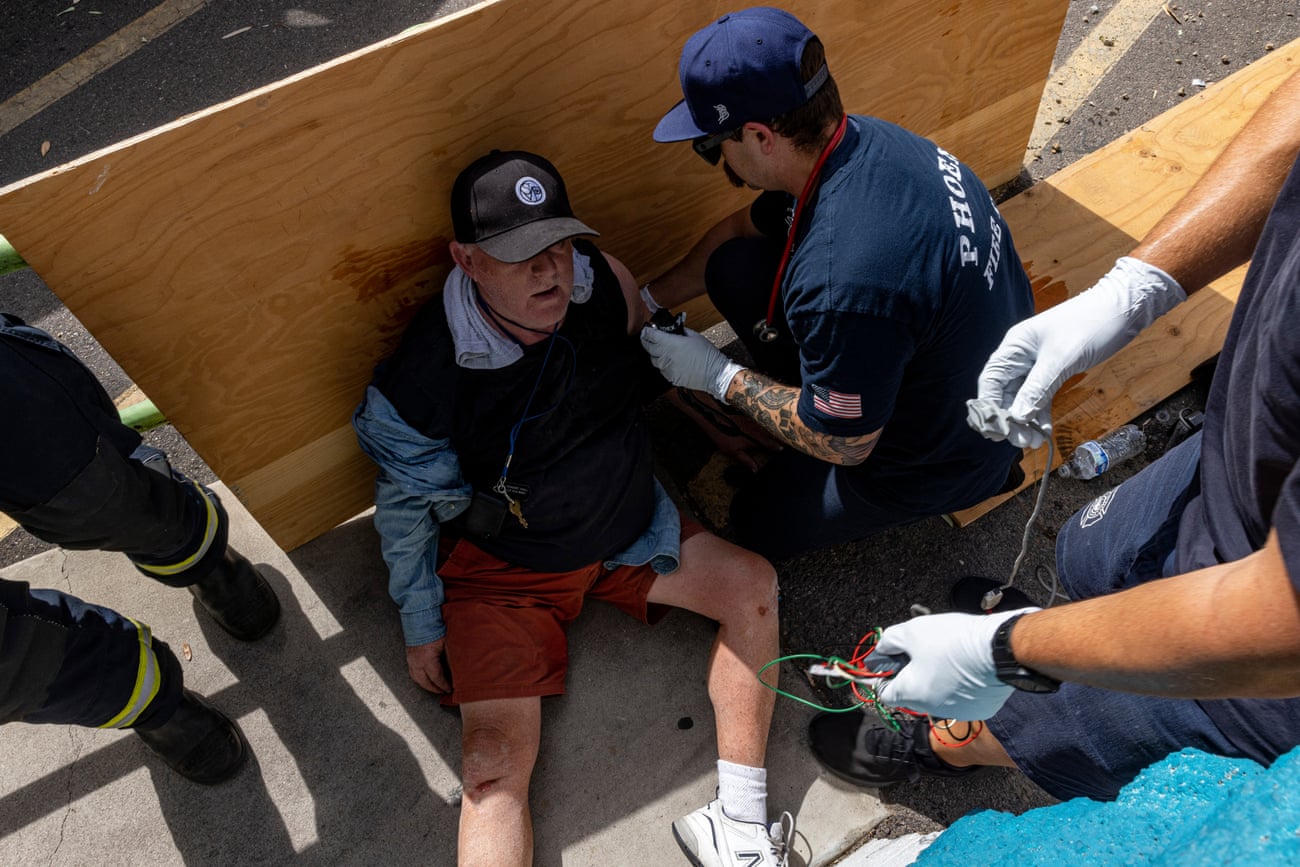 Firefighters/paramedics of Fire House 18 attending to Noel, who was suffering a heat illness. 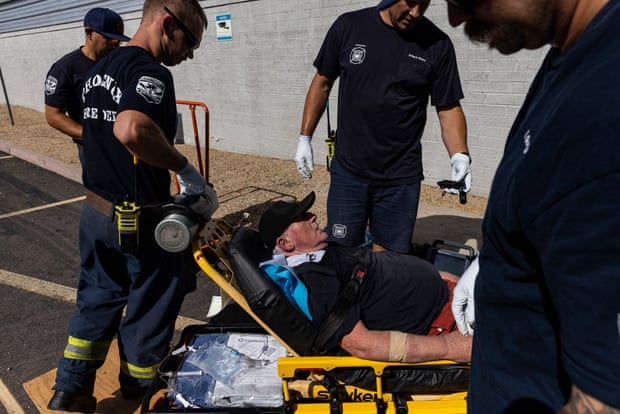 Noel had collapsed outside a storage facility, where he had been moving things for three hours in 100F.

So far this year, 1,215 emergency calls have been designated by dispatch as heat-related – a 34% increase on the same period in 2020, and 18% more than last year. The 911 dispatch data showed 11 heat calls that day but didn’t include Noel, suggesting the actual numbers could be higher.

Hotspots include areas where the city’s growing unsheltered population are concentrated, but calls are spread across the metropolitan area.

Heat can kill, so once the call comes in it’s a race against time.

The ambulance arrived within 5mins, and the crew helped Noel onto a gurney and into the air conditioned vehicle, where they placed ice packs under his armpits and on his chest. He was hooked up to a cold saline IV drip to start cooling down his core temperature. 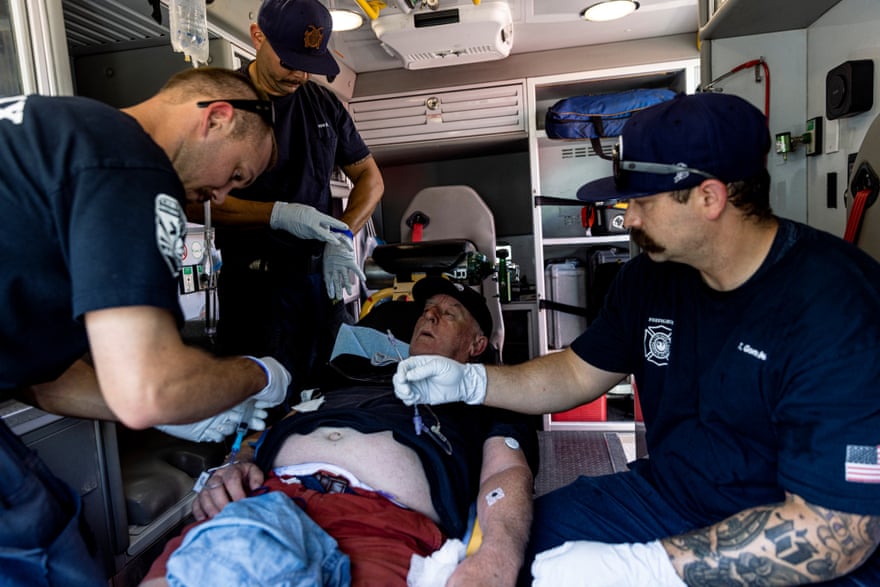 Paramedics try to cool Noel’s temperature with a cold wet towel around his neck and IV cold fluids before heading to the hospital.

“I feel so stupid, I pushed myself too hard,” said Noel, who was lucid but could barely open his eyes as the paramedics turned on the sirens and sped off to the ER.

It’s getting hotter in America’s hottest city, and the fire service is on the frontline of dealing with heat related emergencies.

So far this summer, almost half the US has been under a heat advisory at one point or another, with record daytime temperatures from the Pacific north-west to Kansas and Oklahoma in the midwest to Texas and Phoenix in the south and New England and Philadelphia in the east.

But the scale of the health burden – the impact of heat associated deaths, injuries and illness on individuals and services – is not fully known due to variations in the way incidents are investigated and recorded at the local level.

The Guardian recently shadowed a crew at fire station 18 in central Phoenix on three separate days in order to better understand the impact of extreme heat on first responders.

Station 18 is the busiest in Arizona, with two trucks and two ambulances covering a densely populated section of the city with few trees but plenty of strip malls, low income apartment blocks and a growing homeless population. Each vehicle has an ice chest with cooling towels, bottled water and saline packs for heat calls.

Three teams – the A, B and C shift – work 24 hours on, 48 hours off, although many do overtime as citywide, the service is short staffed. The station mascot is a bedbug, an ode to the frequent encounters with the tiny blood suckers. 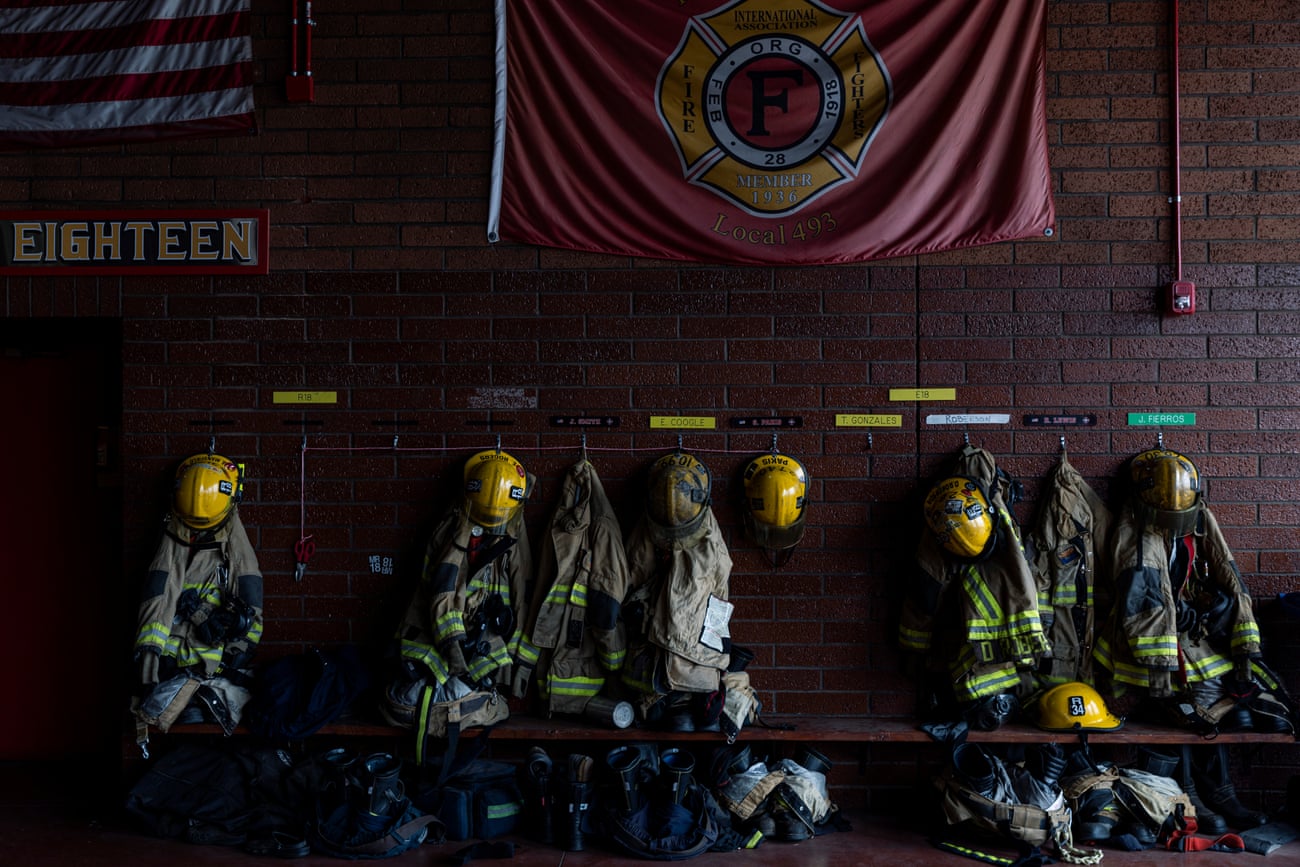 By the end of July the B shift, which The Guardian followed, had at least five patients – two women, three men – with core temperatures over 108F – which is when their thermometer maxes out and simply reads ‘high’. All were unconscious and needed intubation (help breathing).

In one case a passerby called 911 after spotting a man face down, unconscious behind a wall. His core temperature at the hospital was 112F – the hottest so far this year.

The crew ripped off his clothes, placed cold towels and ice packs under his armpits, groin, and neck, and administered cold IV fluids through a hole drilled into his shin. He had no gag reflex when the crew tested it, and burn blisters on his arms and neck.

In the ER, he was put inside a body bag filled with ice, what’s known as a hot pocket, in a last ditch attempt to cool him down. A catheter was inserted to remove any hot urine before transferring him to the ICU.

“You could feel the heat coming off his body … we do everything we can but it’s very hard to come back from that temperature,” said Brennan Johnsson, 27, who’s assigned to an ambulance.

Last year’s record for Johnsson was a young homeless woman in her 20s, whose core temperature was 114F. He’s relatively new to the service and remembers all the heat calls. 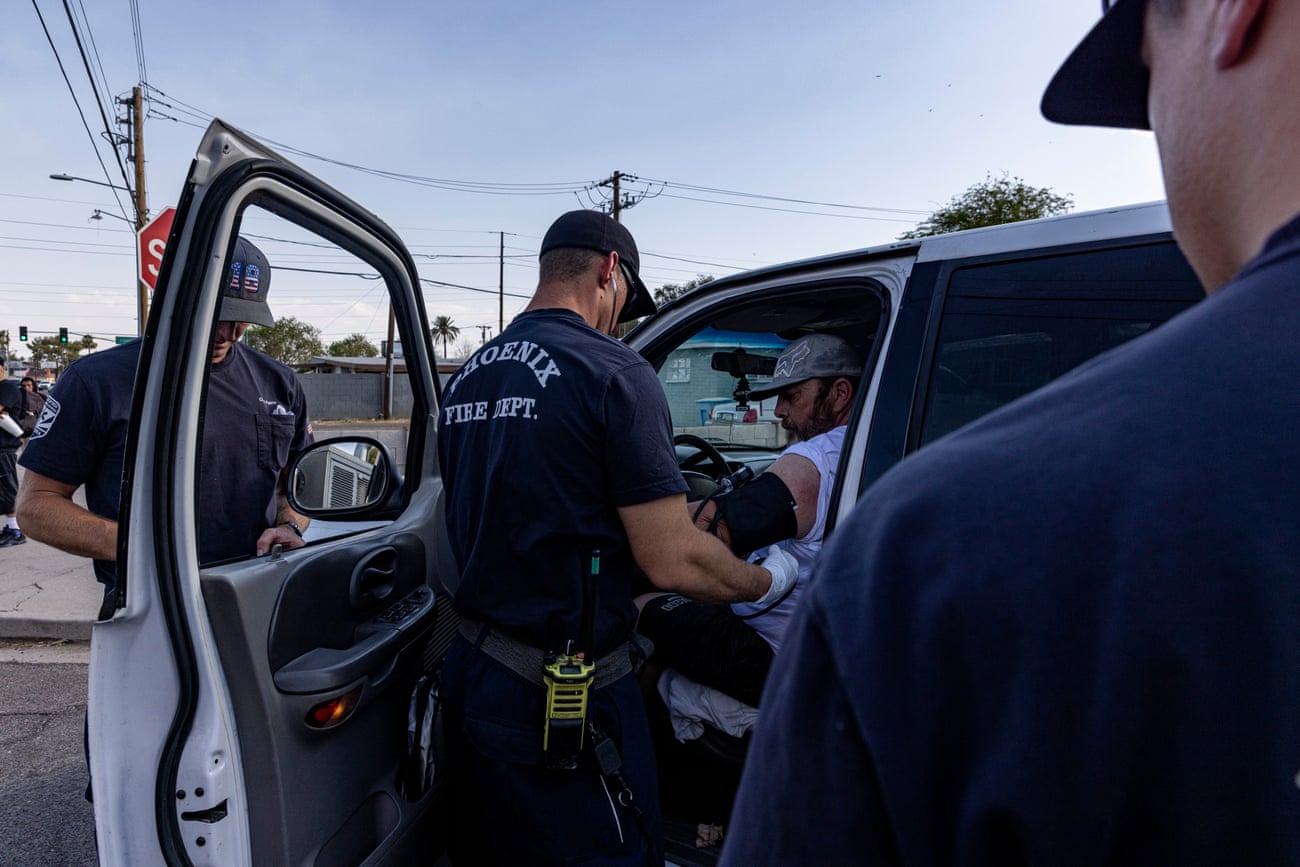 Firefighters/Paramedics from fire station 18 attending a man who passed out in his car (with no air conditioning), possibly due to a fentanyl overdose. Photographer: Adriana Zehbrauskas/The Guardian

Excessive heat can exacerbate chronic medical conditions such as diabetes, heart disease and asthma, while some drugs – prescription and illicit – can elevate the risk of heat illness. Public health experts agree that heat associated morbidity and mortality is preventable, but socioeconomic risk factors such as homelessness, addiction and fuel poverty are rising.

Since records began in 2014, there have been just three days during the months of June and July with no 911 calls for heat illness in Phoenix, according to an analysis by APM Research Lab shared with the Guardian.

“Heat affects so much of what the fire service does,” said Rob McDade, the fire department’s public affairs chief. “This environment can be very inhospitable and it’s getting hotter.”

It was around 1pm and 106F when the fire alarm sounded, triggering a Pavlovian-type response from the guys (the crews are all male) who were cleaning up after lunch. The alarm for a fire is distinct to a medical call, and within seconds all four crews were en route with sirens and lights blazing, pulling on heavy protective gear as they rode towards the smoke.

Lofty flames emanated from an air conditioner on the roof of a gift store, the corner unit of a strip mall. Old AC units can overwork, overheat and catch on fire. 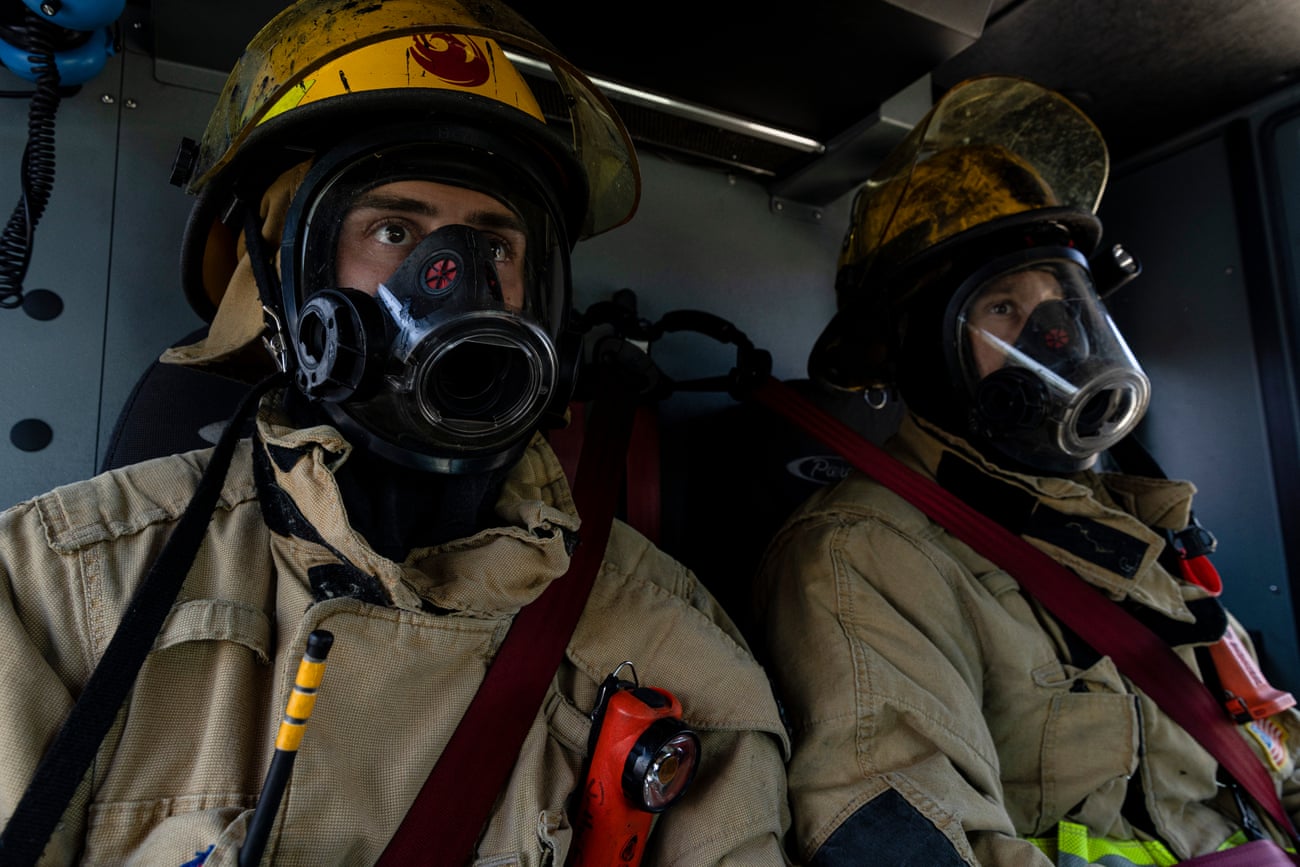 It was the third week of June, and by 2pm it was 110F outside. The captain pulled out the crew battling the blaze after about half an hour: when it’s this hot outside, they fatigue faster and it’s harder to cool down. As another team took over inside, the station 18 crew stripped down, poured cold water over their heads and chugged water and Gatorade. Half an hour later, they went back inside.

As temperatures rise every summer, more fire crews are needed to make sure they can be rotated every 30mins. At one point, there were seven fire trucks and three ambulances at the scene.

“If you get too hot or dehydrated, it’s game over,” said Brian Peter, a ladder specialist from a neighboring station. 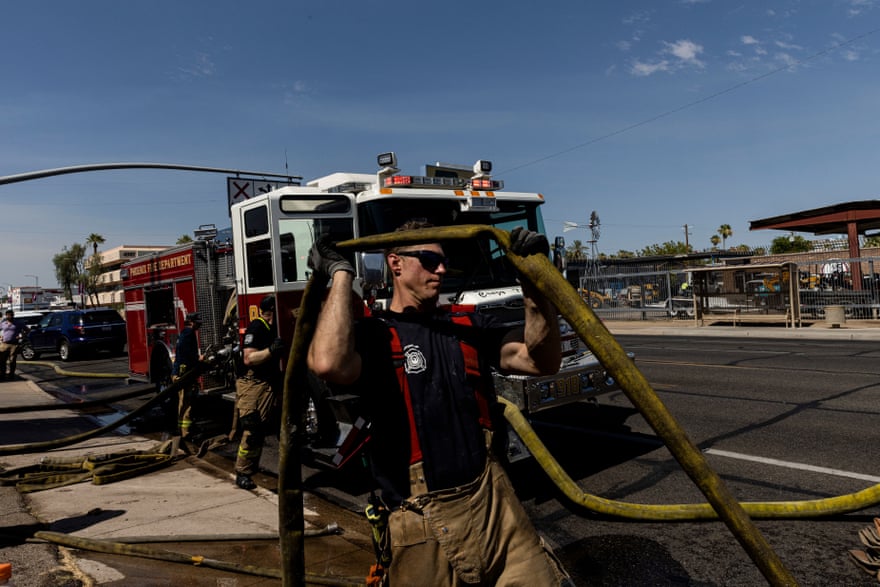 Phoenix fire house 18 firefighters at the scene of a fire in an antique shop. 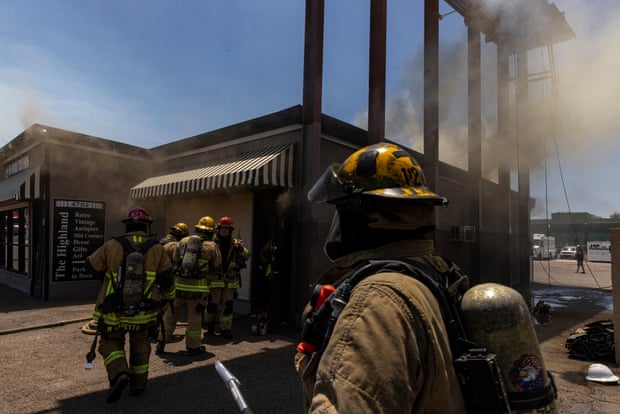 Phoenix, Arizona, Jun 16 2022: Phoenix Fire House 18 firefighters putting out a fire in an antique shop in Phoenix, AZ. A possible cause was the AC overheat due to intense heat.

Training is key. As a desert city, Phoenix gets relatively cool in the winter, so when temperatures start edging back up, the firefighters must re-acclimate to extreme heat.

Outside at the station building, a whiteboard details the skills training regimen which includes dragging tires, ladders and sledge across the carpark in full gear – twice when the temperature is below 105F, once when it’s above. Station 18 is a teaching hub, and rookies train for hours listening to thrash metal, while the crews make time between calls, cooking, gym workouts and occasional power naps.

“The summer months take a physical toll. Maybe it’s my age, but it’s definitely getting hotter and harder,” said Tim West, 39, a captain with 16 years in the service who said he loses five to 10lbs every year. 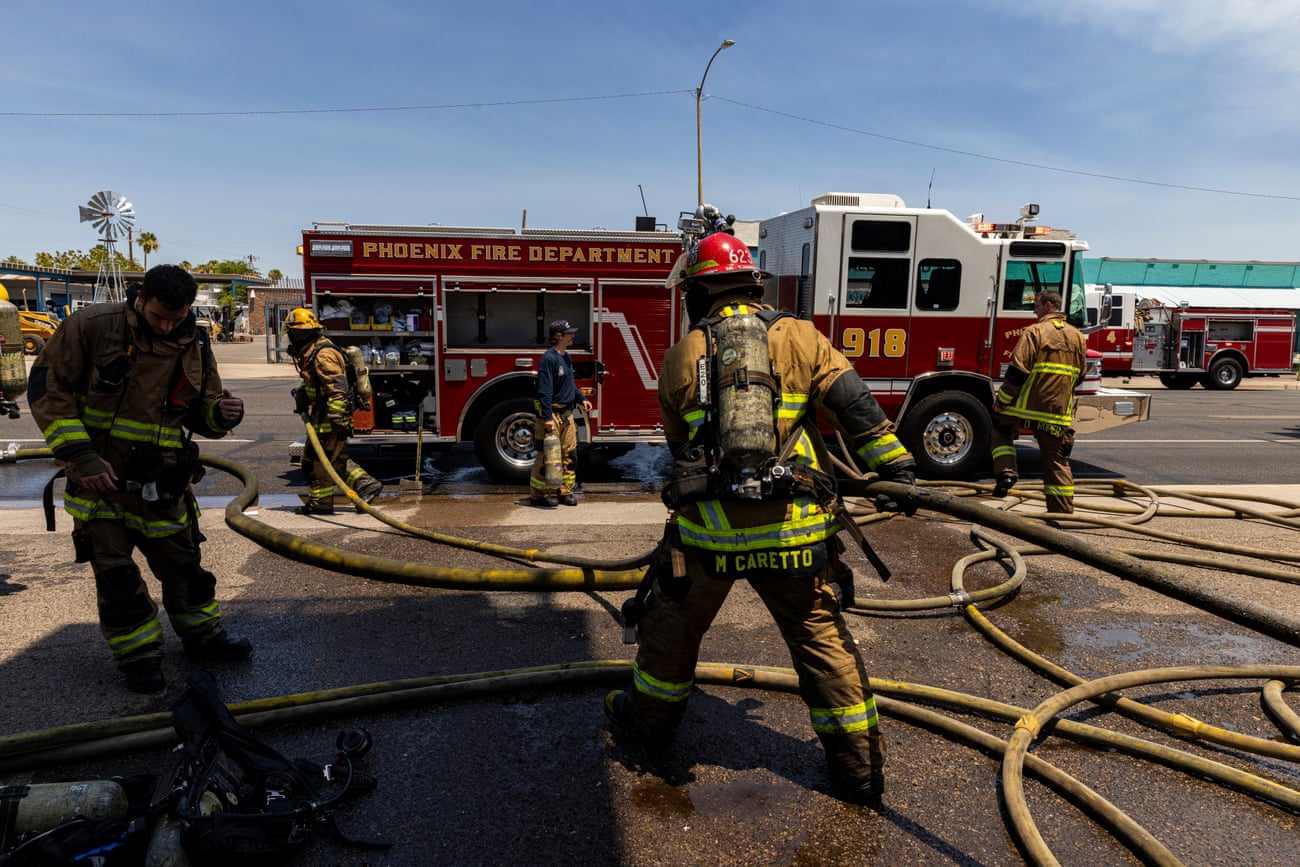 Phoenix fire house 18 firefighters putting out a fire at an antique shop.

It’s not just his age. On 13 July 2022, dispatch recorded 52 heat calls – the highest number since records began in 2014. Five of the 10 highest heat call days have been this year, APM Research Lab found.

Overheated hikers are among the most costly and challenging calls, and last summer four firefighters were hospitalized after conducting mountain rescues in triple digit temperatures. It’s not just badly prepared out-of-towners, a sprained ankle or snake bite can also turn into a heat emergency as hikers can be hard to reach.

As a result, some popular trailheads now close when the National Weather Service (NWS) issues a heat advisory.

“Hiking calls put a lot of stress on some teams, 100%,” said McDade. “But heat trickles down into everything we do.”

Firefighters/Paramedics from fire house 18 in attending to a woman who was sick, possibly poisoned by chemicals used to exterminate bed bugs. 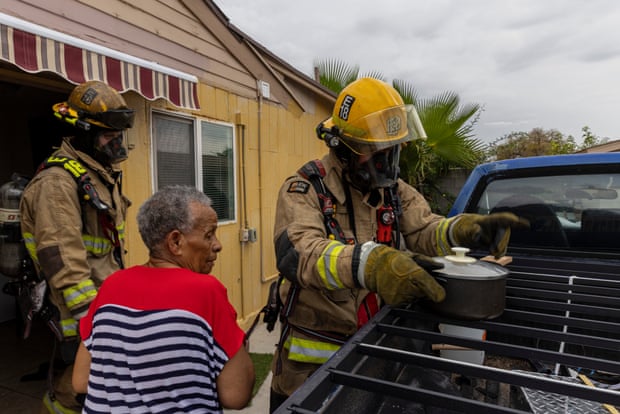 Firefighters/Paramedics from fire house 18 in Phoenix attend to a woman who was locked out of a home while a pan was on the stove.

On a hot day, any call can turn into a heat emergency.

A person injured in a traffic accident or a homeless person without shade or adequate clothing can end up with severe burns if their skin is in contact with a hot surface like a road or bench. “If the body is sandwiched between the ground at 150F and direct sunlight, it won’t end well,” said Johnsson.

In Phoenix, the trifecta of extreme heat, homelessness and substance misuse have contributed to hundreds of preventable deaths in recent years.

In one call the Guardian attended, a security guard at a Circle K convenience store found an unresponsive man who had been smoking fentanyl. In another, a recently evicted man with sores over his arms and legs was responsive but confused . Intoxicated individuals can easily overheat, burn and become dehydrated without realizing, but neither wanted to go to hospital, which is pretty much all the fire crew can offer. 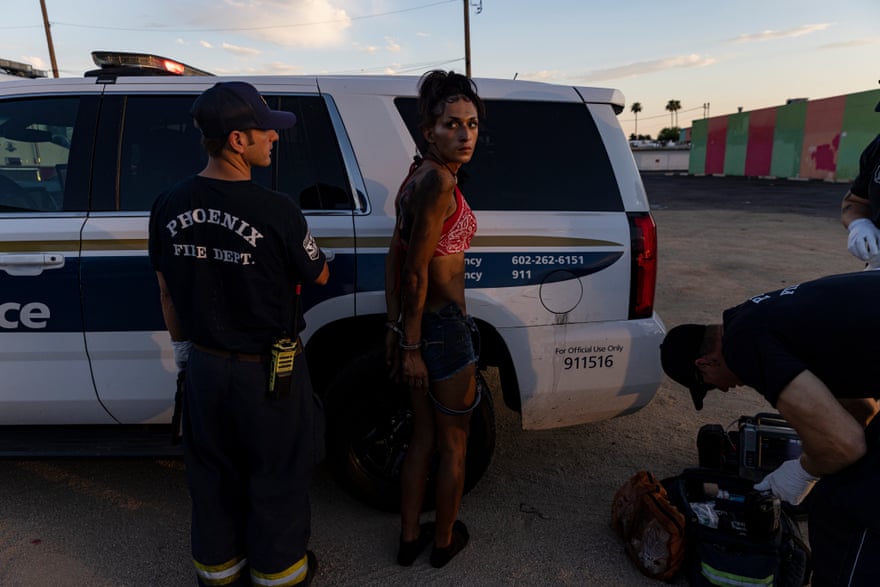 Firefighters/Paramedics from fire station 18 attend to a woman detained after trespassing private property.

But some of the worst heat emergencies this year have come after sundown.

In June and July 2022, the nighttime low in Phoenix didn’t fall below 80F on 45 occasions, including 11 nights over 90F. Nighttime temperatures in Phoenix are rising twice as fast as daytime temps, according to the NWS. The impact of heat is cumulative, and the body only starts to recover when it drops below 80F.

Bar chart of the number of days with nights above 80F in Phoenix.

Last month, the crew responded to what dispatch said was a traffic accident involving a cyclist. It was around 8.30pm but still very hot, and the man had collapsed with heat stroke. He was confused and combative, his core temperature 107F. “At that time, it should be the home straight, people think they’ll be okay,” said firefighter Geoff Pakis, 40. “Heat deaths are 100% preventable.”