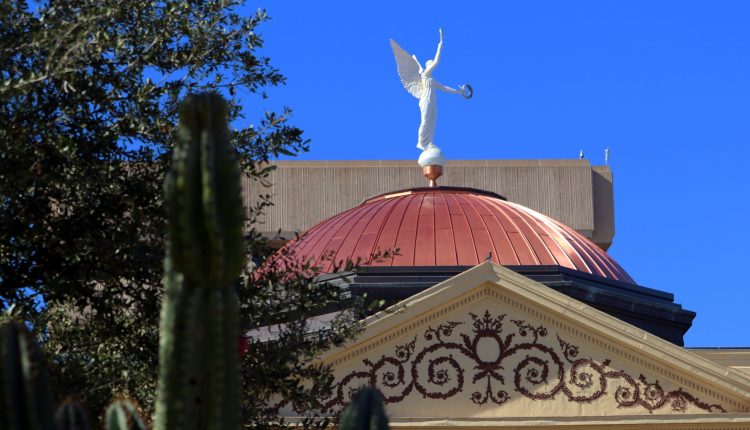 GOP budget plan derails amid fighting between the Senate and House

A $15.6 billion budget that Republicans crafted won approval in the House Appropriations Committee only to come to a screeching halt in the Senate, where GOP leaders accused top House Republicans of breaking a deal to advance unrelated bills.

More than 4 hours after the Senate Appropriations Committee took an unexpected recess after considering a single budget bill, Chairman David Gowan reconvened the panel and declared that its work was done for the day.

Gowan, a Republican from Sierra Vista, didn’t detail what happened, but alluded to Senate bills being held up in the House Rules Committee by its chairman, Rep. Travis Grantham. Gowan said the House had agreed to let some bills advance to the floor for consideration by the full body.

But because that didn’t happen when the Rules Committee met in the early afternoon, Gowan said his committee wouldn’t act on the budget today.

That all leaves the fate of the budget uncertain, even as the state hurtles toward a July 1 government shutdown if no spending plan is in place.

The late-afternoon tumult capped off a day that started promising for Republicans. When the House committee began debating the budget, it quickly became apparent that it wouldn’t be a GOP-only spending plan.

Rep. César Chávez, D-Phoenix, voted for the budget package, explaining that he was backing the budget to ensure there was no government shutdown on July 1, and that the Republican-crafted budget was better than no budget.

Republicans desperately need Democrats to support the budget, as several Republicans have publicly said they oppose it — and with a single-vote majority in both legislative chambers, that means GOP leaders must get at least some small amount of Democratic buy-in.

But even that prospect seemed dimmer only hours after Chávez joined Republicans in backing the budget during the Appropriations hearing.

In a statement on Twitter following the committee, Chávez seemed to backtrack, writing that he wasn’t committed to voting for the budget when it is considered by the full chamber — and that he would vote against it if common ground on education funding couldn’t be reached between the two sides.

“There is no reason as to why we can’t pass a budget that focuses on Arizona’s priorities. Today, we can accomplish that by working together. If we cannot reach a consensus to ensure that public education is amply equipped, I will vote in opposition to the #AZLeg budget,” he wrote.

There is no reason as to why we can’t pass a budget that focuses on Arizona’s priorities. Today, we can accomplish that by working together. If we cannot reach a consensus to ensure that public education is amply equipped, I will vote in opposition to the #AZLeg budget.

The Republicans opposing the budget include Rep. Jake Hoffman, from Queen Creek, who voted against the budget package in the Appropriations Committee because he said it isn’t fiscally responsible to increase spending by some $2.2 billion over the current year.

“I think that this budget hurts our state,” he said. “We’re in the midst of what’s likely a sustained recession. We’re going to have serious economic destruction in our state.”

Hoffman chastised Regina Cobb, the Republican chairwoman of the committee, and other GOP leaders for failing to craft a budget that would win the support of all 31 Republicans in the state House and instead including provisions aimed at picking up a small number of Democratic votes.

“I can’t think of anything more fiscally irresponsible than spending recklessly on member pet projects while Arizonans struggle to keep up with crushing inflation,” she wrote on Twitter after the budget was released late Monday.

In a follow-up tweet, she compared the budget to the Build Back Better Act that President Joe Biden failed to push through Congress, labeling it the “Build Back Broke” budget.

“You cannot spend your way out of a looming recession,” Ugenti-Rita wrote.

The budget includes new funding for K-12 education, pay raises for all state employees, increased spending on higher education, money to address a nursing shortage in Arizona and more. It also accounts for a separate bill that will spend $335 million on border security, including construction of a border wall.

But Democrats on the legislative panels complained about how the Republicans opted to spend the state’s record budget surplus — which budget analysts now peg at nearly $5.7 billion, up from $5.3 billion just a couple months ago — and pleaded with them to engage in earnest bipartisan negotiations.

Rep. Jen Longdon, a Phoenix Democrat and the assistant minority leader, repeatedly asked Cobb and the other Republicans to meet with Democratic leaders.

“A good budget is a good compromise. My caucus has not been brought to the table to be a part of that compromise,” she said.

Rather than negotiate with Democratic leaders in either chamber, Republicans sought out individual Democrats they believed would be open to working with them and got their input, incorporating their priorities into the budget.

Rep. Michelle Udall, a Mesa Republican, told Longdon those conversations had been going on “for well over a month” and GOP leaders made a concerted decision to avoid bringing Democratic leadership into the fold because their demands wouldn’t have been reasonable.

💯 This is how it works. Corporate Dems fracture to sell out for crumbs and compromise the ELECTED leadership of the caucus’s ability to negotiate for big items. https://t.co/I6EXYAhfET

Republicans are also hedging against the budget deal falling apart. In addition to the budget plan that would spend $15.6 billion, the committees also approved a “skinny” budget that would merely maintain current levels of spending.

That roughly $12.5 billion package, which the House panel rejected in April, would spend none of the $5.7 billion surplus and is intended as a fail-safe to ensure government operations don’t cease.

“That’s why this is here,” Cobb told the committee.

How one of Arizona’s fake Trump electors, Ginni Thomas and an email platform for activism are connected