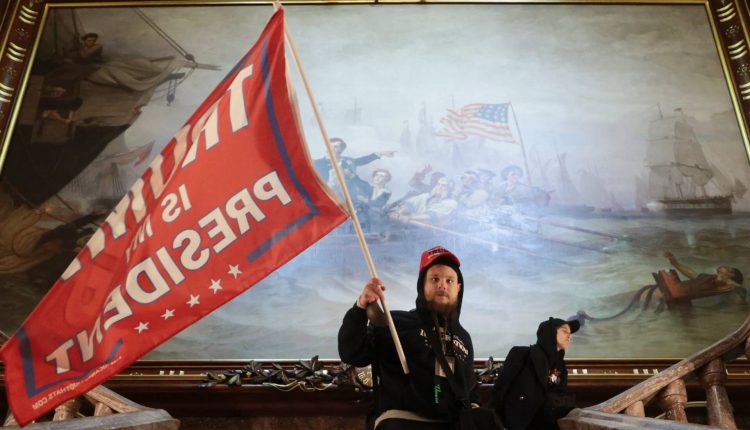 A rally planned for Saturday at the Arizona Capitol that aims to support “political prisoners” of the January 6 insurrection will feature speakers who are white nationalists, have endorsed Nazi ideology and are facing charges for storming the U.S. Capitol alongside GOP legislators.

The event is organized by a group that boasts two officials from the Arizona Senate’s election “audit” on its leadership team.

One of the speakers, “American Greyson” Arnold, has used his social media pages to post memes lauding Nazis as the “pure race” and lament the American victory in World War II. He also called Adolf Hitler a “complicated historical figure.”

Arnold is one of several announced speakers at a rally organized by a group called Look Ahead America, which is run by Matt Braynard, the former director of data and strategy for Donald Trump’s 2020 campaign. Arizona’s rally is one of several being held across the country, and comes a week after a rally Braynard planned in Washington, D.C., on Sept. 18 largely fizzled.

The most recent slate of speakers also includes Republican state legislators Mark Finchem and Wendy Rogers — the former was at the Capitol on Jan. 6 and the latter cheered on the violent failed coup on social media — U.S. Senate candidate Jim Lamon, and congressional candidates Jeff Zink and Eli Crane.

The lineup also includes Micajah Jackson, who is facing federal charges for storming the Capitol on Jan. 6. The FBI alleges that Jackson participated in a march alongside members of the Proud Boys chapter from Arizona and that he entered knowingly without permission.

GOP officials will share the stage with avowed white nationalists

Jackson’s online persona regularly shares conspiracy theories, and both he and Arnold are considered “Groypers,” a subset of the white nationalist community who often troll conservatives who they feel are not extreme enough. Though loosely organized and members of many different groups, groypers are almost all followers of white nationalist Nick Fuentes.

One of the main goals of groypers is to push conservatives in a white nationalist direction and one of their strategies is by presenting their views in a mainstream appearance or within mainstream organizations.

Arnold hosted an event at Lake Havasu earlier this year inspired by Fuentes dubbed “White Boy Summer.” The idea was co-opted from Chet Hanks, son of actor Tom Hanks, who had published a series of social media posts critiquing white men’s attire and behavior and later dubbed the summer of 2021 “White Boy Summer.”

White nationalist and white supremacist groups co-opted the slogan as a call for action. Arnold’s “White Boy Summer” event in Havasu featured Jackson as a speaker.

And two officials from the Arizona Senate’s self-styled “audit” of the 2020 election in Maricopa County hold leadership posts in Look Ahead America, the group organizing Saturday’s rally.

Senate “audit” liaison and former Secretary of State Ken Bennett is the “state chairman” for Look Ahead America, while Julie Fisher, his deputy liaison, is the group’s “state operations coordinator.” Fisher also worked for the Trump campaign in Arizona in 2020.

Bennett told the Arizona Mirror that he is on a “leave of absence” from the organization to focus on the election review, and was not involved in planning the event or choosing the speakers. He did not respond to additional questions about the speakers or their support of extremist and racist ideology.

Rogers, Finchem and Lamon did not respond to a request for comment about Arnold’s past comments.

Direct ties to the failed coup

Jackson isn’t the only speaker tied to the violent insurrection that aimed to stop Congress from certifying Joe Biden’s election victory.

Finchem attended Donald Trump’s rally earlier that day and marched to the Capitol. Although he insisted that he never got within 500 yards of the Capitol building, footage emerged months later showing he was directly in front of the east steps at the Capitol after pro-Trump rioters had already broken through a series of barricades and police lines, and then smashed their way into the Capitol building.

And Zink, who is running for Congress against Democratic Rep. Ruben Gallego, has connections to the events: His son was arrested for trespassing, assault and damaging property. Zink has said that his son is falsely accused, but the FBI contends that photos from his son’s own Facebook page and security camera footage put his son at the scene and show him damaging property.

Lamon, who is vying for the GOP nomination to challenge Democratic U.S. Sen. Mark Kelly,  has given millions of dollars to Looking Ahead America, according to reports by independent journalist Hunter Walker and Axios.

Concerns over security at the Sept. 18 event in D.C. prompted a large police presence, although only a small number of people eventually showed up. The permit for Saturday’s event at the Arizona Capitol said the group expects only 50 people to show up.