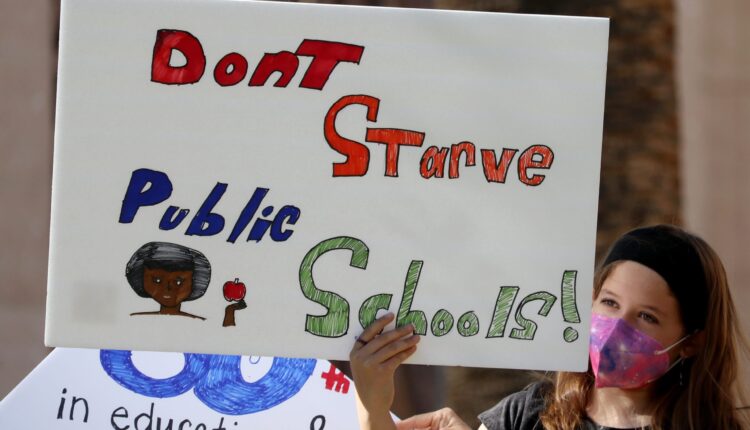 An impending school funding ceiling is one of the first hurdles on the legislative agenda, and while schools are facing nearly $1.4 billion in budget cuts if it isn’t lifted, Republican legislative leaders say they will take action — just not immediately.

At issue is a spending cap in the Arizona Constitution called the aggregate expenditure limit, which voters approved in 1980, that constrains how much schools can spend based on enrollment. A confluence of factors in the past few years has caused schools to bump up against that limit for the second year in a row.

Proposition 301, a 0.6 cent sales tax approved by voters to raise education funds, expired in 2021. While lawmakers approved an identical replacement in 2018 ahead of that date, those funds — which last through 2041 — were never exempted from counting towards the spending limit like they were under the citizen-backed proposition. Add to that a record $1 billion boost in K-12 spending in the state budget last year and now schools find themselves roughly $1.4 billion dollars over the cap — dollars they can’t spend unless the legislature takes action by March 1.

This year marks the fourth time that schools have been poised to hit the spending cap: Lawmakers previously lifted the limit in 2002, 2008 and 2022.

Two resolutions to raise the cap have been filed by Republican lawmakers so far, but they require a two-thirds majority in each legislative chamber. And the party’s top leaders want to wait.

On Monday, shortly after Gov. Katie Hobbs’ state of the state address in which she spoke about the urgency of the looming school funding crisis, House Majority Leader Leo Biasiucci, standing next to Senate Majority Leader Sonny Borrelli, said Republicans refused to be hurried along.

“Hear us now: Schools will not lose out on the money we’ve allocated for them. We will address this, but we will not rush the process,” he said in a video response to the speech.

Republicans: Transparency is on the table (maybe)

Borrelli assured the Arizona Mirror that the cap would be overridden in time, but wouldn’t rule out adding caveats to that effort, like calls for increased transparency in schools — a repeated request from some conservative lawmakers amid concerns about perceived social agendas in schools. The Senate Republican Caucus Majority Plan included transparency in its list of concerns to address for the legislative session. Lifting the AEL, however, is not included in the plan’s listed priorities.

House Speaker Ben Toma, meanwhile, dismissed the idea that transparency efforts could be in play, saying the funding limit is an entirely separate issue. Still, he said that he was in no rush to address the impending budget cuts, adding that the legislature has a successful track record for resolving it.

“We’ve always done it. It’s always gotten done, and we will get it done,” he promised.

Last year, lawmakers narrowly avoided missing the deadline by just days before the limit was overridden.

Republican Rep. David Cook, who sponsored the first resolution to raise the limit, said that lifting the spending cap is imperative, especially for rural communities like Globe, which he represents. Globe Unified District stands to lose as much as $2.3 million, and while that pales in comparison to bigger districts like Mesa Unified, which is looking at a nearly $84 million cut, Cook said rural districts often feel the impacts more acutely.

“A million dollars to the city of Globe is probably like $40 million to Mesa or Phoenix,” he said. “We do a lot with less, and so we shouldn’t be playing politics with money that the legislature has already approved and funded for these school districts.”

Our gratitude extends to the point where we can actually pay teachers with the money you gave us.

We’ve always done it. It’s always gotten done, and we will get it done.

Cook said he strongly disagrees with colleagues who are demanding transparency provisions in exchange for letting schools spend the money they’ve been given. If public schools must contend with increased transparency, so should the private schools who accept money from the controversial school voucher program that lawmakers made available to every Arizona student last year, he said.

An identical second resolution was filed by Rep Matt Gress, R-Phoenix, who noted in a press release touting the action that he separately “supports passage of other transparency measures that allow parents and taxpayers to know where the money is going and what kids are learning”.

For Arizona School Boards Association lobbyist Chris Kotterman, that’s the frustrating sticking point. Over the years, Republican politicians have repeatedly cited concerns about what’s being taught in classrooms and who’s actually getting paid — administrators or teachers — when defending a reluctance to increase education funding. This is despite the many state and federal expenditure reports public schools are required to fill out, the numerous board meetings on which books and topics being taught are discussed, and the fact that average administrator salaries statewide have dipped compared to average teacher salaries.

“We say, ‘We need to pay teachers more,’ and then they say, ‘Well, pay administrators less.’ And we say, ‘We are paying administrators fairly, they’re not getting overcompensated,’ and they say, ‘Well, we need more transparency,’ and we say, ‘What more can be transparent’? It becomes a stalemate. It doesn’t feel like there’s any amount of documentation that will satisfy this need for transparency,” Kotterman lamented.

For schools, it’s critical that the legislature lift the spending cap as soon as possible. Kotterman said some school districts are in a troubling bind, because they approved pay raises on the gamble that the limit would be lifted last year, after lawmakers ironed out a promise from then-Gov. Doug Ducey to call a special session to do so in exchange for a bipartisan budget.

That promise, however, did not come to fruition and now the new legislature has been saddled with the responsibility. The schools who used the money are faced with the prospect of taking it back in furloughs and pay cuts, while the schools who didn’t use it are left with increasingly neglected staff.

“(The AEL) creates a lot of uncertainty in the community, among teachers and staff especially,” Kotterman said. “And we can ill-afford to have people think that working in schools means you might not get paid.”

During his State of Education speech to the Senate Education Committee on Wednesday, Republican Superintendent of Public Instruction Tom Horne urged lawmakers to lift the cap, warning that an already dire teacher shortage would be worsened if schools are forced to lay off staff towards the end of the year.

Turnover rates for teachers in Arizona are high, at 19% — double the national average of 8% — and a current shortage means that as much as 28% of all positions across the state are vacant. Parents are expecting functioning schools and ensuring students have access to a quality education is a nonpartisan endeavor, Horne added.

Kotterman said eliminating the uncertainty altogether would be ideal, either through a full repeal of the constitutional provision or a recalculation to pin the formula to a more recent school year’s baseline instead of basing it on spending levels in 1980.

“The AEL is 40-plus years old,” he said. “It’s outlived its usefulness at this point.”

Some lawmakers agree. Cook said he is working on measures that would present voters with the choice to repeal the aggregate expenditure limit entirely. (Because it’s a constitutional provision, any changes or repeal efforts must be approved by voters.)

Democrats also have legislation to repeal or amend the AEL. Rep. Nancy Gutierrez, D-Tucson, and Sen. Christine Marsh, D-Phoenix, each have introduced measures asking voters to do away with the school spending limit. Marsh also has a measure that would ask voters to recalculate the limit to be based on modern school spending levels.

Rep. Jennifer Pawlik, D-Chandler, is also crafting a resolution to recalculate the expenditure limit. She said she’s hoping to spearhead an effort to exclude the 0.6 cent sales tax from the formula altogether and add student weights to the formula, noting that some students are more expensive to teach due to special learning needs and schools need extra support that doesn’t put them in violation of the limit. Her approach is just one of many, she said, and the point is to provide a host of choices so that something eventually gets done.

“What I intend to do is reform those three items,” she said. “There may be other members who want to take it further and completely repeal it. I think it’s good to have many options, and we’ll see which one appeals to more members of the legislature.”

A fight on the horizon: parties at odds

The new political dynamic at the state Capitol may result in some back-and-forth over key issues — and the handling of education funding is an increasingly hot button topic.

In her State of the State speech, Hobbs criticized her Republican predecessor’s expansion of school vouchers, and the years of leaders ignoring school needs that resulted in “crumbling infrastructure and crowded classrooms”.

That criticism didn’t sit well with Republicans, who’ve laid claim to last year’s record investment in schools. The only reason the limit is a problem today, they say, is precisely because of that budget — passed in a Republican majority legislature and signed by a Republican governor.

“We’re at this expenditure because we’ve dumped a ton of money in (schools) — that was all Republican efforts,” Borrelli told the Arizona Mirror.

“We’re here because of all the funding increases that we’ve made,” echoed Toma.

Unsaid, however, is that GOP leaders for months resisted calls from a small number of Republicans to add hundreds of millions of dollars in new school funding, relenting in the final days of the legislative session when it became clear that Democratic votes would be needed to pass the budget. Only then did they agree to the roughly $900 million in new K-12 spending.

Kotterman disputed the GOP’s framing, saying that, while schools are certainly grateful for the record budget increase, it ignores the decades of underfunding that came before.

Funding increases, he added, are really only useful when they can be spent.

“It’s a small consolation that they appropriated all this money if they try to retroactively claw back ($1.4) billion dollars of it,” Kotterman said. “Our gratitude extends to the point where we can actually pay teachers with the money you gave us.”

In the end, it matters little who is responsible for investing in schools when a funding cliff needs resolving. Former Democratic state Sen. Sean Bowie, who was central in securing last year’s budget as well as Ducey’s worthless promise to lift the AEL, expects that the legislature and governor will eventually come to an agreement.

“If you look at the magnitude of the problem —- a $1.4 billion impact —- that’s a lot of money for school districts around the state, including in Republican areas,” he said. “I think something like the AEL transcends partisanship.”

Cook added that voters in the midterm elections delivered a clear message to legislators: Get things done. Bickering from either party instead of addressing real issues isn’t what they’re interested in, he said.

“We have the opportunity to show Arizonans what they have voted for,” he said. “They want to go to work, they want to be focused on their jobs, their careers and their families, and yet they need to be worried that we’re not going to do our work to keep their kids in school and educated? I don’t think so. I think people want to see problem solvers, not creators.”