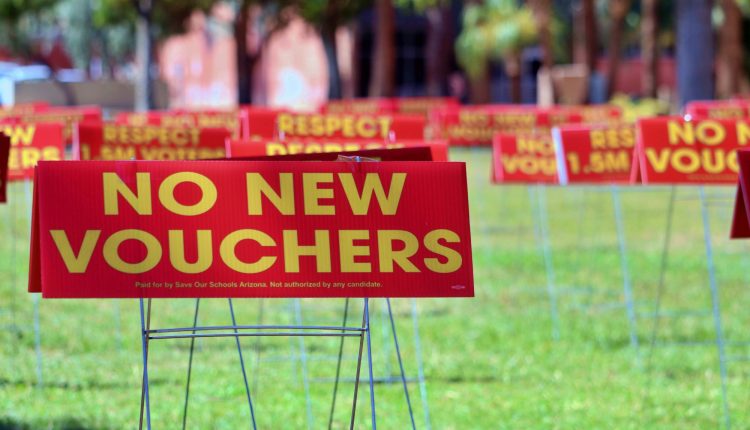 A proposal to let all 1.1 million Arizona students use taxpayer-funded vouchers to attend private school passed the Arizona House of Representatives Wednesday after two Republicans who had opposed previous efforts to expand the program changed their position.

The Empowerment Scholarship Account program, commonly referred to as ESAs, has been narrowly implemented since its creation in 2011. Eligible students include children attending failing public schools, children whose parents are in the military, kids who are in the foster care system and students living on Native American Reservations. Currently, roughly 11,800 students are enrolled and receive the voucher money.

But House Bill 2853 would allow every Arizona student to get an ESA account — including those who already attend private schools — to pay for their education.

Legislative budget analysts have said that only an estimated 25,000 students would likely take advantage of the expanded eligibility.

ESA dollars can be spent on anything a student needs, from tuition for a private school to tutoring or to homeschooling materials.

“If you are a millionaire or a billionaire and your kid goes to private school today, you will now receive a check to subsidize them,” Rep. Reginald Bolding, D-Laveen, said. “We have one of the lowest per-pupil funding ratios in this country, and what we chose to do is to make it even worse by taking more resources out of our general fund.”

Voters could have the final say on the fate of HB2853: Save Our Schools Arizona has said it will launch a referendum campaign to repeal the expansion, if it becomes law. If the group can collect enough signatures within 90 days of the end of the legislative session, the ESA expansion wouldn’t go into effect unless voters approved it in 2024.

“The House’s passage of voter-rejected universal ESA vouchers underscores the Republican majority’s utter disregard for AZ voters,” Beth Lewis, the executive director of Save Our Schools Arizona, a group that was formed to fight expansions to the ESA program, said in a statement to the Mirror. “They are bought and sold by special interests who do not have our children’s interests at heart.”

In 2017, Save Our Schools Arizona successfully referred a different ESA expansion to the ballot, and voters in 2018 overwhelmingly rejected the voucher program.

The bill passed the House 31-26, with only Republicans supporting it. It now moves to the Senate, where it is expected to pass. Gov. Doug Ducey, who has championed ESAs and other school-choice measures, would then decide whether it becomes law.

Prior to hearing the bill, the floor session was delayed as a last-minute rule change was debated among members that limited debate on each bill to 30 minutes, after which lawmakers would be barred from explaining their stance on bills.

Democrats tried to force debate of the new rules, but were swiftly overruled. And members of the audience, including many teachers and public school advocates, had to be reined in by House Speaker Pro Tem Jeff Weninger, R-Chandler, as they cheered and applauded members of the Democratic caucus who spoke against the ESA bill.

“It’s like a U2 concert in here,” Weninger quipped, reminding those in attendance to not clap or cheer.

During the 30-minute period of debate on the ESA expansion bill, Democratic lawmakers pointed out provisions that would allow for a “predatory market” to take over and criticized the GOP’s attempt to inject accountability into the program.

The bill requires the newly eligible students to take a national standardized test every year. But those test scores would largely be kept secret: The aggregate scores at a school would only be provided to ESA parents who ask, and only if the school has at least 50 students attending with ESA funds.

The state would not be able to see those scores, which Democrats said would block lawmakers and state officials from seeing if the ESA spending was actually translating into better education.

And that, in turn, creates a scenario where unscrupulous people could open private schools in an attempt to cash in, they said.

“There are no barriers for entry into this marketplace,” Rep. Lorenzo Sierra, D-Cashion, said. “If I am a predator looking to make money, this is how I’m going to do it.”

The lack of accountability is what previously had held back the support of Republicans Joel John, Joanne Osborne and Michelle Udall.

After the bill was considered in committee last week, Udall told the Arizona Mirror that the testing provision is too weak and “will not prevent bad actors from taking advantage of children and parents.” Instead, she said that private schools accepting ESA money ought to be required to test all of their students — and report those scores to the state.

“Without this type of academic accountability there will be schools that open, market aggressively, and don’t teach the academics they’re being paid to teach,” she said, adding that the proposal would lead to profiteering at the expense of students and parents.

But on Wednesday, Udall voted for the bill, as did John and Osborne. Osborne was the only one of the three who explained her vote on the floor.

“Quite frankly, there is a point when people in this body must say, we need to govern and we must listen to all the voices in this state that is very divided,” Osborne said. She thanked Rep. Ben Toma, the Peoria Republican who spearheaded the ESA bill, for his work and added that the bill includes a large portion of money for public schools, as well. That is not ture; the bill does not include any funding for public schools.

A companion measure that would have added $400 million to K-12 funding — about half of it in a one-time boost — if the ESA expansion becomes law was passed in the same committee last week, but it was not heard on the House floor today. Toma previously said in committee that the second bill was “an incentive” to mollify ESA opponents.

Proponents of the measure said the bill is about school choice.

“This bill has the greatest accountability of all: The parents can choose a school, they can not choose a school,” Rep. John Kavanagh, R-Fountain Hills, said. “One size does not fit all and we need to give parents and students two things…we need diversity and we need pro-choice.”

Rep. Jake Hoffman, R-Queen Creek, said he attended both public and private schools but blamed the “woke agenda” of public schools for the legislature needing to expand ESAs for parents to have school choice for their children.

“I don’t have any problem with our public schools, except when they go down the ‘woke agenda’ that they’ve been going down recently,” said Hoffman, who has proposed bills aimed at “anti-wokeness” in schools. “Public sentiment against public schools hasn’t been lower than it has been now.”

The ESA expansion comes amid the backdrop of a historic budget surplus — an estimated $5.3 billion, or about 40% of the current year’s spending. It also comes five years after voters rejected a similar measure to expand the voucher program.

“This is not the same measure in 2017, it was a flawed measure,” Toma said in a closing statement on the vote. “Parents are the ultimate accountability, not the government and we should trust them to do the right thing.”

After the vote was tallied and the measure was approved the gallery began shouting “shame” at the lawmakers who then promptly took a break from considering legislation, including the state budget.

The Phoenix Theatre’s ‘¡Americano!’ is paving the way to Broadway with ‘hope at its best’