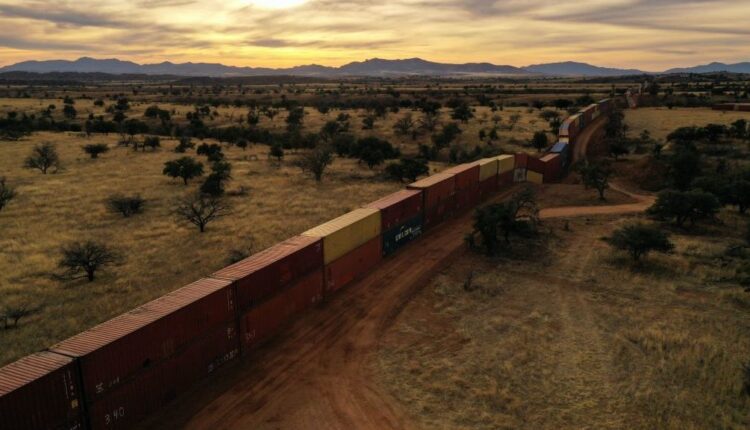 PHOENIX—Arizona Gov. Doug Ducey agreed Wednesday to dismantle portions of his shipping container border barrier, while the federal government committed to putting up new wall in the Yuma area.

The stipulation is the byproduct of a lawsuit the US government filed last week over construction Ducey authorized on federal land. The Department of Justice would have moved for a temporary restraining order if the agreement wasn’t reached, according to the filing in US District Court for the District of Arizona.

“For more than a year, the federal government has been touting their effort to resume construction of a permanent border barrier,” CJ Karamargin, Ducey’s communications director, told KTAR News 92.3 FM in a statement Thursday.

“Finally, after the situation on our border has turned into a full-blown crisis, they’ve decided to act. Better late than never.”

At Ducey’s direction, crews started installing shipping containers to close off gaps along the Arizona-Mexico border in August. Construction started in Yuma and moved on to other sections of the border.

The work placing up to 3,000 containers at a cost of $95 million was about a third complete, but protesters concerned about its impact on the environment held up work in the Coronado National Forest recently.

Per Wednesday’s agreement, the state will remove the containers from federal property in the US Border Patrol’s Yuma Sector by Jan. 4, “to the extent feasible and so as not to cause damage to United States’ lands, properties, and natural resources.”

The state also agreed to call off construction in the Coronado National Forest and work with the US Forest Service to determine the best way to remove the containers and equipment safely and while minimizing damage to natural resources.

Wednesday’s agreement indicates that US Customs and Border Protection will begin construction on an engineered barrier in the Morelos Dam area of ​​the Yuma Sector. There is no mention of when that will start.

“We’re working with the federal government to ensure they can begin construction of this barrier with the urgency of this problem demands,” Karamargin said.

The resolution comes two weeks before Democrat Katie Hobbs, who opposes the construction, takes over as governor.

Yuma County Supervisor Jonathan Lines told KTAR News’ Arizona’s Morning News on Thursday that he was pleased with the developments.

“It’s a shame … that the state of Arizona had to do the job that the feds wouldn’t do,” he said.

“But part of the agreement stipulates that upon removal of these containers, that the federal government must complete the wall.”

Supporters of Ducey’s shipping container barrier said the work is a matter of security and deters illegal immigration, human smuggling and drug smuggling. Opponents worried about environmental damage and argued that the activity on federal land is illegal.