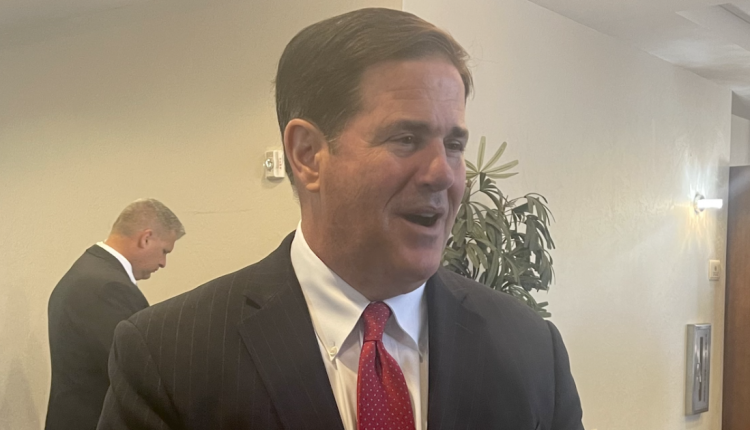 Arizona Governor Doug Ducey visited Yuma on Thursday to deliver his final state of the state address as he prepares for his last year in office.

Governor Ducey says education continues to be one of his top priorities. He says school funding has grown by billions since he took office in 2015.

Ducey says the state’s education system has grown more than any of its counterparts in other states, despite a teacher shortage. He adds the state has plans to deal with that.

“We’ve also created the Arizona Teachers Academy, which has now graduated thousands of young people where they graduate debt-free and will commit to teaching in the Arizona Public School for five-plus years, along with the teacher pay raise. So, we are going to hit it, all the above and we need to recruit more teachers for this. I do think some of the flexibility some of the innovations in K12 education that we’ve talked about attract more people into teaching and get them a better salary in that profession.”

The governor also addressed Yuma County’s veteran population, noting a proposal to honor them, and others throughout the state, with tax breaks on their military pensions.

Ducey also touted the state’s GI Bill, that allowed veterans to attend Arizona state universities and community colleges free of charge, as well as program to do the same for military spouses.

Earlier this month, Ducey launched a plan to double veterans in the workforce. The multi-year, interagency veteran hiring initiative aims to increase the percentage of veterans in the state’s workforce from 8.5 percent to 15 percent by 2025.

On border security, the governor continues to call out the Biden administration for lack of action along the US-Mexico border in Arizona. Ducey says he will continue to send Arizona National Guard troops to provide backup to federal Border Patrol agents, but says there is little he can do to stop the drug and human traffickers from creating what he calls a humanitarian crisis in Yuma County.

“To hear it firsthand from the men and women who work every day on the on, the border is really heartbreaking. It is shocking to me. That the Biden administration will not provide more support or quicker action on all these issues across the board, we see that the number one cause of death in southern Arizona is fentanyl, and it is streaming across our southern border in Arizona. So, we are going to continue to deploy the National Guard. Have the border strike force and support law enforcement, but there’s a protocol and there’s a law that people have to follow post-screening and that’s what the federal agents do.”

In October 2021, Ducey announced an investment of $30 million to help keep the Lake Mead reservoir from dropping to critical levels, a major step forward, he says, in the long-running effort to protect the Colorado River system, a vital source of water for Yuma’s agriculture.

“Well in terms of addressing the water management and water augmentation for Yuma, I believe our plan around desalinization is something that will secure hours on its water future for the next 100 years. We have $1 billion available. I am going to work with Speaker Rusty Bowers and President Karen Fannon, leaders, both Democrat and Republican, to get that done.”

Ducey says he has 300 plus days left in office and intends to finish strong. He says this is not his last trip to Yuma, as he plans to come back soon, and looks forward to partnering up with leaders in the community to solve problems and improve the local quality of life.

When asked about future plans, Ducey continues to say he will not run for a US Senate seat this year. “I’ve answered this question. The answer hasn’t changed.”