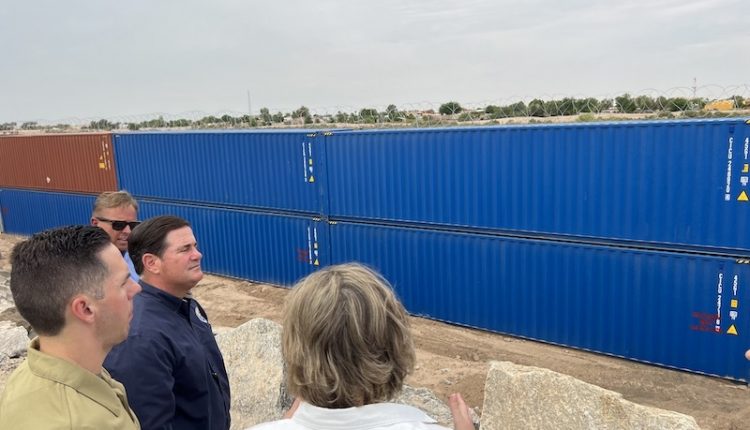 YUMA — Governor Doug Ducey today celebrated the installation of shipping containers in gaps on Arizona’s southern border, saying they have helped bring additional safety and security to Yuma and other communities.

“Last time I stood along the border here in Yuma, multiple migrants crossed the border into Arizona illegally — right in front of us,” the governor said, near the Morelos Dam with the double-stacked shipping containers behind him. “Now, 130 shipping containers fill border wall gaps that were previously wide open for dangerous cartel activity and illegal entry into our nation.”

The governor, joined by state and local officials, surveyed some of the 3,820-feet of border barrier constructed last month, and spoke with local law enforcement and community leaders about how the strategy has assisted their efforts.

“It’s not a permanent solution. No one said it would be. But these containers have helped make it harder to get into our state illegally,” the governor said. “Migrant traffic is funneled to a few select spots, allowing Border Patrol to focus their limited resources.”

Yuma County Sheriff Leon Wilmot thanked the governor and agreed that the shipping containers have helped him keep Yuma safe.

“The border barrier helps put a stop to the revolving door for the cartels that has been the southern border,” the sheriff said. “Yuma area law enforcement has been greatly impacted and has dealt with an increase in trespassing calls, criminal damage cases, 911 calls for rescues in the desert, and 50 death investigations this year. Governor Ducey is a true partner to law enforcement and has prioritized our well-being and ability to do our jobs.”

The fast-moving Yuma Border Barrier Mission was launched when Governor Ducey issued an Executive order directing the Arizona Department of Emergency and Military Affairs to immediately fill the gaps in the Yuma border wall. The project was funded through the state’s monumental border security legislationforged in partnership with legislative leaders this year.

“Our Emergency Management team was charged with the coordination of efforts in filling gaps in the border wall,” said Maj. Gen. Kerry L. Muehlenbeck, the Adjutant General of Arizona and Director of the Department of Emergency and Military Affairs, “We are proud to collaborate with our multiple state and federal partners to facilitate the efficient use of state resources and provide support to our communities.”

The Yuma Sector has been one of the hardest hit areas for migrant traffic and drug trafficking.

“The Yuma community has been put at risk and overburdened for far too long,” said Yuma Mayor Doug Nicholls. “While the decision-makers in Washington let border communities fend for themselves, Governor Ducey has been by our side offering solutions since day one. ”

“Yuma is a small town, we’re not built to sustain the amount of people traversing our community,” Mellon said. “On our farm, we’ve seen the increase in migrants crossing. It’s not safe for our workers or for the migrants. I’m grateful for Governor Ducey’s leadership in taking action to secure the border.”

The Yuma sector saw a 1,200 percent increase in encounters in Fiscal Year 2021 compared to the year before. Yuma County Supervisor Jonathan Lines said this is a problem Governor Ducey had a solution for.

“The Yuma Border Barrier is working,” he said. “We’ve seen less and less people attempting to cross. The containers have helped regain operational control of our nation’s southern border. Governor Ducey’s strategy has allowed law enforcement to concentrate resources and protect our communities.”

On August 12, Governor Ducey issued an executive order authorizing the Arizona Department of Military Affairs to initiate operations to erect a barrier to close the gaps in the Southern Border wall. The Yuma Border Barrier was completed August 23 and consists of 130 double-stacked shipping containers which are reinforced with 4 feet of razor wire at the top. The shipping containers are 9 by 40 feet and weigh 8,800 pounds. The containers will be linked together and have been welded shut. In total, the border barrier stands 22 feet tall.

Governor Ducey signed on June 30, 2022 the most meaningful border security legislation in Arizona history, a plan to make record investments in protecting the state from the unprecedented crisis confronting our communities and law enforcement. The fiscal year 2023 budget, dedicates a record $564 million to help secure our border with a physical barrier, address critical public safety staffing shortages, and modernize the technology and public safety equipment to target criminal activity and keep our citizens safe.

On May 11, 2022, the governor called on the leaders of social media companies to step up and take action to protect youth from cartel recruiting messages luring them into transnational human smuggling activity.

On April 19, 2022, Governor Ducey and 25 other governors launched the American Governors’ Border Strike Force, a partnership to do what the federal government won’t: secure the southern border. Governors Ducey and Abbott joined Martha MacCallum on Fox News to talk about the initiative that same day.

On April 1, 2022, Governor Ducey called on the Biden administration to maintainTitle 42 to protect public health and safety.

in his January State of the State address, Governor Ducey proposed the idea for the American Governors’ Border Strike Force. He said, “Texas Governor Greg Abbott and I are teaming up to form the American Governors’ Border Strike Force – a commitment between states to do what the Biden administration is unwilling to do: Patrol and secure our border.”

On December 7, 2021, the governor surged and repositioned Arizona’s public safety resources to address the Biden Border Crisis in Yuma, Arizona.

On October 6, 2021, Governor Ducey joined Governor Abbott and eight other governors in Mission, Texas, for a border security briefing and press conference, where they detailed a ten-point plan for the Biden administration to resolve the border crisis.

On September 20, 2021, Governor Ducey and 25 fellow governors requested an urgent meeting with President Biden to find meaningful solutions to the border crisis. Their hope was to meet with the president and his team directly to discuss actions the administration can take. Secretary Mayorkas responded two months later on November 24, but has not taken meaningful actions.

On June 10, 2021, Governor Ducey and Governor Abbott sent a letter to all US governors asking them to send available law enforcement resources to the border.

On May 11, 2021, Governor Ducey joined 19 fellow governors to call on President Biden and Vice President Harris to reverse their destructive border policies.

On April 20, 2021, Governor Ducey issued a Declaration of Emergency and deployed the Arizona National Guard to the state’s southern border to support local law enforcement efforts.