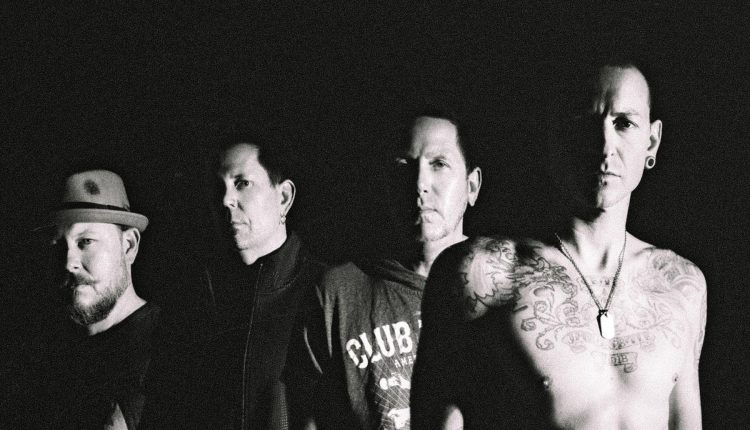 When Chester Bennington passed away back in 2017, the rock and metal world was left in shock and mourning, a man who so often gave his time and compassion to everyone be they a fan or a fellow struggler had lost his battle with mental health and had made the agonizingly sad decision to end his life. Chester was a great human by all attestations first and foremost, but he was also a formidable vocalist with his distinctively rich tenor cleans melding perfectly with his vulnerable and expressive screams to create the voice of a generation – one who desperately crave to hear his voice again. thanks to Chester‘s first band Gray Dazethose who feel such a way like myself can hear him once more, with a set of 10 tracks that the band recorded together with Chester upon the reunion of the band shortly before his untimely death.

I’ll get the elephant in the room out of the way right off the bat, Chester’s vocals are, predictably, outstanding. In fact, arguably they’re better here than they ever were in Linkin Park – and I mean that wholeheartedly. There are some lower tones to his voice here I hardly remember hearing from him before, there’s all of that emotion that you’d expect from his voice and yet it feels more measured and meaningfully deployed than ever before and most of all it feels like he really did want to do the compositions justice with a spellbinding vocal effort. but”ThePhoenix” isn’t just about Chesteras much as the title may indicate it is, this isn’t “The Chester Bennington Band” the songs in this album succeed in their own right and are glorified and actualized by the presence of adept musicians through and through.

Upon starting the album, we have a brief spoken word field recording of Chester joking around and being himself, before we’re greeted with an anthemic and grungy guitar that drones over his inimitable vocals. “Saturation (Strange Love)” is a really great song; it’s got a catchy and liberating chorus and a competent grasp of loud-soft dynamics that give the impression of a very professional and tight affair. There’s certainly a feeling of reliance that pervades the entire track, it’s a rousing and thoughtful affair and borrows more than a little than some of the better parts of Linkin Park’s admittedly somewhat spotty later discography.

As glad as I am that the first track sets the tone so well, I am also very happy to report that “Starting to Fly,” the second track of the album is also a veritable classic, with its well-produced percussion and very palatable sonic evolution throughout. At points, the main guitar takes a backseat and the percussion, vocals and bass are left to carry the song in a flash of vulnerability, before the themes of resilience and escape come back in on the rest of the track. It’s far from a revolutionary idea, but it’s an effective one that’s handled admirably and pleasingly.

There’s a pleasant blend of genre influences here for an alt-rock record, there’s a large abundance of post-grunge sensibilities (elitists look away in disgust) which combine well with some obvious nu metal elements and are all tied together by some good old fashioned hard rock. It means that a lot of this record could enjoy a fair amount of radio play – which is no bad thing here at all because simultaneously it possesses more than enough edge and grit to be a compelling listen to most fans of rock and metal alike. It also manages to avoid feeling derivative for the most part – sure you can hear bands that were influences, but they’re just that, they inform the writing, they’re not traced exactly as they are.

Track number three is “Be Your Man” and it’s a slightly slower, more restrained affair, replete with some of the lower vocals I mentioned earlier in the review. They sound great, they’re very soulful and they end a deeper depth to the composition than is perhaps present elsewhere in the album. It’s a small shame that the lyrics here don’t quite standout as much as the ones in the songs previous but they’re not exactly bad; they’re just ever so slightly bland. The track is a welcome change of pace to proceedings and fulfills the brief it likely was created to fulfill.

Next up is “Holding You” which is a funky and modern song that makes use of an ever so slightly jaunty guitar line and a spiraling chorus that creates images of cruising on a summer evening and of time spent with those who matter to you. It’s another solid track and it makes use of Dave Navarro of Red Hot Chilli Peppers Fame’s phenomenal guitar playing for a delectable and intriguing guitar solo that doesn’t feel thrown in or wasted like so many guest appearances can.

It’s so refreshing to see that this album has more substance than just having Chester in it. It’s easy to be cynical and to see the album as a cash in, but that would be extremely ignorant. I feel as if I must highlight that “Phoenix” and its precursors “Amends” both have the blessing of his family and that the band were all his friends who likely mourn him as much as anyone else. It’s also worth noting that the band made these songs before his death as a collective endeavor, the plan was always to relaunch the band and release some music and this is the ultimate way to honor that intention.

As we reach the half way mark of the album, we have a slightly ominous track in “Hole” featuring an opening that consists of Chester’s daughters singing the opening refrain of the track. There’s an anger and a bitterness in this particular song that feels more resigned and hopeless than the optimistic tone of the other songs that came before it. It’s a little bit softer and grungier too which manifests itself in a very restrained and gritty tone throughout that avoids run along riffs or guitar flares for the most part.

We’re met with an eastern inspired intro in track number six, “Drag” which is instantly captivating as a result of it. It layers up quickly and with a focused intensity into a spellbinding and intoxicating song about addiction and moving past it. The lyrics here are simple but are by far some of the best on the album, linking back up with themes of healing and resilience and lifting the mood of the album up from it’s rather doom soaked low of “Hole” and creating a sense of thematic whiplash that does as much to prevent the album from becoming stale as it does to embolden and underline the overarching themes of the album. It’s so important for an album to be thematically cohesive even when it isn’t a concept album, and Gray Daze have clearly understood that.

The variety in “ThePhoenix” is no small part of what makes the album so enjoyable, it’s very easy to become formulaic with your songwriting in genres such as alt-rock, where often listening can be somewhat passive due to an overly conservative adversion to changing up ones sound, but Gray Daze have skillfully avoided this by creating a solid center of their sound that is modular and malleable, and can be connected to various flairs and approaches without sounding trite or convoluted.

Track number seven is a low key affair to begin with, reminiscent of a mood pop song more than an outright rock track before layering up into a more grandiose piece of rock, with an expected but still welcome anthemic chorus that adorns nearly all songs on the album. The calm and tranquil opening re-frames the effect of this somewhat here, instead of being rousing, the chorus is actually relaxing and mellow in the light of the context that precedes it and it just goes further to show the diversity of the album. “Believe Me” is a highlight among many other glittering songs.

This is diametrically opposed to track eight, “Anything, Anything” which is bombastic and punky banger of a song that’s intense from start to end. Of particular note here is the syncopated and almostidiously accurate percussion that is absolutely perfect for the track, and all of the instruments seem to benefit from what is being done with it. It’s a simple track and it just works really, there’s very little to write about in regards to it because it just works on such a simple level that to attempt to would be over-complicating its appeal.

Considering the album only has a runtime of around 38 and a half minutes, it feels longer – not in a bad way, but the tracks often feel very epic and drawn out, with lots of changeability with them contributing to this in no small part. It’s always a pleasant thing when a band keeps a record tight and prevents it from becoming bloated in full of filler yet doesn’t leave you wanting too much more or feeling unfulfilled.

The home stretch of “ThePhoenix” is introduced by “Spin” with its synth accentuated flairs and its mellow vibe. It’s probably the worst track on the album, I don’t particularly care for the vocal approach on it, nor do I feel captivated by the way in which the song evolves, it feels surprisingly half-baked for a song on such a well- developed album. It is worth noting however that it took nine songs before any of them were disappointing. It’s not the worst song by any means at all, but I can guarantee you any time I come back to listen to the album (which I most certainly will) I will simply be skipping it every time because it doesn’t contribute anything to the experience as a whole, even with a tidy little guitar solo thrown into it towards the end of the song.

So now we arrive at the final track, “Wake Me” which returns to a more highly strung vibe and I am happy to report is one of the best tracks on the album. It’s exhilarating, it’s cohesive, there’s a sense of tension that comes to feel resolved towards the end of the track. It perhaps could do with being a bit more typical for the album as it’s really rather grungy, and a little out of touch with the rest of what is here, but it still does justice to the album and feels appropriately conclusive and well-measured.

What exists in “ThePhoenix” is a moving, transformative and varied album that would be an asset to any band’s repertoire, but more importantly, honors and glorifies the memory of the late Chester Bennington in a touching and thoughtful way. Chester is the final piece in the puzzle of the album, and in many ways, it’s the final piece in the puzzle of Chester. It does my soul good to know that this album will exist forevermore as a testament to him along with all of his others, and the band should feel extremely proud that they’ve delivered it in such a good way.

fly high Chesterfor your voice rests in the hearts of so many and echoes in the spirit of your music evermore.

“The Phoenix” is an exciting and spellbinding effort that honors Chester’s memory and shows the talent of his former band-mates in a display of varied, intriguing and colorful alt-rock that is sure to touch the hearts and minds of all who listen to it.