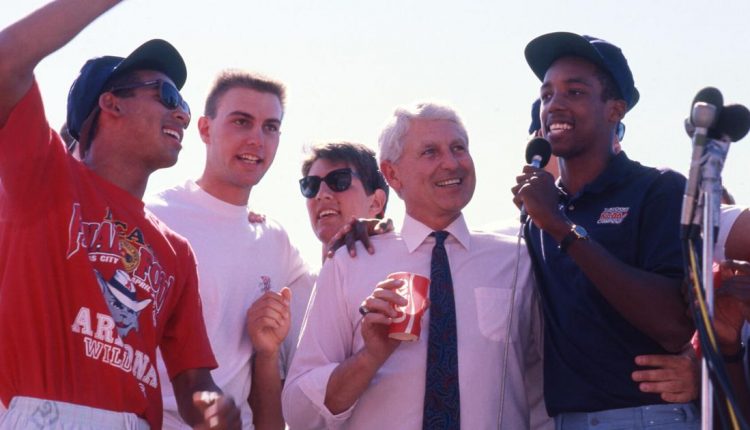 Greg Hansen counts down the top teams in Tucson sports history, from 100 to 1. Here’s the full list. | subscribers

In 1989, an “aerodynamic” Sean Elliott became the Pac-10’s all-time leading scorer during the Wildcats’ 38-point win over UCLA at McKale Center.


Tipoff for the Feb. 18, 1989 UCLA-Arizona game at McKale Center was pushed back to 4 pm to satisfy CBS’s Saturday schedule, giving Sean Elliott time to get a haircut.

By the time Elliott walked onto the court in mid-afternoon, he had a new look: a shaved head. Upon first sight of their new-look superstar, the raucous McKale Center crowd gave Elliott the first of what seemed like endless standing ovations.

“It should make me more aerodynamic,” Elliott said with a laugh.

Elliott wasn’t just aerodynamic that afternoon, he was in orbit. He scored 35 points in a 102-64 victory over the Bruins, then the worst loss in UCLA history. Elliott’s free throw with 7:10 remaining — his 35th point — made him the Pac-10’s career leading scorer, passing UCLA’s Kareem Abdul-Jabbar.

I walked into the UCLA dressing room a few minutes after the game and Bruins coach Jim Harrick — an old friend since his coaching days at my alma mater, Utah State — pulled me aside and shook his head.

“How many guys have you ever seen better than he is?” Harrick asked. “Really? How many?”

Tucson had never experienced anything like the Sean Elliott Story. Raised by a single mother, Odiemae Elliott, a nurse, Elliott emerged as a basketball standout at Cholla High School in the mid-1980s, although few noticed outside Tucson.

Elliott chose Arizona over UTEP, which was a remarkable bit of timing for UA coach Lute Olson, who moved to Tucson when Elliott was completing his sophomore year at Cholla.

After Elliott’s 35-point outburst against UCLA, Olson said: “Sean is the best big-game player I’ve ever seen or coached.”

In early November, the Wildcats lost 79-72 to No. 10 North Carolina in a made-for-TV game in Charlotte. They returned to Tucson and whipped No. 9 UNLV as Elliott scored 35 points and gathered 15 rebounds.

In early February, the top-ranked Wildcats played at No. 5 Oklahoma, the team that had ended their national championship hopes 10 months earlier at the Final Four. OU won in a dramatic 82-80 finish as Elliott scored 26.

The month ended with a made-for-TV game in East Rutherford. New Jersey. Elliott all but clinched national player of the year honors with a game-clinching 3-pointer and the Wildcats beat No. 9 dukes, 77-75.

On Selection Sunday, Arizona earned a No. 1 seed and was also ranked No. 1 in the AP poll.

Its route to a second consecutive Final Four looked clear. After routing Clemson to reach the Sweet 16, the Wildcats were sent to McNichols Arena in Denver for a rematch with Jerry Tarkanian’s UNLV Rebels.

UNLV had been the West’s leading basketball power in the 1980s, going 165-23 in the previous five seasons and reaching the 1987 Final Four. And although the ’89 Rebels had considerable talent with guards Greg Anthony, Anderson Hunt and defensive stopper Stacey Augmon, most thought UNLV was a year away from another Final Four.

But in the Sweet 16 in Denver, neither the Rebels nor the Wildcats flinched. An Elliott jumper over Augmon gave Arizona a 67-65 lead in the final minute. But everything changed when Arizona was called for a traveling violation with 29 seconds remaining.

After working the clock to the final five seconds, Hunt positioned himself to shoot a 3-pointer over Arizona guard Kenny Lofton, the UA’s top defensive player. What happened next will be debated forever.

Hunt appeared to push off, giving Lofton a forearm to clear space for a shot.

Lofton fell to the court. There was no whistle from an official.

Olson described his team’s loss as “bitter.” Elliott embraced his mother, Odiemae, in a corridor outside the UA locker room and wept on her shoulder.

The Wildcats finished 29-4, gone too soon, a loss that took years to process.