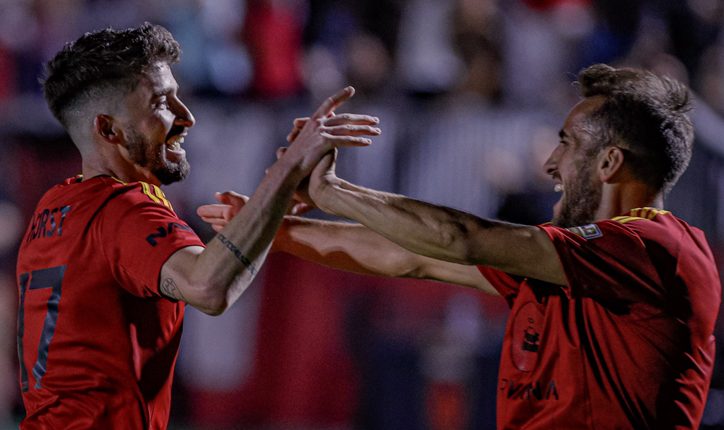 Greg Hurst (left) of Phoenix Rising FC celebrates after scoring a goal in the 81st minute against New Mexico United in the Third Round of the 2022 US Open Cup. Photo: Eryn Nicholson | Phoenix Rising FC

On a warm night in Chandler, Ariz., Phoenix Rising hosted New Mexico United in the Third Round of the 2022 Lamar Hunt US Open Cup. Phoenix would win the game by a score of 2-1. The one-goal victory is the second such winning margin in five days; the teams having met the previous Saturday in a USL Championship contest.

After an unfortunate deflection in the opening minutes Phoenix gave the lead on an own goal, New Mexico answered in the second half with an equalizer from Nico Brett in the 65th minute.

But the hero for the home team would be Greg Hurst who headed home the go-ahead goal in the 81st minute. It avenged a 2019 Open Cup meeting between the clubs that saw United prevail in penalty kicks.

The game started with the home side in control, pinning New Mexico back in defense. After not quite two minutes completed, the referee would have words with Phoenix’s Jason Farrell and New Mexico’s Chris Wehan after a testy exchange.

Just three minutes later, Phoenix’s Joseph Calistri sent a ball across the penalty area, which was deflected by William Seymore, which fell between the outstretched arm of GK Ford Parker and the crossbar to put the home side in front. Joseph Calistri and Roderick Epps would spend the first half troubling the New Mexico back line.

New Mexico could not find second gear for the first 17 minutes. The visitors would continue to grow confident, forcing Phoenix netminder Ben Lundt into more and more activity. The New Mexico captain Sam Hamilton would go off in the 31st due to injury. His replacement, Obiarrah Preston Tabortetaka, would make an immediate impact by driving into the Phoenix goal area in his first possession. He, Illia Ilic and Neco Brett would become a thorn for the Phoenix defense.

In spite of the one-sided beginning, both sides would amass six shots with one on goal in the first half.

The second half began with New Mexico applying the pressure from the whistle. Both sides moved the ball well and created good chances. The second round extra time hero for Phoenix, Claudio Repetto, would find himself in consistently good positions, but adjudged to be offside several times. Roderick Epps would continue to trouble New Mexico with several good chances, but no goal to show for it.

In the 65th minute, Harry Swartz would, from inside his own half, send a 45-yard pass to a streaking Neco Brett. Bretty coolly split two defenders and slotted it with his left foot to level the score. It was the culmination of a good spell of possession and creativity for the visitors.

Both teams again would trade opportunities and possession for several minutes. Finally, in the 81st minute, a team goal would begin from a goal kick. The 8-pass sequence that involved 7 players, culminating in a headed goal by Greg Hurst, from a Santi Moar header to put the Rising in front for good. New Mexico’s GK, Ben Lundt seemed to think the shot was going wide and was frozen to the spot as the ball gently glanced off the inside of the post. It is Hurst’s second game-winning goal against New Mexico in as many games.

Both teams continued to press for another goal, but no more were to be had.

The Phoenix Rising advance to the round of 32, the draw for which will be held April 21st at noon ET.

Developer studying the potential for wind farm near Tucson