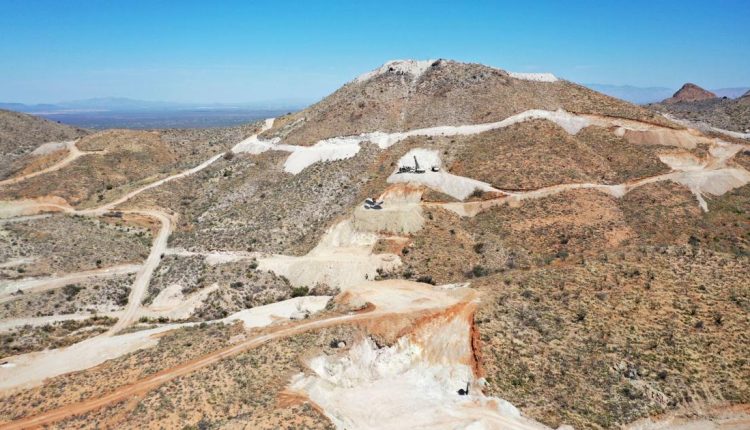 A Tucson congressman who chairs a key House committee told federal officials that Hudbay Minerals Inc. is illegally clearing and grading washes in the Santa Rita Mountains for a big new mine project and causing “irreparable harm.”

“Unpermitted environmental degradation” is damaging washes legally protected by the federal Clean Water Act, US Rep. Raúl Grijalva wrote on May 24 to top officials in the Assistant Secretary of the Army’s Office. They oversee the Army Corps of Engineers, which is responsible for enforcing that law.

Grijalva’s letter calls for the Army Corps to consult with three tribes opposed to Hudbay’s Copper World project, and to consider halting the company’s work there in the meantime.

“I am writing to bring to your attention the alarming reports of unlawful actions in Southern Arizona by Hudbay Minerals, Inc.,” said Grijalva, a Tucson Democrat who chairs the House Natural Resources Committee.

Grijalva also said lands of cultural importance to the tribes have been damaged by Hudbay’s work.

In response, Hudbay told the Arizona Daily Star there’s never been a formal determination by the federal government that the washes at Copper World are to be regulated under the Clean Water Act.

The company also said a federal judge’s ruling, issued the day before Grijalva sent his letter, rejected his key assertions. US District Judge James Soto in Tucson declined to halt Hudbay’s grading in response to lawsuits filed by the three tribes and by several environmental groups.

Hudbay originally did have a Clean Water Act permit, received in 2019, to build the proposed Rosemont Mine, just over the ridgeline from Copper World. But the company announced in May it was giving up the permit. That came after the Army Corps previously suspended the permit due to a 2019 court ruling by Soto that stopped the Rosemont work.

The Rosemont permit had also covered a utility corridor running from the Sahuarita area to the Santa Ritas that the Copper World project would also make use of.

The company pointed out that in Soto’s May 23 ruling this year, the judge accepted Hudbay’s action of relinquishing the Clean Water Act permit, also known as a 404 permit.

Also at issue is whether the Rosemont and Copper World projects are connected.

Soto accepted the company’s view — disputed by mine opponents — that the projects are separate. That meant the Copper World project didn’t need additional analyzes under environmental and historic preservation laws that would be related to previous analyzes made of the Rosemont Mine by the Army Corps, the judge ruled.

Said Hudbay in a written statement: “Chairman Grijalva clearly wrote this letter prior to Judge Soto’s decision on May 23rd. …Specifically, Judge Soto determined that the Rosemont and Copper World projects are not ‘connected actions,’ that the Corps is not required to consult with the tribes with respect to our current work on Copper World, and that it is ‘illogical’ to argue that we can’t surrender the 404 Permit.”

“Hudbay has not impacted any Native American archeological features and will not do so without first reaching out to the relevant tribe or tribes. We also surveyed the area for threatened and endangered plants and animals and are avoiding or relocating them prior to ground disturbance,” the company said.

The Copper World project would eventually include five open pits on the Santa Ritas’ west slope, which faces Sahuarita and Green Valley south of Tucson.

The long-stalled Rosemont Mine by the same company would be built on the mountain range’s east slope, facing the Sonoita area.

But unlike at Rosemont, which needed sign-offs from three federal agencies because it would make use of federal land, Copper World will be built entirely on private land. So it will need no federal approvals unless it’s determined the project needs a Clean Water Act permit for construction — an issue that’s not even close to being resolved.

Grijalva sent his letter to Mike Connor, assistant secretary of the Army for civil works, and two of Connor’s deputies.

Responding to a question from the Star, Grijalva didn’t say whether he was aware of Soto’s ruling when he wrote the letter.

Instead, he said, “Neither the court decision nor Hudbay’s assurances change my contention that the company can’t simply vacate their permit and then do as they please.

“Several weeks ago, Hudbay initiated groundbreaking activities for its vastly expanded Rosemont mine proposal, even though the US Army Corps of Engineers suspended the company’s Clean Water Act Section 404 Permit pending further review and analysis,” Grijalva said, arguing that Copper World is connected to Rosemont.

“Aerial photos document bulldozers filling the network of ephemeral streams on the site, impermissibly cutting off upstream waters of the United States protected by the Section 404 Permit,” he wrote.

Waters of the US are a technical term for any watercourses the federal government decides are worthy of regulation under the Clean Water Act if development is proposed.

“The company agreed that there are waters of the United States flowing across the Copper World area; it cannot cut off those jurisdictional waters by hastily grading and filling reaches downstream,” Grijalva wrote.

In his response to Grijalva, Hudbay told the Star, “The Army Corps of Engineers has never determined that there are jurisdictional ‘Waters of the US’ in the area and Hudbay has independently concluded through its own scientific analysis that there are none.”

The longstanding effort by Rosemont Copper, Hudbay’s Arizona subsidiary, to obtain a Clean Water Act permit for Rosemont was based on the company voluntarily consenting to the Corps’ jurisdiction without an actual determination, Hudbay said.

Stu Gillespie, an attorney for the three tribes, said Hudbay has “studiously avoided” seeking an Army Corps determination of whether it had jurisdiction over Copper World washes. Now, it tries to use that as a basis for claiming that no such determination has been made, he said — “that’s entirely circular.”

Grijalva wrote that Hudbay’s work is “also degrading a traditional cultural landscape of deep significance to the Tohono O’odham Nation, Pascua Yaqui Tribe and Hopi Tribe, among other indigenous communities.”

The Army Corps needs to consult with Native American tribes to insure that any decision it makes regarding the Clean Water Act permit for Rosemont avoids or minimizes impacts on tribal cultural resources, Grijalva said. While that review occurs, the Corps should “consider taking immediate action to cease Hudbay’s destruction of waters of the United States and traditional cultural properties.”

The Santa Rita Mountains are a traditional cultural property under the National Historic Preservation Act, said Gillespie, the tribal attorney. Hudbay’s clearing and bulldozing that land “is causing irreversible harm to a tribal cultural property,” he said.

A federal paper that recommended designating the Santa Ritas as a traditional cultural property said the Tohono O’odham historically inhabited much of what is now Central and Southern Arizona.

For that tribe, the Santa Ritas contain “a landscape imbued with cultural significance, a location of sacred sites, ancestral villages and ancestral remains, and a source of plant, animal, and mineral resources critical in maintaining traditional O’odham culture,” the nomination paper said.

The Santa Rita Mountains are also considered of traditional cultural importance by other Native American groups, the nomination paper said.

For months, the Army Corps has been asked by tribes and environmental groups to stop Hudbay from doing work on the Copper World site without a Clean Water Act permit. But the agency had no public response and had opposed the critics’ now-rejected lawsuit, which was filed on grounds unrelated to the Clean Water Act.

The Star asked the Corps last week if it had concluded whether Hudbay’s grading was violating the Clean Water Act. In an April federal court hearing, a Justice Department attorney said the agency was investigating that question but it would take time to complete such work.

Late Friday, the agency’s Los Angeles District responded in a statement, “The Corps is considering and gathering information concerning reports of construction activities at the Copper World project area and coordinating with (the Environmental Protection Agency) to determine what, if any, action is necessary.”

Asked also about Hudbay’s surrendering its 2019 Clean Water Act permit, the Corps said it has no legal process to surrender permits but permit-holders can ask the Corps to consider revoking one. It noted it told Soto on May 4 that’s how it’s treating Hudbay’s action.

Soto’s ruling, while calling the lawsuit against the grading “moot” because of Hudbay’s surrender of the permit, didn’t revoke the permit and the Corps “is continuing its revocation review process,” the agency’s LA office told the Star.

“Before revoking a permit, the Corps will consider whether it’s in the public interest and evaluate a number of factors,” the agency said.

Grijalva’s letter comes as two court rulings are at play regarding the Rosemont and Copper World projects.

On May 12, 11 days before Soto’s Copper World ruling, the US 9th Circuit Court of Appeals upheld a 2019 ruling by Soto that has since blocked construction of the Rosemont Mine on the Santa Ritas’ east slope. Both courts concluded that the US Forest Service exceeded its legal authority by approving that mine’s use of federal land for dumping its waste rock and tailings.

The mining company hasn’t said whether it will appeal the 9th Circuit ruling to the US Supreme Court. Attorneys for the tribes and environmental groups who unsuccessfully sought to block the Copper World grading also haven’t said whether they’ll appeal Soto’s latest ruling or file a citizens lawsuit arguing Hudbay’s discharges of fill material into Copper World-area washes violate the Clean Water Act.

On Thursday, an official in the Army’s Civil Works Office told the Star its staff is preparing a response to Grijalva’s letter.

“We’re drafting a response as we speak,” said Col. Steven Sattinger, an executive officer in the Assistant Secretary’s Office. “It will go to the congressman, not the media.”

“We received the letter on May 25, and 15 days is a typical response time. That is when I expect Mr. Connor will be presented with the staff work on the letter,” Sattinger said. “How long he takes depends on his familiarity with the issue and the complexity of the response.”

Stranger Things Takes a Page From an Iconic X-Men Scene