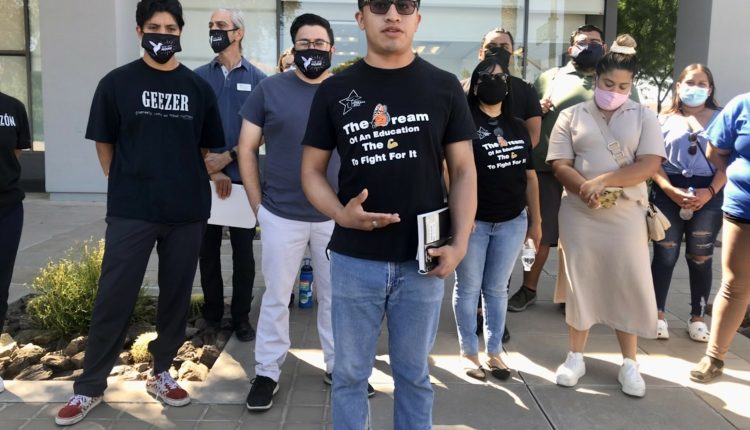 Immigration community advocates are pushing U.S. Sen. Mark Kelly to find “whatever means” to pass a pathway to citizenship for undocumented immigrants following a setback on Sunday when the policy change to secure a permanent immigration status for millions was blocked from being part of the budget reconciliation process.

On Sunday, the U.S. Senate parliamentarian — who is a nonpartisan advisor on the Senate rules and process — turned down the plan Senate Democrats included in a $3.5 trillion reconciliation package to provide the Senate Judiciary Committee with $107 billion for “lawful permanent status for qualified immigrants.”

Gathered near Kelly’s office in central Phoenix on Monday, members of the We Are Home coalition said the Senate parliamentarian, Elizabeth MacDonough, does not “have the last say” on providing permanence to some undocumented immigrants.

“She should not be the decision-maker… Our leadership in the Senate, in the White House, are the decision-makers to provide a pathway to citizenship for our people, for our community” said Karina Ruiz, leader of the Arizona Dream Act Coalition. Ruiz has temporary protection from deportation and a two-year renewable work permit through the Deferred Action for Childhood Arrivals program.

While the Senate proposal on budget reconciliation doesn’t specify which immigrants would be included, the House version would include DACA beneficiaries, farmworkers, essential workers and those with Temporary Protected Status.

Ruiz said many immigrant community leaders used their networks to help elect Kelly and Sinema, so they should raise their voices and leverage their power to get a pathway to citizenship past the finish line.

“Many of us have walked the streets of Arizona for these candidates to represent people like ourselves,” she said. “And now it’s time for them to do the right thing and not hide under this parliamentarian opinion but continue pushing until they deliver by whatever means.”

Karina Ruiz, leader of the Arizona Dream Act Coalition, speaks on Sept. 20, 2021, outside of Sen. Mark Kelly’s office in Phoenix to push the Democrat to commit to a pathway to citizenship for undocumented immigrant communities. Photo by Laura Gómez | Arizona Mirror

On Monday, Jordi Santos said he was one of those who canvassed to get support for Kelly and Sinema.

The North High School graduate went door-to-door in west Phoenix and met other families like his: undocumented, struggling, hopeful.

“The community has contributed and they did it because they believed they’d find help,” Santos said. “It’s time they do this for the undocumented community.”

Jesus Vazquez, who is eligible for DACA but has been blocked from benefiting from the program, said Kelly and Sinema should support the people that help them get elected.

“We are always left out,” he said. Vazquez added that instead of acting on the parliamentarian’s opinion, he wants the Arizona senators to hear the stories of the young immigrants who are impacted by the lack of meaningful Congressional action to give permanence to millions of immigrants and their families.

“This really does affect our lives in many ways,” he said.

In a statement to the Arizona Mirror, Kelly’s office said the first-term senator is committed to looking at all options when it comes to finding a pathway for citizenship for young immigrants brought to the country as children, often called dreamers.

“Senator Kelly continues to believe that Dreamers have been waiting far too long for certainty and a pathway to citizenship and remains committed to working in the Senate to find a path forward,” said Marisol Samayoa, spokesperson for Kelly, in an email.

“As a DACA recipient I’m tired of being a political talking point for many,” Reyna Montoya, founder of Aliento, said in a statement, “Once again, Democrats control the Senate, the House of Representatives & the White House. It is NOT enough to preach support for Dreamers. Our skin is at risk of deportation. We need policy change now!”

“The budget reconciliation process is the only vehicle available in this Congress to expand the legal labor market in times of critical labor shortages across all sectors, and to repair our economy as we battle the COVID pandemic,” said Rebecca Shir, ABIC executive director, in a statement. “We urge Congress to work around the Senate Parliamentarian’s ruling by developing an alternative to meet the urgent needs of our economy and families.”

Search For Man discovers the skull of another + less camelback drama