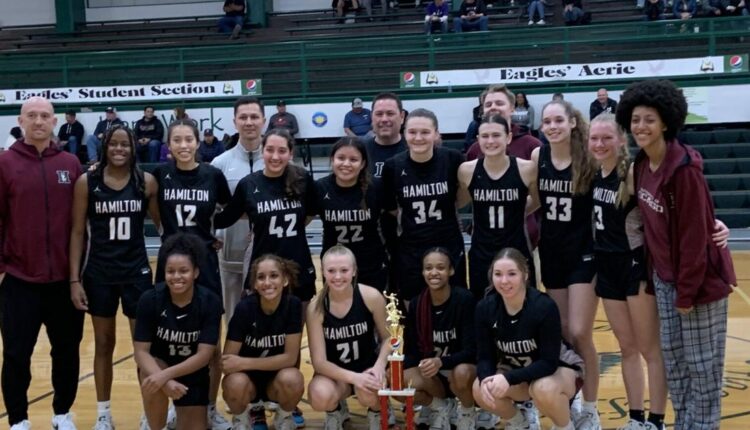 The Huskies finished the tournament undefeated and will head back into regular season play with positive momentum moving forward.

Juniors Ella Malee and Kayla Adams led the Huskies with 14 points. Fellow junior Savanna Creal finished with 13 points, returning to play and making a big defensive impact after taking a hard elbow to the face in the third quarter.

The win was the culmination of the three-day tournament at FHS’ War Memorial Gymnasium. Sunrise Mountain defeated Flagstaff 60-56 to earn its spot in the championship game, while Hamilton defeated the Winslow Bulldogs 54-34 in their semifinal game.

The tournament provided Hamilton the chance to work on their defense and offensive plays, plus experience playing at high elevation. Creal said the win also helps validate where they are as a team.

“I feel like [the win] helps us prove that we’re a good team, because a lot of the teams in our division are doubting us and thinking we’re not as good of a team as we are,” Creal said.

Both teams came out of the gate running at a breakneck pace. Hamilton junior Breanna Sommers was fouled and got to the free-throw line twice in the first minute, going 1-for-1 each trip.

Soon after, the Mustangs called their first timeout with 6:11 to go in the quarter, down 9-5.

Following the timeout, Sommers continued to find her way to the basket, finishing with seven points in the quarter.

Senior Mackenzie Nielsen was Sunrise Mountain’s hot hand in the opening quarter, connecting twice from 3-point range, but the Mustangs faced an 18-9 deficit going into the second.

Huskies head coach Trevor Neider said he was satisfied with how his team played, considering how many games they had under their belt over the past few days.

“We know everybody’s gassed and everybody’s tired, so we just said ‘let’s come out and run and go and just play with the energy and let’s out-hustle a little bit,’ ” Neider said. “And they’re a really good team, but they were tired too and we had a little more depth and that was huge for us.”

The first quarter was a physical one as much as it was fast paced, and that continued in the second. Early on in the quarter, Malee was passed the ball from near half-court and sliced ​​through the defense for a wide-open layup. It was one of several instances that the Mustang defense broke down.

Sunrise Mountain continued to struggle on both ends throughout the first minutes of the second quarter. Senior Mackenzie Dunham, who either led or was near the top in most of their statistical categories last season, was being neutralized. Dunham got her first points courtesy of two free throws in the quarter.

Mustangs head coach Jenn Tolle called a timeout down 29-14 with 4:42 left in the half, but Hamilton’s lead only continued to grow.

The Huskies stayed hot after the timeout, as Malee hit her first 3-pointer of the night and continued to find her way to the basket. Adams also had her best stretch of the game, finishing the quarter with eight points.

Dunham got back to the free-throw line almost immediately following the start of the second half and hit both shots. Soon after, Creal hit the court hard after being elbowed in the face.

“I usually don’t get injured,” Creal said. “I don’t cry a lot, but when I get hit, I did cry. So when I went back in, I knew I had to keep going and keep persevering.”

Hamilton’s offense cooled down in the first few minutes of the second half, but still held a substantial lead.

Once Creal came back into the game later in the quarter, she picked up where she left off, scoring, then getting a steal at the other end and finding the basket.

Sunrise Mountain continued to chip away at the deficit, but still trailed 54-25 at the end of the third quarter.

The Mustangs had their best offensive quarterback of the game in the fourth, but Hamilton had all but put the game away.

“I think [the win] gives us a lot of confidence,” Neider said. I mean, we had some, we’re thinking we’re good, but this kind of shows we’re pretty good, because there’s a lot of really good teams here. I think just being able to play with them and play well, give us confidence. Hopefully we can build on it and believe in ourselves a little bit.”

Nielsen and Dunham were named to the all-tournament team following the game, while Malee, Creal and Sommers were the Huskies’ representatives. Flagstaff’s Jazmine Dugi was also named to the team.