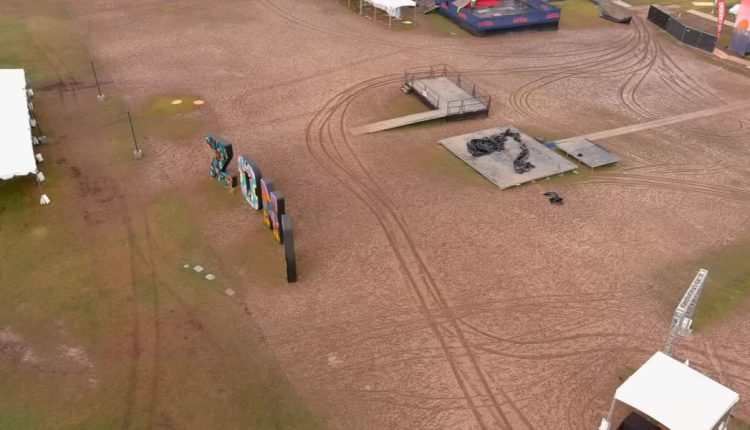 PHOENIX (3TV/CBS 5) – Hance Park was left in ruins after thousands of music festival-goers trampled through it on an unexpectedly rainy Saturday. The festival was a big hit, but the entire park is now just a pit of mud. Now the city has some work to do before hosting more events for the Super Bowl.

This weekend marked the first-ever Zona Music Festival. With thousands of guests and a day full of rain, one strip of green is nearly all left of a muddy, messy Hance Park.

“Obviously, the weather decided to show up one time in the desert,” Jason Euler said. Euler works for Psyko Steve, a company that has been producing concerts for over 20 years. He helped bring the first of its kind ‘Zona Fest’ to Phoenix. “In events you can plan for absolutely everything. You plan for all the last-minute stuff. All the things that go wrong. But mother nature’s going to do her think and that’s what we saw this weekend,” Euler said.

With the once-green park turning into a sludgy mess, crews were worried guests would leave. That wasn’t the case. “A couple of the performers I know, one over on stage two, specifically played a song about dancing and playing in the mud. People were losing themselves in the music,” said Euler. The mess, Euler says, may have made it more fun.

Lindsey Josey works in merchandise. She says the weather helped her sales. “It was cold, but I think that helped the merch sell a little bit. All those hoodies were flying,” said Josey.

But with the city gearing up to host the Super Bowl in February, with several significant events happening at Hance Park, the city provided this statement on the condition of the park:

“The Parks Department will perform the necessary maintenance to restore the turf and ensure the park is ready to host Super Bowl activities. If the Parks Department finds there is damage that was caused by the festival, the event producers would be responsible for any needed repairs.”

Besides the rain and mud, the first-ever festival was a huge hit with 39 musical acts, putting Phoenix on the indie music city map.