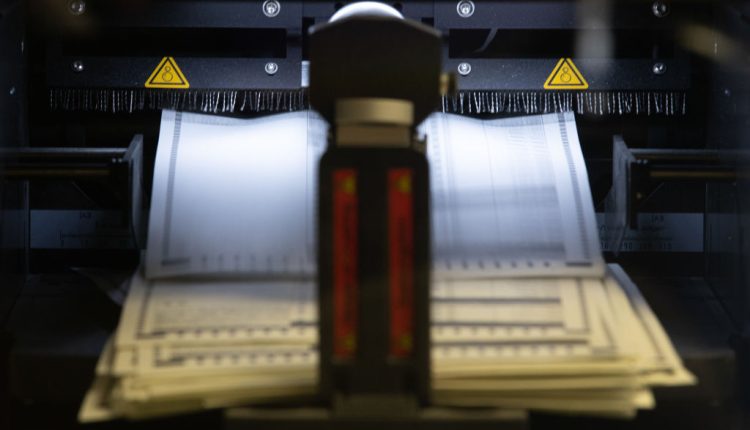 Supervisors in Cochise County said Tuesday they are intent on voting on a proposal to hand-count all ballots cast in November’s election, despite repeated warnings from their lawyer that the plan would be illegal.

Deputy Cochise County attorney Christine Roberts repeatedly told the supervisors that state law does not give them the authority to conduct a full hand count of ballots cast by the county’s 87,000 voters, and even if it did, it isn’t legal to change election procedures this close to an election.

She may be able to prevent them from moving forward. The county attorney’s office must approve items before they are placed on a supervisors meeting agenda, County Administrator Rich Karwaczka told Votebeat after the meeting.

“The county attorney would block something they believe is unlawful,” he said, adding that allowing a vote on an illegal proposal would increase the county’s liability and risk.

Supervisors Tom Crosby and Peggy Judd, both Republicans, want to continue using vote-counting machines this election, and to add a full hand count, as first reported by Votebeat. Together, they’re a majority on their three-person board. With Election Day only a few weeks away and early voting already under way, they didn’t offer details about how it would work or who would bear the costs.

After Roberts told Crosby and Judd their plan was illegal during a public work session Tuesday, Judd said she was going to obtain a “second opinion,” perhaps from Attorney General Mark Brnovich, and draft an agenda item for the supervisors to vote on at an emergency meeting anyway.

“I’m just so sure of it being possible,” Judd said. “It’s very hard for me to listen to our wonderful attorney there. It’s like, ‘Oh, quit telling us we can’t.’”

Before the supervisors’ work session Tuesday, Elections Director Lisa Marra, the public official who would be responsible for finding a way to execute the hand count of all ballots cast by the county’s 87,000 voters, told Votebeat she has major concerns with the proposal.

Among them: She estimated the proposed hand count would take about 2,500 hours to complete.

Marra was invited to attend the work session but did not. Afterward, she had no comment. “Rarely do words fail me, but here we are,” Marra said.

The Republican-leaning county is the latest to propose a hand count. The proposal has surfaced around the country, fueled by distrust of vote-counting machines since the 2020 election and fed by conspiracy theorists spreading unfounded claims that voting machines were programmed to switch votes in favor of Joe Biden.

There is no evidence that voting machines were hacked in 2020, all court cases alleging so have been dismissed, and federal agencies and experts have said that 2020 was the most secure election to date.

Under Arizona law, ballots should be tabulated with certified election equipment and “a hand count may only be used if tabulating with certified equipment becomes impracticable,” according to C. Murphy Hebert, a spokesperson for the secretary of state’s office.

A hand count could also potentially violate the state’s requirement that results not be provided publicly until after the polls close on Election Day, Hebert said. That’s because the plan is to recruit volunteers to start tallying votes cast immediately, weeks ahead of Election Day, and those volunteers would know partial results before polls close.

It’s also unclear where the county would get the time, money, or bipartisan staff to do the hand count – questions that, for the most part, Crosby and Judd did not address Tuesday.

Recorder David Stevens, who helps run elections in the county and has spoken in favor of the hand-count proposal, said, “There is always a cost to an election, it’s just where you want to spend the money.” He pointed out that the county’s vote-counting machines cost millions of dollars, implying that if hand-counting works, the county could get rid of the machines.

Before the meeting, Judd said residents had pushed for the hand count, prompting the work session, but that a hand count for the 2022 election was unlikely. In an email last month, she had encouraged residents’ efforts.

Nonetheless, she and Crosby pushed back hard against Roberts’ legal concerns during the work session, and Crosby said he wanted the proposal to do a hand count this year to be voted on at an emergency meeting on Thursday.

Karwaczka later told Votebeat the county attorney must decide if this qualifies as an emergency. The next regular board meeting is Oct. 25.

In another odd twist, the board allowed Sierra Vista resident Joseph Patterson to speak in favor of the proposal. Typically, no public comment is permitted at work sessions, and no other member of the public was allowed to speak. According to Judd, Patterson had requested that supervisors hold the work session.

Patterson told the board that he knew of 140 people willing to volunteer to count ballots.

English, the only Democrat on the board, allowed Patterson to debate the legality of the proposal with her and with Roberts, the county attorney.

“I appreciate the legal opinion,” Patterson said, adding, “I’m not an attorney, obviously.”

Nonetheless, he continued to assert the hand count would be legal. “In my research, I couldn’t find anything that is prohibitive of hand counts anywhere,” he said, adding, “It is not prohibited.”

In response, Roberts again said that the board does not have “express authority” to do a full hand-count.

“Your recourse is really not to this board of supervisors. It is to go to your state legislators and tell them what you want so they can build it into the statutes,” she told Patterson.

Judd hinted that might be the end goal anyway.

“If we are not successful, if we don’t get quite to that 100% hand count on Election Day — because it is only three and a half weeks away — we have gotten to the point that we are going to be a lot more influential in the Legislature,” Judd said. “We are going to say, ‘Look, we can do it. We need the laws changed.’ But if we don’t even try then we have not done anything.”

Jen Fifield is a reporter for Votebeat based in Arizona. Contact Jen at [email protected]