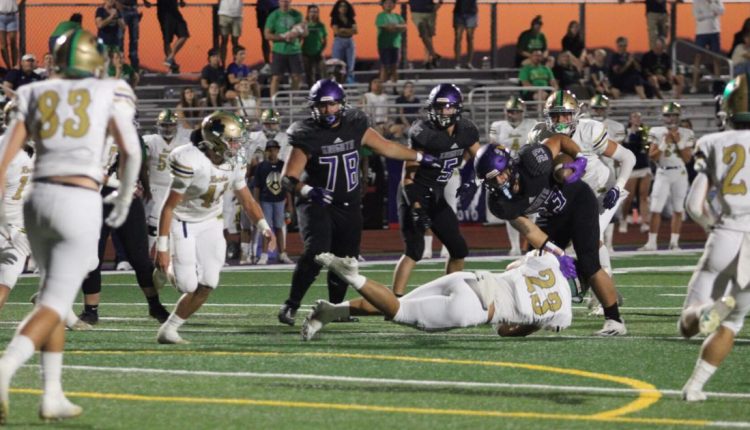 Despite winning the turnover battle, the Knights still lost 28-14 to the 4A conference leader, the Shamrocks.

The Knights had four total interceptions while the Shamrocks had one interception and one fumble recovery on the night.

The Shamrocks were able to contain senior running back Isaac Stopke better than any of the teams the Knights have faced thus far this season. And “containing” Stopke meant holding him to one 30-yard rushing TD rather than a handful of 50 to 70-yard rushing TDs.

The Knights didn’t let that keep them out of the game though. Quarterback Tyler Thompson showed composure and patience in the pocket all night and created more passing opportunities for his receivers.

Senior wide receiver and defensive back Glen Adona kicked the night off with a receiving TD in the first quarter.

The Yuma defense then held and forced Havasu to attempt a field goal early in the second quarter. The attempt was blocked and recovered by Yuma, keeping the score at 7-7.

Right before halftime, Yuma’s wide receiver Darryl Coleman caught a TD pass from Stallworth that put the Shamrocks in the lead 14-7.

After receiving the second half kickoff, Stopke took the ball home to tie the game 14-14.

But with more passing attempts comes a higher risk of interceptions.

Yuma intercepted a pass attempt by Thompson late in third, which eventually led to another receiving TD and brought Yuma up 21-14.

The turnover battle of a lifetime happened late in the third and continued into the fourth, which began and ended with Havasu wide receiver and defensive linemen James Douglas.

Douglas intercepted Stallworth and put Havasu at Yuma’s 16-yard line. But the following play was a fumble by Havasu that was recovered by Yuma. A few plays later, Douglas came down with a ball thrown by Stallworth yet again.

The back-and-forth resulted in a turnover on downs with Havasu under 20 yards from the endzone, but it didn’t end there.

The Shamrocks’ drive was cut short by yet another interception. This time, sophomore running back and linebacker Gavin Briggs came down with the ball around midfield.

But after a lengthy drive in the fourth quarter, the Shamrocks punched the ball in one more time to win the game 28-14.