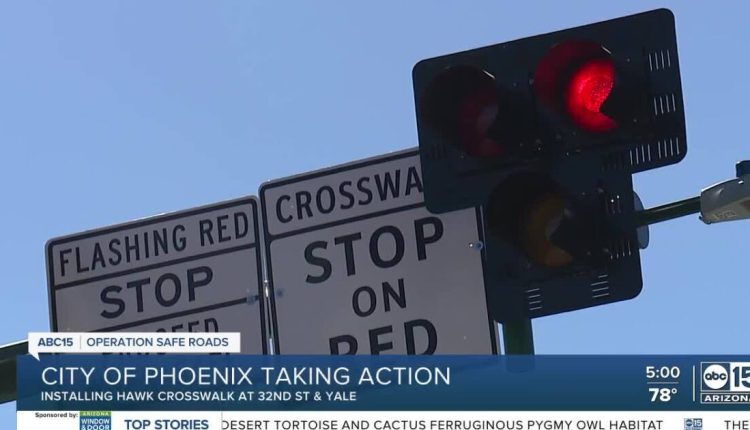 PHOENIX — The families of two pedestrians struck by a car and killed while crossing a busy Phoenix roadway are remembering their loved ones as the city makes safety changes to the intersection.

Back in April, Dorothy Dale-Chambers and Joseph Gutierrez were struck by a car and killed at 32nd and Yale streets in Phoenix.

Neighbors had been complaining for years that some sort of crossing light needed to be installed, as the traffic on 32nd Street moves extremely fast, leaving people very little time to cross the intersection safely.

The city listened and in September, the Street Transportation Department installed what’s called a HAWK signal at the intersection.

“It was a great idea because the traffic on 32nd St. is really heavy,” said Rebecca McClain, who gets around the neighborhood in a wheelchair.

According to the transportation department, HAWK stands for “High-Intensity Activated Cross Walk”

Unlike a regular red, yellow, green traffic signal, the department says a HAWK signal stays dark until a person needs to cross.

“It blinks on one side, or both sides, and then it goes to red and both sides are supposed to stop,” McClain said, pointing to the HAWK signal.

While some people can still be seen crossing dangerously in the middle of the intersection, for the most part, people say, the addition of the HAWK signal has made things much safer for the most vulnerable residents, including the homeless and disabled.

“The light is good right now for the children, for the old people, for the cars,” said Yannet Pilego, who lives in the area.

The family of Dorothy Dale-Chambers is still seeking justice.

A family spokesperson says the case involving the driver, who did stop at the scene, is still working his way through the court system as investigators are trying to determine how much of a role if any impairment played in the deaths.

The family planned a vigil and balloon launch this evening at Perry Park. They plan to walk to the intersection where the HAWK signal is now installed.

AZ Big Media Tucson ranks No. 1 among US cities that give the most goose bumps