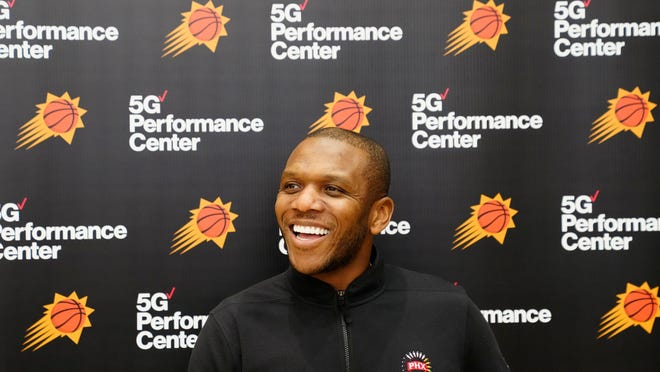 Jae Crowder hasn’t played in an NBA game since May 15 when Dallas took Phoenix apart in Game 7 of the Western Conference semifinals at Footprint Center.

The veteran forward and the Suns “mutually agreed” he wouldn’t attend training camp as they’ve been trying to trade him.

There’s a perception in some circles the longer Crowder is out, the harder it’ll be to move him.

“Jae is a good player and he’d help any team and teams know that,” Jones said.

Jones discussed Crowder and several more topics during a Tuesday media session at the team’s practice facility. In Part 2 of The Republic’s report, Jones also talks about Crowder’s situation and the play of Devin Booker, Deandre Ayton and Damion Lee.

Promoted to the team’s president of basketball operations this week, Jones discussed the challenges of trying to trade Crowder, as Suns coach Monty Williams hoped for deal to be done before the start of the regular season.

“It’s the NBA,” Jones said. “Timing. There aren’t any perfect times. There’s no window where they say, hey, all deals are done here. We have natural deadlines like the trade deadline where we usually have a flurry of deals, but other than that, it’s just finding the right fit and we just haven’t been able to find that yet.”

Crowder is due $10.1 million in this the final year of his three-year deal. The Suns are still paying him, but Williams said going into the season he liked his team whether a Crowder deal was done or not.

Jones has taken the team into account when searching for a deal that best suits the Suns (14-6), who had the best record in the Western Conference going into Wednesday’s game against Chicago.

“I always believe in teams,” Jones said. “At the end of the day, what we’re talking about is where we end up and where we finish, not where we start. There are a bunch of different paths you can take on that journey towards the end. So we’re just going to be patient and find the best path for it, but eventually something will get done and when it does, we’ll move on to the next challenge or the next decision that people will become anxious for us to make .”

Cam Johnson replaced Crowder in the starting lineup, but he’s recovering from a torn right meniscus that underwent a procedure Nov 8. Suffering the injury Nov 4 against Portland, Johnson is recovering at a solid pace as he looks to return within two months.

The Suns and Johnson were unable to agree on a rookie extension as sources informed The Republic the team offered him a four-year deal for $60 million. Johnson wants to be a restricted free agent in the summer, but Jones isn’t even looking that far down the road right now.

“We didn’t get a deal done,” Jones said. “We agreed he’s someone we love and value. So that’ll just be another conversation going forward. For right now, it’s getting him healthy so that he can return to form and play the way he was playing before he got injured.”

With Johnson and Paul out, Phoenix has had to dig deeper into a bench that has new additions in Damion Lee, Jock Landale, Josh Okogie and two-way player Duane Washington Jr.

All four have made contributions.

“If you track those guys and their history and just their paths to the NBA, you’ll realize they’ve displayed a tremendous amount of grit and resiliency just to get here” Jones said. “So you shouldn’t be surprised when they are in situations that require them to show fortitude and they show up and that’s their way of life. That’s who they are. They just really have a chance to reveal who they are in some very unique moments. I’m proud of those guys. If you look at our team, they totally embody what we’re about.”

Lee has made the biggest splash of the newcomers as he came into Wednesday’s game shooting an insane 22-of-36 from 3 in the fourth quarter.

“Just confidence, trying to be as consistent as possible,” said Lee after shooting 3-of-5 from 3 in the fourth quarter of Monday’s win at Sacramento. “I don’t look at the numbers, I don’t look at whatever it is. I just go out there and play the game. The game dictates what to do. My teammates find me. Just trying to find the right spot. So confidence is just translating.”

Lee leads the league in 3-point shooting percentage in the fourth at 61.1%.

“No one expected Damion to have these opportunities except Damion, which is why if you watch him every day, he puts in the work,” Jones said. “He grinds hard enough for these moments. So he’s unique in that sense in that he’s a guy who has been thrusted into this situation and he’s made the most of it and he hasn’t even flinched.”

While Phoenix has a deep team, it still starts with Booker.

Playing at an MVP level, Booker is averaging a career-high 27.9 points this season.

“When I came in, he was a really talented young player who was just dying to win,” Jones said. “Dying to contribute to any way possible to winning and now I see a young man who understands he’s the key to an extended run of winning. He’s able to do it from so many different ways. Rebounding the ball, defending, shooting, play making. Inside and on the post, midrange, from 3, off the dribble. He’s become a complete player.”

Jones continued by saying Booker has “upped his game” defensively and being a team leader.

“I think that’s why he’s rightfully in the conversation for MVP,” Jones said. “Without him, we’re nowhere near where we are today.”

Ayton has played a role in Phoenix’s successful start as well.

Earning Western Conference player of the week honors Monday for the first time in his career, Ayton posted a career-best sixth straight double-double at Sacramento.

“It’s a joy to watch him mature and grow and figure it out,” Jones said. “He understands who he is as a player and he’s starting to understand his value to our team and just in the league.”

Ayton admitted he’s put in more work in the weight room than ever before, a move that’s Jones sees paying dividends.

“It creates a performance baseline,” Jones said. “We all know you need reps. As many shots as you can get, that kind of sets the floor for you ability to shoot. Same thing from a physical perspective. The more you’re in the weight room, the more sessions you can get in. The more you can lift, you just raise your performance floor and it allows you to sustain it over 82 games, over 110 games, preseason and playoffs. He’s starting to get that.”