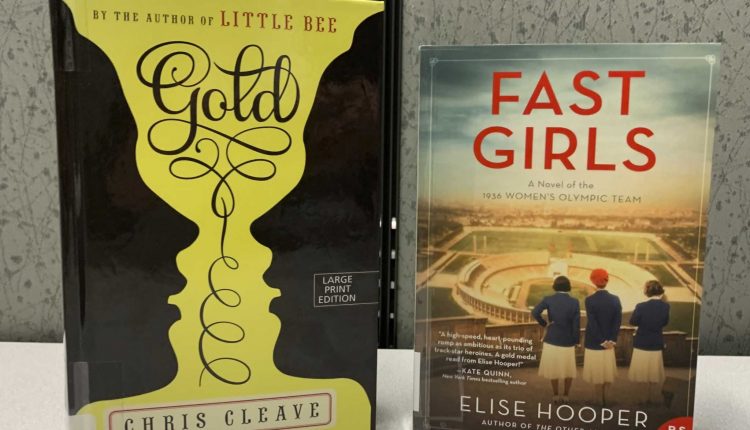 Here are some titles to indulge in stories from the Olympics

Inspired by ancient religious and sporting festivals that began from the 8th century BC. The Summer Olympics were first held in Athens, Greece in 1896.

Over the years there have been changes such as the addition of the Winter Olympics, Paralympic Games, Youth Olympic Games, and world sports for competitions not included in the Olympics. All over the world people ruthlessly train for their chance to compete and many others cheer them on.

Many books have been written about this international event and here is a selection of what the Manistee Coutny Library has on the subject.

• “The Games: a Global History of the Olympics” offers the epic story from Athens 1896 to Rio 2016. This volume records highlights and headlines, international conflicts and the impact of the Olympic Games on world history.

• “First Olympics: Blood, Honor and Glory” on DVD is a documentary film about the brutality of pankration, an ancient martial art that combines wrestling and boxing. Although the late 1930s was a struggle for the Japanese, a man gathered a group of children and trained them to overcome their circumstances. They learned to swim in irrigation ditches and broke American and world records. World War II would delay their search for Olympic gold, but in 1948 they had another chance.

• “Three-Year Swim Club: The Untold Story of the Sugar Ditch Kids and their Quest for Olympic Glory” by Julie Checkoway tells her story.

• “The Boys in the Boat: Nine Americans and Their Epic Quest for Gold in the 1936 Olympics” by Daniel James Brown follows a rowing team made up of working-class boys who competed against many elite teams. Her strength came from understanding what it means to be a team and willingness to fight against all odds.

• “Don’t Give Up, Don’t Give In: Lessons from an Extraordinary Life” was completed two days before the death of the author Louis Zamperini at the age of 97. In it he tells of his path from the restless youth to the Olympic runner to the survivor of the prisoner of war. After all that he had to endure, Zamperini found a new meaning in his life that he could share with others.

• “Chasing Water: Elegy of an Olympian” by Anthony Ervin is a biographical representation of the author’s journey as Olympic hope from devastating lows to astounding heights.

• “In the Water, They Can’t See You Cry: A Memoir,” by Amanda Beard and Rebecca Paley, tells of an Olympic athlete’s struggle with depression while she competed in four Olympic Games and had a successful modeling career.

• Fiction readers might like to read “Rat Catchers’ Olympics” by Colin Cotterill. This is the 12th title in the “Dr. Siri Paiboun ”series. In 1980, the People’s Democratic Republic of Laos sent its first athletes to Moscow to fight for Olympic gold. When one of the athletes is accused of murder, Paiboun must work with two suspicious governments to uncover the truth.

• Lois Greiman’s Hearth Stone begins with Sydney Wellesley recovering from an injury she was unable to keep up with the US equestrian team. Living on a ranch inspires her to start a company that trains Olympic hopefuls until she runs out of money. Sydney faces another challenge and rescues an injured mare and things turn around.

• “Gold” by Chris Cleeve is the story of two women who are friends and rivals. On their last chance to become part of Olympic history, they challenge themselves and each other in competition and on a personal level.

• “Fast Girls: a Novel of the 1839 Women’s Olympic Team” by Elise Hooper is a fictional account of the lives of three little-known women and their fight for the 1936 Berlin Olympics. This is the story of women trying to take their place in a world on the verge of war.

• A youth novel “Coming Up for Air” by Miranda Kenneally brings a young woman training for the Olympic Games to the knowledge of missed opportunities. When college attendance forces her to admit what she missed, Maggie tries to have the best of both worlds during her senior year of high school.

The nice thing about the Olympics is that anyone can compete. Follow the athletes as they try to own the gold in these and other titles available at the Manistee County Library. For more information about the library, including branches and opening times, visit manisteelibrary.org online.

Kim Jankowiak and Becca Brown of Manistee County Library are writing the recurring feature On the Same Page, which showcases the library’s available titles around a revolving theme. Jankowiak is the reference librarian and Brown is the library’s lending officer.

Tucson man wants to claim financial damage against the city…