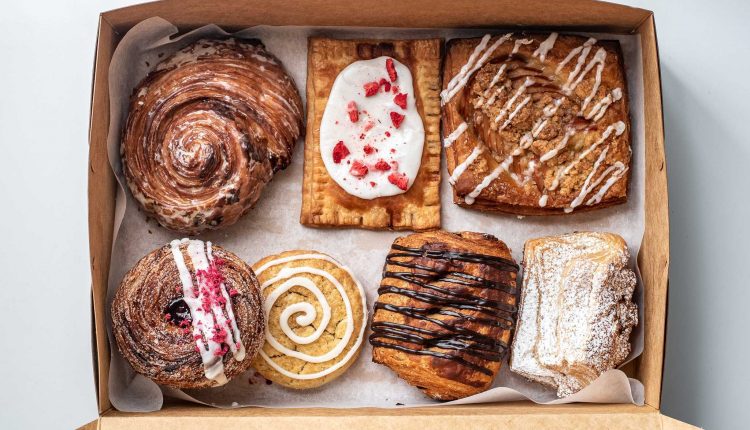 Get a load of these local bites

The month of July was full of edible treasures, to say the least.

From pizza to ramen and assorted vegan pastries, there were a lot of tasty moments for the Foodie team. Not only are these reminders of the dishes we ate, they can also be a guide for your own decisions on what to eat here in Tucson.

Without further ado, here are a few of our favorite food experiences.

I did the “Chef’s Trust Me” menu at PY Steakhouse this month and it was stupidly good. The first (out of five courses) was particularly ‘grammable — Kumomoto Oysters with prickly pear vinegar, freeze-dried prickly pear, cucumber, and mint oil. If you ever have the opportunity to request this menu (make sure you note that when making your reservation) I highly, highly recommend it.

My July favorite comes from the “Sexy Grilled Cheese” menu at Dante’s Fire. Talk about gilding the lily — or carb overload. This is a grilled cheese sandwich filled with creamy mac ‘n’ cheese and sided with house-made dill potato chips. Rich and delicious. Nutella pizza? Yes, please! If you like fresh strawberries, blueberries, powdered sugar, and a drizzling of hazelnut and chocolate on wood-fired dough (and who doesn’t?), Fiamme’s delicious dessert pizza is for you. Everything Ensenada serves makes my mouth water, but their Vegan Ramen Birria and Vegan Ceviche are my new favorites. Lots of vegan and non-vegan options are available. Tohono Chul’s seasonal brunch menu always features at least one beautiful vegan dish. I enjoyed their Blue Corn Vegan Tostadas with a hot and creamy coffee. My mom and I shopped at Tohono Chul’s plant nursery after our delicious meal. I did a photoshoot with Houlden’s Rise Above and ate a variety of their vegan pastries. My fave was the chocolate croissant. I’m a butter fiend but didn’t miss the milk fat with this vegan flaky crust and rich vegan dark chocolate. I respect the heck out of all the technique used to make something so simple so special. Assorted pastries at Houlden’s Rise Above (Photo by Jackie Tran) Assorted pastries at Houlden’s Rise Above (Photo by Jackie Tran)

My July favorite is the Southern Seafood Boil medley of Gulf shrimp, snow crab, Andouille sausage, yellow corn, and red potatoes available at The Delta because it’s shrimply the best. Southern Seafood Boil at The Delta (Photo by Kim Johnston)

After a lot of meat-heavy dishes lately, I just wanted some delicious vegan fare. Luckily I live near Govinda’s and got their Sunday brunch buffet. They had these Curried Lentil Croquettes that I went absolutely mad over. Literally my new vegan treat obsession. They were so tasty, so regal with curry and spice, that I’m going to call now and then and bug ’em asking if they have them. When they do… boink! La Chefita is a new food truck usually parked at Irvington and I-19 that serves up something called Remolinos, which are deep-fried spiralized potatoes served on a skewer. Their namesake is topped with succulent smoked brisket, shredded cheese, nacho cheese, green onions, and either tangy barbecue or spicy chipotle sauce. I got the chipotle and, oh man, this potato tornado nearly did me in but for all the right reasons. Absolutely delicious and easily shareable. I wrote about Kim’s Confections a while ago because I had to let everyone know that her goodies are the good-est. Kim’s Chocolate Chunk with Salted Pistachios Cookies is something I always have in the pantry for the perfect nibble of sweet, salty, gooey, yummy, dainty, and awesome. You can find Kim’s stuff in various markets, pop-ups, and through her website — I highly advise you to do so. Her ice cream is amazing, too. But those cookies, though! And people wonder why I can’t lose weight… Plus, it’s BYOB so make your way over to Roy’s Corner Liquor found at 647 S. Sixth Ave. Grab yourself a cold one from the fridge before walking into Cafe Desta and have a great time. An evening at home with Fettuccine Alfredo with chicken from Roma Imports, a slice of Pain au Levain from Barrio Bread, and a glass of vino from Plaza Liquors. Everything you might need without having to get all dressed up. So happy that Tooley’s is back. Pictured below is the savory Turkey Burro. Transplant has become my pizza night go-to. Between their noteworthy selection of build-your-own toppings, impeccably balanced crust, bringing both crunch and fluff, and the fact that I can get a cheese-free pizza that isn’t dry or bland, I always leave feeling fed in multiple ways . Pictured below has a Buffalo sauce base, roasted corn, zucchini, mushroom, black olives, and Green Goddess drizzle. My pick of the month is the Mahi Mahi Quesabirria at El Rustico. Chef Juan started slinging tacos at the Tohono O’odham Swap Meet and eventually opened up El Rustico. A few years ago he jumped on the quesabirria bandwagon and whaddayaknow — now he sells over 100,000/year. According to boss Travis Petersexecutive boss at The Parish other The Delta, Rustico serves the best tacos in Tucson. I can’t disagree. Vegan Quesabirria from Taqueria La Esquina. They use jackfruit and it’s so delicious! Have a favorite please this month? Let us know in the comments.