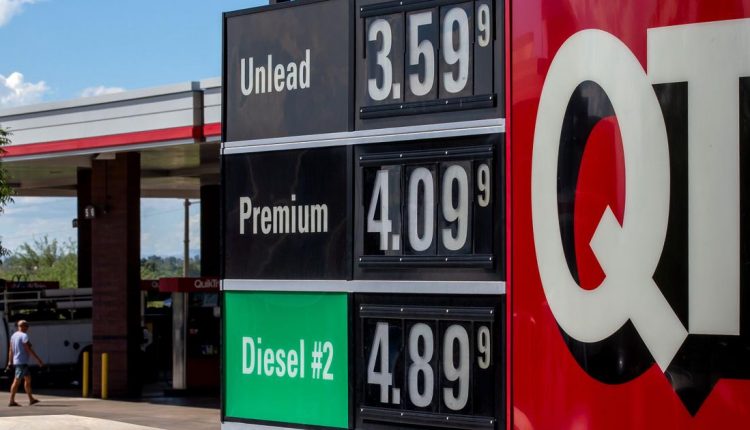 It may be worth driving a little further to fill up your gas tank these days in Tucson.

The recent plunge in gas prices in the Old Pueblo and across the nation has widened the normal disparity in pump prices across town, with a spread of more than 90 cents per gallon between the highest and lowest prices for regular gas across the metro area — and variances of 40 cents or more for stations within just a few miles in some cases.

Gas prices typically vary by geographic region and at the neighborhood level because of local competition, with a typical price spread of a dollar or more in some large metro areas, according to Patrick De Haan, head of petroleum analysis for the gas-price finder app GasBuddy.

Tucson is no exception, but as gas prices have dropped rapidly in recent months off record highs in June, the price disparity among stations within a few miles has widened.

In some cases, there are wide price variances even among the same store chains within a few miles.

Neither Circle K nor QuikTrip responded to requests for comments on their pricing variances.

The average price of regular gas in Tucson on Wednesday was $3.53 per gallon, down about 7 cents from a week earlier, according to AAA, which is based on electronic purchases tracked by the Oil Price Information Service.

That’s down from a record-high $4.98 per gallon in mid-June but still up about 50 cents from the same time last year.

GasBuddy, which relies on members to enter what they paid for gas at a particular retail outlet, pegged Tucson’s average price at $3.49 per gallon.

But many stations around town were selling gas for under $3.20, and membership-based Costco had the lowest price at $3.08.

GasBuddy’s De Haan said the price spread — the difference between highest and lowest — for gas varies by state and by market.

For example, this week, the price spread in Arizona was $1.10, while in California it was $1.70, he said, noting that Arizona’s price spread could be affected by some very high prices at a couple of stations.

The price spread in the greater Tucson metro area was 91 cents this week, according to GasBuddy, but that included two stations selling gas for $3.99 per gallon, with higher-priced outlets generally in the $3.40-$3.70 range.

He cited a $1.37 spread in Denver and 30-cent variance in much smaller Billings, Montana.

Wide price spreads among gas stations within a mile or two are rare, De Haan said, as stations compete on price.

But the price differences may be magnified by the rapid drop in overall prices, recently driven by lower crude-oil costs.

“When prices go up, the spread narrows, and when prices come down, the spread widens,” De Haan said. “Since we’ve been in such a long trend of downward prices, there’s a lot of variance on the way down, especially in this circumstance.”

Arizona’s statewide average gas price peaked at a record $5.39 per gallon of regular on June 17 and averaged about $4.05 per gallon on Wednesday, according to AAA.

Recent maintenance issues at refineries in California may also be a factor, since Arizona gets much of its gas from the Golden State, De Haan said.

“There could be a little bit of kind of lumpiness going on, because with some of these refinery issues, some refiners that are selling into the market may not have as much fuel to sell, so they price higher,” he said.

This week the price spread for what retailers pay for wholesale gas was about 50 cents per gallon, De Haan noted.

But 55% of convenience stores are single-store operators, according to the National Association of Convenience Stores, and more than 60% of gas stations are independently owned, including some that sell branded gas like Shell.

Nationwide the main driver of price disparities are taxes, the cost of special, cleaner gas blends required in areas (including Phoenix); and profit margins, which average about 10 cents per gallon, the NACS says.

The wholesale cost retailers pay for gas varies depending on their purchase volume, whether they sell branded fuel (which generally costs more), competition discounts sometimes allowed to retailers and the cost of real estate, while the price retailers charge vary based on their business strategies , the association says.

Independent store owners who run branded gas stations have no choice but to buy from their contracted brand, but others can buy cheaper wholesale fuel as it becomes available, De Haan said.

“The independents today are the cheapest by 5 to 10 cents,” he said. “So, if you’re Joe’s gas station that doesn’t have like a big company oil company logo, you can buy the so-called leftovers for a little bit less.”

Crude oil makes up 54% of the retail cost of gasoline, but each station sets prices based on its costs and local competition, said Kara Greene, spokeswoman for the Western States Petroleum Association.

“At the other end of the spectrum, real estate value, convenience of a station for the driver, and competition among stations affect cost, too,” said Greene, whose association represents major oil refiners.

Regionally, Tucson tends to have the cheapest gas in the state partly due to the fact it gets much of its fuel from a pipeline that delivers less expensive fuel from refineries in Texas.

The Phoenix area gets generally more expensive fuel via a pipeline from California, and Maricopa County uses a special year-round formula to reduce emissions, which adds cost. Gas prices in places in rural areas tend to be higher because fuel must be trucked over long distances.

While it may not be worth it to drive cross-town to save a few cents per gallon, with the current wide gas price spreads it may be well worth driving a couple of miles out of your way to save 30 or 40 cents per gallon.

You can find the Star’s interactive map of recent local gas prices, with data provided by GasBuddy, at tucne.ws/1l4o. GasBuddy also is available as an app that offers rewards and savings on fuel.