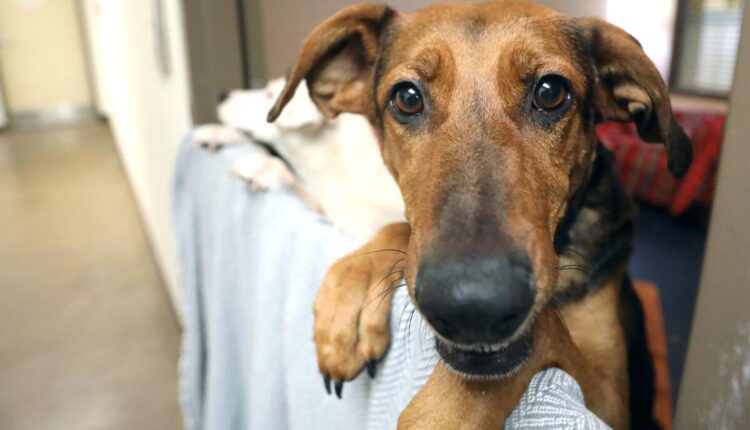 High Country Humane at capacity with an unprecedented number of animals

According to Executive Director Liz Olson, the situation at High Country Humane is dire: the shelter is at critical capacity.

Four years ago, HCH obtained the contract from the City of Flagstaff and Coconino County to operate as the primary animal shelter and holding facility for animals picked up by animal control. They don’t euthanize animals for space, relying instead on shelter transfers and fosters to combat overflow.

They have the capacity to serve about 143 animals at a time. As of Monday night, HCH had 189 animals in its system.

Right now, animals are sleeping in conference rooms and bathrooms, bunking two or more to a kennel where possible, and spending their days sharing offices with HCH staff. All hands are on deck — the shelter is calling on all current and potential foster families to come forward and assume care for animals in need.

Even Olson is fostering. She’s looking after a litter of seven kittens and a 4-week-old puppy that was abandoned and found nearly frozen to death at a gas station.

Warmer, not colder, weather typically means animal shelters will be more crowded. Litters of puppies and kittens are more likely to need care and placement during the spring and summer. Usually fewer baby animals are born in the winter.

This year, the litter just kept coming. According to Olson, puppies and kittens continue to arrive on the shelter’s doorstep every day. New babies are being born in the cold weather, and Olson is baffled by the development.

“It used to be that when it would get cold, litters would stop coming in because the mating system diminished. We have puppies. We’ve been getting kittens in. Animals are wandering and breeding,” Olson said. “Last winter we didn’t see kittens all winter, but we saw kittens all year this year. We’ve seen more unwanted litter that are dumped at parks or at the gas stations or the side of the road. I have never experienced that. It feels like what we know about animal welfare and what we’ve experienced is that things slow down in November. The occupancy is manageable.”

Not this year. According to Olson, the November quiet never set in. “What does that mean this upcoming spring? First of all, we can’t manage this,” she said.

Before Christmas, the cat condos inside the facility on Highway 89 were crowded, in addition to the kennels. The shelter made a big decision to waive adoption fees before the holiday, in hopes of making space and helping more pets find their homes forever.

“Waiving fees can be very healthy — we’ve seen it bring good adopters, good people, and it moves animals. We have to move animals,” Olson said.

Adoption fees bring in roughly $200,000 a year for the shelter, an important chunk of the budget. Olson said waiving fees means the shelter loses money. “We have fixed an animal, gotten them microchipped, and fully vaccinated. When we waive fees an animal walks out the door completely vetted for free,” Olson said. “I know as a director we do not and cannot count on adoption fees. In the long run it’s more important to get animals adopted.”

A number of cats were adopted when fees were waived before Christmas, and the adoption special helped. It just might not have done enough.

“The crisis right now is adult dogs and puppies in the building, more than we have capacity for,” Olson said.

It’s not entirely clear why there are so many animals pouring into the shelter. Intake numbers have risen since COVID, and perhaps pandemic stresses are driving more people to forego pet ownership, but Olson thinks that’s only a part of the picture. Most of the animals arriving at HCH are strays, meaning they don’t appear to have an owner.

“A stray animal literally has nowhere to go. An owned animal has that,” Olson said.

That’s why HCH does everything they can to keep pets with their owners. They practice something called “managed intake,” an evidence-based approach to keeping animals safer, happier and out of the shelter system.

Owners wishing to surrender a pet have to first fill out an application, then sit down with HCH staff for a consult. The shelter regularly helps owners cover the costs of medical care, food and other expenses to help keep pets at home. They also offer connections to behavioral training resources, and often help to pay for those too.

Still, HCH receives between one and five owner surrender requests a day.

The majority of those surrenders could link back to Flagstaff’s human housing crisis. the no 1 reason for pet surrenders, as listed on intake applications, is “moving or housing issues,” followed by the arrival of a new baby and behavioral issues.

“It’s this daily influx where the public brings animals in, animal control brings animals in, and sometimes we’ll get the most drop-offs on a random Tuesday. Suddenly we’ll get 20 animals at a time. It’s not linked to holidays, we don’t even have a busiest day of the week. It’s completely random,” Olson said.

The problem is not unique to HCH and Flagstaff. Animal shelters across the region are reporting higher occupancy numbers.

This leaves HCH with no options to transfer animals to another shelter, unless they start putting dogs and cats on planes to fly to shelters in the Northeast. That option is neither economically feasible nor particularly good for the well-being of the animals, Olson said.

“We’d have to put an animal on an airplane. How stressful is that for an animal? And it’s the winter. It’s cold and snowing, and they’re being loaded onto a plane to go to a completely unfamiliar place. It’s not reasonable to coordinate that on a regular basis,” she said.

“They’re helping a lot of the animals that we can’t help,” she said. “A lot of the time they’re full too.”

The two shelters have not transferred animals between facilities.

In addition to having too many animals to care for, HCH faces another problem: They don’t have enough people on staff.

“We are beyond our capacity. It’s not healthy. We are extending ourselves, our staff. We see burnout and compassion fatigue,” Olson said. HCH is budgeted to employ about 35 people. There are 25 people on staff, leaving both leadership and entry-level positions empty.

The shelter has designed a system that utilizes foster parents or families to help relieve some of the pressure on shelter staff — keeping animals out of kennels and condos. In reality, the shelter facility was only designed to house about 47 animals, maximum, at a time. HCH relies heavily on foster volunteers to make up the difference.

Of the 171 animals in HCH’s system as of Tuesday evening, 126 are being fostered. There were still 57 animals in the facility on Christmas Eve — 10 over capacity.

“We don’t euthanize for space and time, because we don’t believe in that. We have to be transparent about the numbers, get animals into foster care, and get transfer partners. Right now, we’re begging for community support,” Olson said. “We’re facing making critical decisions. It’s not a place we want to be in. We’re a progressive animal-loving community.”

There are people who are stepping up, to try and lighten the load for HCH. Aaron White has been fostering dogs for the shelter for two and a half years.

In that time, he’s welcomed a half-dozen dogs into his home. Dogs of different ages and different breeds. Right now, he’s caring for an Australian Shepherd Mix called Jet, who tested positive for distemper and needed to be outside of the shelter environment to keep from spreading the contagious disease.

Jet is otherwise healthy and White said he’s adjusted to a regular routine and has never had an accident in the house. Routine, he said, is one of the keys to fostering. White works full time, sometimes more than 40 hours a week, and said it’s possible to make a big impact in an animal’s life while still living your own.

“My argument would be, it’s like better than dog ownership. You get to impact some pooch’s life and you can send him off and he can enlighten and help more people. The nice thing about fostering is it’s like being a grandparent, I get to eventually be dogless for a few weeks…but I like having dogs around,” White said. Further aligning with the grandparent comparison, White said he doesn’t have to pay for dog food, supplies, or medical expenses for the canines in his care. Those costs are handled by HCH.

He said his favorite thing about fostering is seeing animals adopted. One of his favorite four-legged friends is a Pitbull called Doug, whom White describes as an all-star foster. White gets pictures and updates from Doug’s forever dog mom. Knowing that the animal went on to a bright future and that he can be a safe person and place for them in the meantime is what motivates him.

Ultimately, adoption is the end goal of fostering. So, would-be pet owners are encouraged to visit the shelter. If you can’t welcome another animal into your household, whether as a foster or full time owner, Olson said donations is one of the next best things. They support intake management programs that keep dogs and cats in their current homes, and help to cover the costs of running a full or overfull shelter facility.

“In the 4 years of operation, intake numbers have grown in the hundreds every single year. We need individual contributions…we need predictable monthly donors,” Olson said.

The other number one thing Northern Arizonans can do to help with the crisis is to ensure that their pets and feral animals that might be on their property are spayed or neutered. The best way to curb the onslaught of unwanted litters is to seek spay-neuter resources.

According to Olson, 75% of the animals the shelter takes in are intact (meaning they can still produce offspring). Shelter veterinarians are performing an average of 90 spay/neuter surgeries a week.

Having the animals in your life spayed or neutered, Olson said, is the first step to ending the crisis.