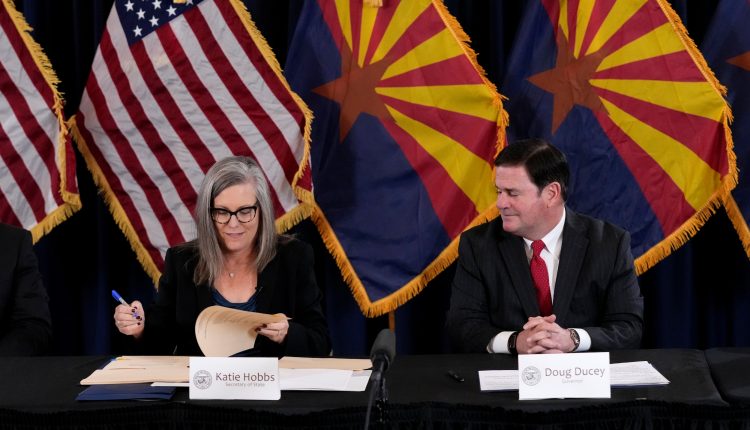 The state’s top officials on Monday certified the canvass of Arizona’s midterm election, after a dramatic runup to the certification in which one county had to be forced by court order to certify its own election results to send to the state.

Despite calls from some Republicans not to certify because of what they claim was voter disenfranchisement that affected election outcomes, Secretary of state and Gov.-elect Katie Hobbs and Gov. Doug Ducey signed the statewide canvass of votes, while Attorney General Mark Brnovich and Arizona Supreme Court Chief Justice Robert Brutinel signed as witnesses.

And while protesters gathered outside the Executive Tower at the state Capitol following the 2020 election to protest what they falsely claimed was a “stolen” election, the scene was quiet on Monday as the election was certified. The only people present outside the building were Arizona Department of Corrections, Rehabilitation and Reentry inmates on work release cleaning the Capitol grounds on the overcast day.

Now that the election results are official, the legal actions will begin.

First, Hobbs said her office will go to court today to file orders for recounts in the three state races that triggered Arizona’s new automatic recount law because the margins between candidates were 0.5% or less.

“(A)s we head into this recount with a 510 vote lead, we feel confident the end result will be the same, and I’m looking forward to being your Lawyer for the People,” Mayes said in a written statement after the canvass.

The official state election certification opens up a five-day window during which candidates can bring lawsuits challenging the election results. Hamadeh filed a suit Nov. 22 challenging the results of the election, but a judge threw it out, saying the suit was premature — but that he could refile after the results were certified. Hamadeh and failed Republican candidate for governor Kari Lake are both expected to file suits this week.

While she didn’t name names, before Hobbs signed off on the canvass, she spoke of the rampant election denialism that pervaded the midterm election, much of which continues to come from Lake, her opponent in the governor’s race.

Lake, who lost the race by more than 17,000 votes, has still not conceded, has already filed a suit demanding election information and has promised continued legal action. Lake was a guest on former Trump strategist Steve Bannon’s podcast Monday morning, telling him she was ready to take her upcoming election suit all the way to the Supreme Court.

She also called out fellow Republicans Ducey and Brnovich for participating in the election certification, saying that voters in the midterm were disrespected, disregarded and disenfranchised.

“They will be remembered in history as cowards, or worse,” Lake said, adding that she believes the midterm election in Arizona was “a sham.”

In a statement issued after the canvass, Brnovich noted that his participation was compelled by the state constitution and laws.

“The Attorney General’s participation in today’s canvass serves as neither an endorsement of the election results nor the lawfulness under which the election was conducted,” the statement read.

“Arizona had a successful election, but too often throughout the process, powerful voices proliferated misinformation that threatened to disenfranchise voters,” Hobbs said. “Democracy prevailed, but it’s not out of the woods.”

Hobbs said she expects this trend to continue through the next presidential election in 2024 and asked Arizonans to combat election denialism by getting involved and sharing accurate information.

“As we’ve learned in these past few years, protecting our democracy requires everyone’s participation to help discern truth from fiction and listen to experts seeking to uphold our laws and republic, rather than promote conspiracies,” the governor-elect said. “False claims that undermine our democracy remain prevalent. We need to look no further than the effort by some elected officials last week to prevent this canvass from happening and refusing to uphold Arizona’s election laws.”

Hobbs was referring to Cochise County, with two Republican county supervisors, Peggy Judd and Tom Crosby, who refused to vote to certify their county election results by the mandated deadline because of what they first said were issues with election equipment certification, but later said was a protest of Election Day problems in Maricopa County.

The county supervisors finally voted 2-0 to certify the election results last week, but only after a Pima County judge ordered them to do so. Judd and Democratic supervisor Ann English voted to certify the canvass, while Crosby refused to attend the court-ordered emergency board meeting.

Hobbs sent a letter to state and county attorneys Friday asking that Crosby and Judd be criminally investigated and prosecuted for failing to certify the election results, something county boards are bound to do by state law.

Hobbs on Monday highlighted many of the safeguards and checks in place to ensure fair and secure elections in Arizona, including the involvement of poll workers and observers from both parties at polling places and tabulation centers, certification of election equipment at the state and federal level and hand-count audits in each county to ensure the accuracy of tabulation machines.

Both Hobbs and Ducey thanked the state and county employees and volunteers who worked in this year’s election.

“Voting is a fundamental principle of our nation’s Democracy,” Ducey said. “It’s an important right and an effective method in ensuring Americans’ voices are heard.”

***UPDATE: This story has been updated to include comments from Kari Lake and Mark Brnovich.