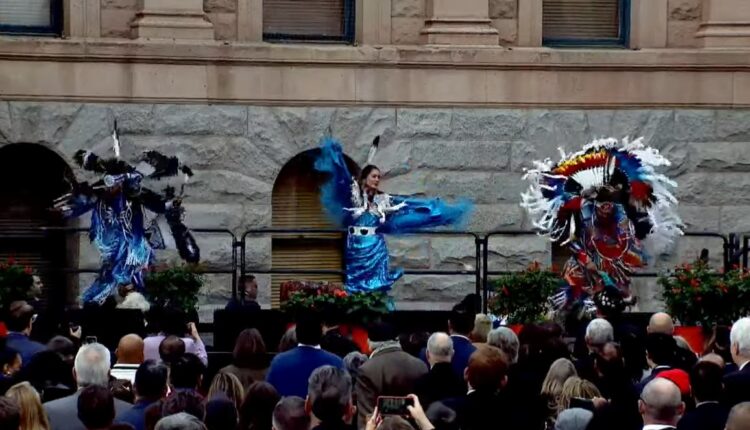 Ignacio attended the inauguration ceremony and was excited to see Indigenous representation at the forefront of the state Capitol  — also at seeing tribal leaders in attendance just as excited as she was.

“The highest position here in Arizona has completely recognized that Natives need to be included in all conversations, and she has already created positions to have Natives included on her staff,” Ignacio said. “That is something that tribes have wanted for years.”

During the inauguration ceremony, she showed Arizona she was serious by featuring Indigenous people throughout, including in her speech.

“We must acknowledge we are here because of the first people who have called this place home since time immemorial, and where we gather at this moment continues to be connected to the O’odham of the Salt River Pima-Maricopa Indian Community,” Hobbs said during her inauguration speech. “Let us also acknowledge the 22 tribal nations that today continue to be a vital part of our great state and Nation.”

Gila River Indian Community Governor Stephen Roe Lewis gave an opening prayer, paying tribute to the ancestral homelands of his people, the O’odham and Peeposh, who have lived on and farmed the land since long before Europeans colonized what is now Arizona.

“From the flowing waters of the Keli Akimel, or the ancient Gila River, whose lives still depend on these waters. Today, I carry the water from our Gila River as a sacred — but real — symbol that our Shuhthagi, our water, connects us all and is the necessary connection that binds us now and into the future,” Lewis said during his opening prayer, holding up a vial of water he wore around his neck.

Hobbs had a Native dance troupe, Indigenous Enterprise, close out the ceremony. The group of champion American and Canadian dancers, which was formed in 2015, has toured the world and participated in a “virtual parade” for President Joe Biden’s 2021 inauguration.

If tribes are at the table, you have a voice, you’re part of the conversation, you’re not forgotten. I believe we’re going to see that in the next four years from Governor Hobbs.

Alfred Urbina, the attorney general of the Pascua Yaqui Tribe, attended the inauguration and told the Arizona Mirror that seeing tribes spotlighted during the ceremony and in Hobbs administration plans is refreshing.

As part of Hobbs’ plans to facilitate tribal sovereignty and partnership she intends to revitalize the Office of Tribal Relations, hire a dedicated tribal policy advisor and bring in stakeholders to work on pressing issues that face Arizona tribes.

Hobbs laid out several ways her administration intends to work with Arizona’s tribes in her Indigenous communities plan. These include tribal sovereignty and partnership; economic security and opportunity; child welfare; the next generation of leaders; voting rights; an accountable justice system; adequate access to health care and water rights.

“I believe we’re going to see some of these policies and platform issues become a reality,” Urbina said. When Hobbs meets up with tribal leaders, Urbina noted that it’s something they can all talk about to discuss what the issues are and where they stand.

“If tribes are at the table, you have a voice, you’re part of the conversation, you’re not forgotten,” Urbina said. “I believe we’re going to see that in the next four years from Governor Hobbs.”

Hobbs has already made a step forward on her Indigenous communities plan, hiring Jason Chavez as her tribal affairs director. Chavez is a citizen of the Tohono O’odham Nation and from the San Miguel Community in the Chukut Kuk District. He served as the elections outreach manager in the Arizona Secretary of State’s Office during Hobbs’ time as secretary of state.

Urbina was also part of Hobbs’s transition team, and he worked with a few other tribal leaders to help identify diverse candidates for positions within the Hobbs administration to ensure that the candidates reflected the diversity of the state.

He said it’s refreshing to see how tribes will be more included in the administration. He’s been working for the Pascua Yaqui Tribe for more than ten years, and Urbina said in that time, he’s noticed that Arizona’s tribes have always been an afterthought at the state Capitol when it comes to the drafting and passage of laws.

Tribes are often included in more extensive conversations involving water and gaming, but not so much in the day-to-day bills that affect tribes, like health care or immigration, he noted. Urbina said he expects that to change under Hobbs.

Hobbs also met with several of Arizona’s tribal leaders before the inauguration ceremony. They gathered for breakfast and talked about issues affecting their communities and their experiences as tribal leaders.

Urbina said seeing Hobbs host the tribal leaders before her inauguration was a pleasant exchange because she had coffee and breakfast with them and talked about things informally.

Hobbs shared two photos on social media before her inauguration, one was of her standing with several tribal leaders from across Arizona, and the other was her pictures with the Indigenous women tribal leaders.

Navajo community leader Debbie Nez-Manuel has lived in Maricopa County for more than 30 years. In that time, she said she’s seen administrations come and go, but she believes that Hobbs administration is an excellent opportunity for tribes to get their voices heard.

“As tribal people, we need to prioritize this time to build and connect,” she said. “We need to make sure that we do the work as well. It’s going to take a partnership.”

Nez-Manuel attended the inauguration and said she was in complete awe of all the work voters did in Arizona.

“I can’t help but think about how tiring it must have been on all fronts to get all these individuals elected,” she said.

Being able to see the beauty of it in front of her, Nez-Manuel said she took a deep breath and soaked it all in.

Nez-Manuel said Hobbs’ acknowledgment in her speech of the ancestral homeland of the Akimel O’odham and Pee Posh peoples shows that she understands Arizona.

“I think, for tribal leaders, that was probably something that they felt some comfort in knowing that the governor understands acknowledging the tribes,” Nez-Manuel said. “She set the tone today.”