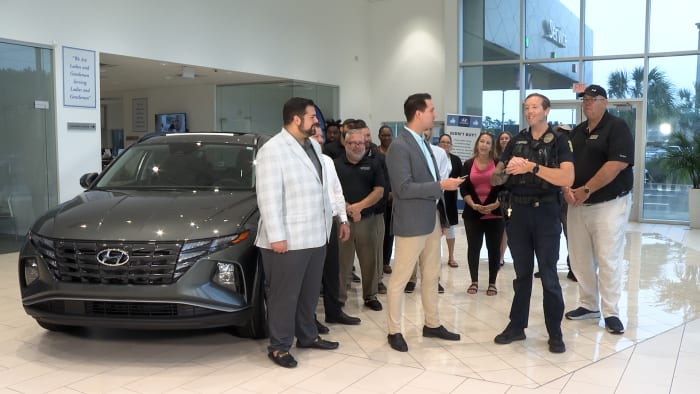 Officer Thomas Harper told me he is beyond grateful to be nominated and win. He’s also happy to have his new keys in hand.

After being handed the keys to his 2022 Hyundai Tucson SUV by the Hyundai Dealers Association of Jacksonville at Jenkins Hyundai Wednesday, Officer Thomas Harper was finally able to get behind the wheel of his new ride.

“It’s amazing. It’s a gorgeous car. I’m still shocked. I really like it a lot,” the 4-year veteran said.

In August, Ofc. Harper beat out 174 other nominees in the first responder category and received nearly 400 votes.

“I’m not good with words, so I can’t express my appreciation enough, but I am beyond thankful,” he said.

Rebecca Harris nominated Harper and said he goes above and beyond to protect and serve the community. It was his brave actions that first caught Harris’ eye. Here is the nomination she entered on Ofc. Harper’s behalf:

I first met Thomas when he was injured in 2019 while assisting with an ocean rescue as a law enforcement officer for the Jacksonville Beach Police Department. I met him three more times within that same year for different injuries he sustained while protecting his community. Thomas never hesitates to go directly toward the threat. He has continued his training in hostage negotiations and is consistently striving to improve himself in his career. Thomas received a Meritorious Service Award in 2021 for assisting a civilian and saving her life by applying a tourniquet correctly. Thomas became a law enforcement officer to help people and I see him do it every day. I believed so much in this officer and the department that he works for that I became president of their civilian volunteer group to offer support to these men and women. While I feel each of them deserves to win, Thomas has shown over and over that he is truly committed to giving his life to keep his community safe. He always has a smile on his face and treats everyone he encounters with the same respect he expects to receive. Thomas is one of the good ones and for that, I think he deserves to win.

Ofc. Harper said his fellow officers at the department share his excitement.

“Very excited for me. They’ve been having some fun with it too. I’ll walk into the station, and they’ll say, ‘Oh, the Hometown Hero is here.’ Stuff like that, so they have fun with it. Everyone’s been very supportive.”

Standing tall at six feet, three inches, Harper said he’s excited to have the extra legroom. He also says his new ride is made for him down to the color.

“The color is perfect. Something I would’ve picked myself. A bunch of technology and wireless charging that I didn’t know even existed,” he said while getting a first look at the Tucson.

An avid mountain biker, he’s ready to load up his SUV and hit the road to do some of his favorite things and also let the police department see it in person.

“I do plan on taking it to the station and showing some people.” Amanda: “And taking them for a spin too, I’m sure?”

“Maybe, if they’re lucky enough,” Harper said with a smile.

Ofc. Harper says winning this vehicle is a reminder that his dedication doesn’t go unnoticed.

“I’m amazed by the support of everyone. I’ve had a couple of people I didn’t know just come up to me off the street and say congratulations. It’s been very nice to know that there are people out there that support us and appreciate us,” he said.

When he’s not on patrol, Ofc. Harper is a volunteer with the Big Brothers, Big Sisters of America program whose mission is to “create and support one-to-one mentoring relationships that ignite the power and promise of youth”.

Ofc. Harper first began his career in law enforcement in 2015 as a deputy for the Leon County Sheriff’s Office in the panhandle. Ofc. Harper first moved to Jacksonville when he was 8 years old and considers it his home.

claims of legal confusion over AZ abortion laws are unfounded