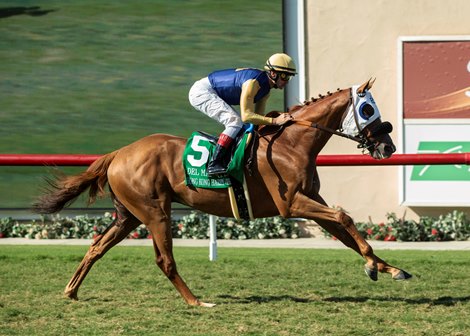 The 5-year-old son of Es Que Love rebounded from a troubled runner-up finish in the July 31 Eddie Read Stakes (G2T) at Del Mar and continued to improve his form at the seaside oval for trainer Phil D’Amato after making the grade for the first time June 19 in the American Stakes (G3T) at Santa Anita Park.

Air Force Red struck out for the early lead through a swift opening quarter at :22.44, but was quickly headed by Goliad through a hot half in :45 as Prat bided his time in sixth aboard the eventual winner. Goliad opened up a four-length advantage through three-quarters in 1:08.29, but tired off the turn for home and gave the advantage back to Air Force Red through a 1:21.23 seven-furlong split.

Irideo who surged from fifth to close inside the winner, nabbed second by 1 1/4 lengths, while Cathkin Peak rallied from even further back in the ninth to complete the trifecta.

“We had a good trip,” Prat said. “The pace was strong. I got lucky when I was able to drop myself inside around the turn, and he made a good run when I asked him to do it. The leader was really far in front. Obviously, that’s the way he ran last time, so I didn’t know if he was going to come back to me. I rode this horse for his first race in the country and really liked him a lot. It seems like he’s improving a lot and is getting even better. ”

Owned by Scott Anastasi, Jimmy Ukegawa, Tony Valazza, Hong Kong Harry improved his earnings to $415,097 with an 8-2-1 record from 12 starts. He has won four of his five starts in the United States after the beginning of his career with seven starts in Ireland.

“When Goliad kicked away at the three-eighths pole, I didn’t know if it was going to be a super freaky effort or not,” D’Amato said. “Flavien was sitting in the right spot. Around the quarter pole my horse was picking up steam, angling out and ready to kick in. Once he did, I thought it was just a matter of time, and he did it stylishly.”

Hong Kong Harry was bred in Ireland by Amarath Business Management out of the Gold Away mare vital body whose last reported foal is an unnamed yearling colt by kodiac .

Though trainer D’Amato didn’t come into the Del Mar Handicap Presented by The Japan Racing Association (G2T) with the favorite, he came away with the victory—just as he has historically done in the race.

For the seventh time in the last nine years, D’Amato won the 1 3/8-mile, $303,000 turf race, this time doing so with late-running gold phoenix who, under Prat, edged Master piece in a head-bobbing thriller. With the Del Mar Handicap serving as Breeders’ Cup Challenge qualifier, Gold Phoenix earned an automatic, paid berth in the Nov. 5 Longines Breeders’ Cup Turf (G1T) at Keenland.

While the Del Mar Handicap may belong to D’Amato, much of Saturday’s 11-race program at Del Mar belonged to Prat, who a race earlier took the TVG Pacific Classic (G1) by 19 1/4 lengths on flight line .

The jockey, who shifted his tack east this spring after regularly topping the standings in Southern California, had to work much harder on Gold Phoenix, and at the wire, the margin was a head.

Billy Koch of Little Red Feather Racing, which owns Gold Phoenix with Sterling Stables and Marsha Naify, praised Prat and D’Amato after the race in an interview with TVG’s Britney Eurton. He quipped that he told Prat in the paddock to ride their horse “just like Flightline.”

“Really, thank you to Prat for coming into town, and obviously Phil D’Amato owns this race. He’s the best trainer,” Koch added.

Gold Phoenix, a 4-year-old gelded son of Belardo , turned into his customarily honest effort Saturday. Never off the board now in eight starts, he notched his first stakes victory after only making one prior stakes start before Saturday, a third-place finish in the Charlie Whittingham Stakes (G2T) April 30 at Santa Anita.

Bred in Ireland by Mighty Universe, Gold Phoenix is ​​the sole winner out of the winning Mizzen Mast mare Magnifica from her six foals, four of whom have raced. Magnifica is a full sister to graded stakes winners Sea Defence other jib boom .