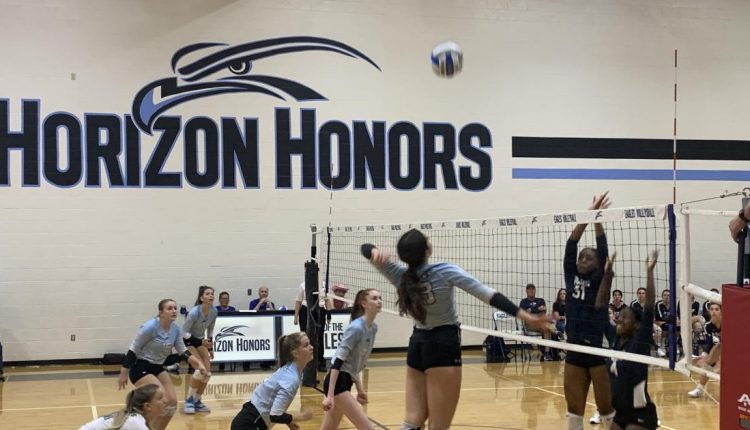 Horizon Honors improved its record to 16-5 and Phoenix Country Day fell to 7-3, which includes its tournament wins and losses.

“We expected a five-set match to be honest,” Horizon Honors head coach Amanda Bors said. “Phoenix Country Day has a great team, and I think we’re a great team, too. …

“We learned that we need to play together, and using each one of the girls’ personal skills makes us more successful.”

The mantra of coming and playing together as one came to fruition in the fifth set.

After taking the set’s first point, Horizon Honors dropped four straight points. Three of them were aces from PCD freshman outside hitter Asia Harper. But any doubt the home faithful had while being down 4-1 in the fifth positively changed because its senior middle blocker Jade Collins.

Her kill down the left sideline brought Horizon Honors within two points, which reenergized her teammates.

“The girls really trust Jade,” Bors said. “They have confidence in her and her abilities to put the ball away and help our team be successful.”

That spark and confidence began Horizon Honors’ match-ending 13-5 run. It was fitting the match ended on Collins’ team-high 13th kill in addition to her five blocks, six digs, and four aces.

“It’s a lot of pressure,” Collins said after the match. “But I think that I play better when I know my team trusts me, and I trust each and every one of them. We always talked about trust before every game and that’s probably one of the most important parts of our game [as a team].”

However, that pressure-filled fifth set would not have happened if it weren’t miscues made by Horizon Honors and the stellar performance of Phoenix Country Day sophomore OH Quincy Rodin.

After Horizon Honors won the match’s third game to go up 2-1, they were unable to close the door on the defending champion. A net violation and four touches on Horizon Honors saw Rodin come up to serve for Phoenix Country Day, and she didn’t miss a beat.

Rodin rallied off three straight aces before dropping a point, and on the very next play, she made up for it with a tip kill. Overall, the sophomore outside hitter finished the match with 11 kills, leading Phoenix Country Day in Tuesday night’s showdown.

“She is a really smart player,” Phoenix Country Day head coach Kat Glaeseman said about about Rodin. “She has a really good court sense, and if she doesn’t have hitting going, she can tip and set, or try roll shots. She just has a lot of tools in her toolbox.”

Despite the tough, emotional loss in five sets to Horizon Honors, Glaeseman wants her team to move on and focus on their next match.

Phoenix Country Day will host Tempe Prep on Thursday night, while Horizon Honors will take a visit to Benjamin Franklin before competing in the CPA tournament on Friday and Saturday.

The Wrap: Maine Lobster Week is on; Primo closes in Tucson