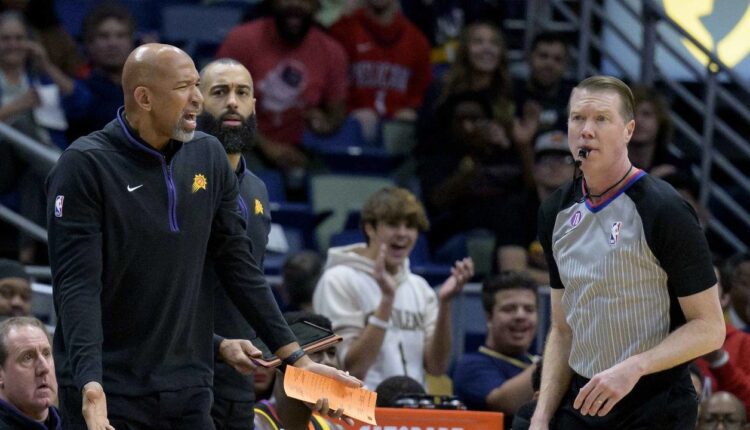 The transition for the Phoenix Suns last season was easier than anyone would have expected.

It was the transition from hunters to hunted. After winning the Western Conference, they won 64 games despite everyone in the league treating them with much more respect as one of the top dogs in the league.

Phoenix did it with a ruthless mentality, refusing to get outworked by the opposition almost every single night and showing up with a different type of edge versus good teams, a requirement to beat those teams consistently.

That Suns team has been MIA this week, with the latest loss on Friday 128-117 to the New Orleans Pelicans following their two worst regular season losses of the Monty Williams/Chris Paul era.

It is the first time the Suns have lost three games in a row in the regular season since January 2021, 16 games into that pairing reuniting in Phoenix.

Phoenix did show some real fight in this one, unlike those two defeats.

To begin the game, the Suns had some much-needed zip to their movement on both ends of the court.

New Orleans, though, matched that intensity and then some. It was always in control of the game, even when a Cam Payne 3-pointer with 4:28 remaining put the Suns up one, their 21st of the game.

Phoenix was quickly down five at under two minutes remaining and lost that fight with the game on the line, allowing the Pelicans to sink in the dagger on an inexcusable defensive possession.

As my fellow podcast co-host Kevin Zimmerman observed himself, it’s odd to see this continue to happen.

The Suns’ 3-point total ended up at 22, marking it down as the 12th loss in the 135-12 record NBA teams now hold when making at least that many triples, per Stathead.

The Pelicans won the battles in all the areas the Suns would have had circled in this one, as they are areas New Orleans gave them problems in last postseason. For points in the paint (72-38), points off turnovers (23-10) and second-chance points (23-9), it wasn’t close.

Devin Booker is just not himself right now. It became obvious when his decision-making, reading of the floor and so on were off. He can go multiple games in a row without showing any sense of hesitation while at the same time not looking like he’s pressing the situation.

Nothing stood out too much over the three games when it came to something bothering him physically until he was trying to run back on defense after his own turnover in the fourth quarter, clearly unable to turn on the jets when he wanted to.

Booker was taken out of the game by Williams with 1:50 to go in an eight-point game, something the head coach never does unless something isn’t OK.

Booker is now shooting 15-of-47 (31.9%) in his last three games, fresh off winning Western Conference Player of the Month. Perhaps the load of the offense without Paul for 14 games has worn on him or it’s something else. He did roll his right ankle a bit in the loss on Monday.

Whatever it is, something is wrong, and the Suns won’t be able to compete at the highest levels against quality competition until he’s right.

Paul looked like himself again as a scorer with a season-high 24 points to go with eight rebounds and seven assists. The shot-making was a welcome addition to the team but Paul also appeared injured in the fourth quarter. When going for a loose ball off his own turnover, he tweaked his right knee and wasn’t moving right for the next three minutes before checking out of the game for his usual mini-rest. He did come back in and finish the game.

The Suns, like everyone else in the league at the moment, had no answer for the Pelicans’ Zion Williamson. He produced 35 points, seven rebounds and four assists via 13-for-17 shooting and was a +30 in 37 minutes.

Williamson had two highlight dunks at the end of the game, with a 360 windmill capping it off at three seconds remaining. The game was long over by then, and Phoenix took exception to it.

The Suns didn’t appreciate this from Zion.

The Suns will get to use that as fuel for the second straight game against the Pelicans in New Orleans on Sunday.

New Orleans was able to mount this offensive effort without Brandon Ingram (ankle) and Herb Jones (toe). Bench points were 56-29 Pelicans, which included 20 from Jose Alvarado and 17 via Larry Nance Jr. that he filled out with nine rebounds, five assists, four steals and a block in 24 minutes.