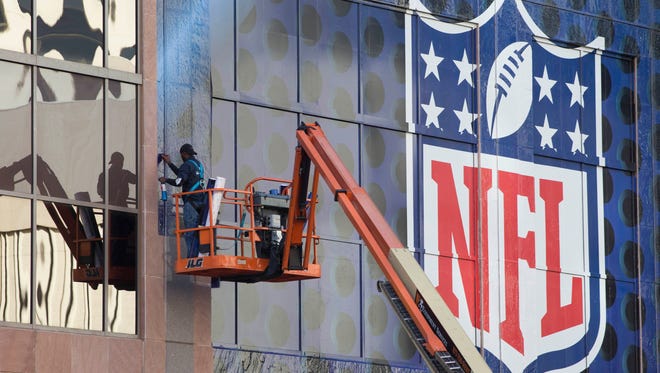 Super Bowl LVII won’t be played for another six months.

But Phoenix-area hotels already have scarce availability for the big game, set for Feb. 12, at State Farm Stadium in Glendale.

Many hotels in metro Phoenix, including Hilton, Marriott and IHG properties, are sold out for the weekend of Feb. 10-12, plus the days after the game, according to a check of hotel reservations websites.

Even hotels in outer areas like Buckeye, Happy Valley and Queen Creek showed no availability during a check of the hotel chains’ reservations websites in early August.

And the hotels with vacancies will cost you.

Forget the fine china;more couples are asking for travel funds on their wedding registry

Smaller chains and independent hotels also are displaying higher rates. Sonder at McKinley, about 17 miles from the stadium in downtown Phoenix, has a studio apartment with a balcony available for $1,367 per night on Super Bowl weekend; the same room is $182 per night Jan 27-30, two weekends before the big game.

“One of our salespeople was trying to bring a small group for a meeting around Super Bowl time and the cheapest rate was around $1,200 per night,” said Eric Kerr, vice president of insights and development with Visit Phoenix, which promotes tourism to the city . “We know a lot of places have their sites filled up.”

Does the Super Bowl 2023 overlap with Phoenix Open golf tournament?

Enormous interest in travel to Phoenix in February is not only because of Super Bowl 57.

This double shot of major sporting events will pack the region’s hotels, especially the Fairmont Scottsdale Princess, the host resort for the WM Phoenix Open.

“We are busy the entire week leading up to Super Bowl Sunday with golf tournament guests who have been staying with us each year for more than a decade,” said John Glynn, spokesman for the Princess.

Many February guests are showing interest in the resort’s upcoming luxury “hotel within a hotel,” the Privado Villas, which has an anticipated fall 2022 debut.

How soon should I book hotel rooms for the Super Bowl LVII?

Finally, the third wave comes from travelers who book as the playoff season starts to pan out, Thompson said. This includes people traveling from the home cities of the teams in the playoffs.

Glendale lists about 12 hotels in the Glendale Sports and Entertainment District that are the closest to State Farm Stadium.

All are sold out for Super Bowl weekend.

These hotels include the Renaissance Phoenix Glendale Hotel & Spa, which saw “very high” demand and at higher room rates than prior Super Bowls.

Steve Eberhart, general manager of the Renaissance Phoenix Glendale, thinks the pent-up demand for travel since the pandemic has kept room occupancy and nightly rates high in recent months.

‘The space was not built for me’:Plus-size flyers say airlines have room to improve

Not everyone wants to come to the US:Gun violence, safety concerns are keeping travelers away

Can you still stay in Phoenix for the Super Bowl?

It’s possible. Cancellations could occur in the months and weeks leading up to the game.

Some people who book early will cancel if their team doesn’t make it in, allowing fans whose teams are going to find a hotel, said Eberhart.

“We hope to have some rooms available to be able to accommodate some of these fans as well,” he said.

If finding a hotel in metro Phoenix for Super Bowl 2023 is impossible or out of your price range, another option is to stay outside the Phoenix area and drive in on game day.

Hotels are available for the weekend in Prescott, about 100 miles from State Farm Stadium, and Tucson, about 129 miles. Most hotels in Prescott are less than $200 a night for the weekend, while most room rates in Tucson fall in the $200s and $300s.

STR, which tracks hotel data, shared this information about how Arizona’s three previous Super Bowls affected occupancy levels and average daily rates in the months they were held:

STR’s data showed that occupancy peaked in March in all three of those years, highlighting the metro area’s importance as a destination for spring break/spring training tourism. February 2008 was the only Super Bowl month with average daily rates that were the highest of the year, according to STR.

Glendale will look to its previous experience hosting the 2008 and 2015 Super Bowls at State Farm Stadium, which opened in 2006. The 1996 Super Bowl was played at Sun Devil Stadium in Tempe.