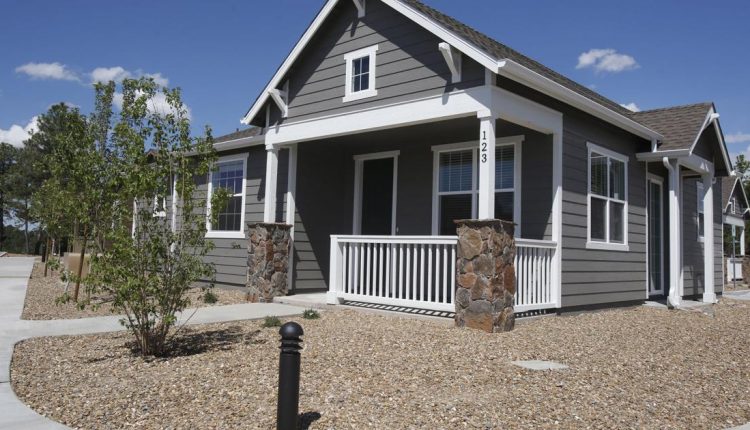 Tad Moore has been a realtor in northern Arizona for the past 16 years and has lived in the city his whole life. The market is “volatile,” he said in a late-June interview, “especially over the past couple of months.”

He said it shifted toward a more balanced market over the summer, though there’s still competition for houses priced under $500,000 or over $900,000.

“But everything in the middle is just kind of squeezed, I think, because of interest rates,” he said.

Pre-pandemic, Flagstaff’s housing market was still booming, Moore said. The city had been hit by the national recession in 2008, but not as hard as other areas, and had mostly returned to normal by 2011 or 2012. After that, it continued to appreciate through the start of 2020.

“Things were on a nice trajectory. It wasn’t as crazy as it was, but it was sort of more normalized,” Moore said of Flagstaff’s pre-pandemic market.

When COVID shut things down in March of 2020, Moore said realtors, like everyone, hadn’t been sure what their field might look like going forward. After businesses began to reopen (as early as May 2020), there was a “significant” upward trend, which has generally continued.

Moore, who is a realtor with Best Homes Realty Flagstaff, said this was in part caused by the pandemic, especially in Flagstaff, which fit a lot of what people were looking for in a “Zoom town.”

Some factors he listed as attractors for Zoom towns include four seasons, mountains and some distance from a major metro area — though still close enough for ease of access to additional services and shops. Flagstaff’s market is also “kind of a bargain” compared to other places with these characteristics (for example: Lake Tahoe, Montana or Colorado).

“We were kind of the perfect storm of that,” Moore said. People moved to the city from nearby states as well as from California and the coasts, and some Valley residents began looking at second homes.

Flagstaff’s 10-year housing plans states that, since 2011, the median sales price of house in the city for has risen 119%, in which time the Area Median Income (AMI) only increased 16%.

In the last quarter of 2021, National Association of Realtor’s data listed Coconino County as having a median home value of $436,369, an increase of 27.4% within the past year. Monthly mortgage payments for a 30-year mortgage averaged $1,673 in Coconino County, according to its affordability by county calculator, $405 higher than the previous year’s average of $1,268.

“Its a bummer to sit down with somebody and be like, hey, this is what we can do,” Moore said. “They meet with a lender, they’ve done everything right and they’re like, awesome, we qualify for a $250,000 mortgage. You’re like, that just doesn’t exist here.

“You’ve done everything you’re supposed to, you saved up for this, you have a solid job [and] you’re just stuck. …People have this misconception, I think that people don’t want to work or silly stuff like that. It’s just you have to have two or three jobs to make rent. It’s always funny to me: we sort of ignore housing issues but then be the first people to complain when we have to wait too long at a restaurant or the fire department doesn’t show up as quickly as they should. It’s frustrating to see the larger picture…there’s a big disconnect.”

Moore said housing affordability has been a problem in Flagstaff even before the pandemic hardened the market.

“If you’re thinking about Flagstaff, inventory is always an issue, just because we’re a finite resource,” he said. The city is surrounded by national forests, so adding houses to its outskirts isn’t an option when demand goes up, for example.

“[Inventory] is really what drove everything before,” Moore said of the past year’s market. “There were plenty of really good, viable buyers with all the things that they need: great income, good credit, down payment and all that. There just aren’t enough homes to look at. A new listing would pop up and then you would stand in line with your clients and there would be agents in front of you and then agents behind you. You’d take your turn to go look at the house and somebody was going to win [and] 12 of us were going to lose the bidding war.”

Moore said he’s often asked whether the current market is a bubble, similar to that seen before the 2008 recession. He doesn’t think so, as additional vetting means the current set of homebuyers are qualified. A main driver of the previous bubble was unqualified buyers using subprime loans.

“[In 2008, potential homebuyers] didn’t have to verify assets or credit history or employment history…that shows that you’re a solid credit risk and you’re capable of maintaining mortgage payments. So as soon as the markets softened, all these people couldn’t make a payment because they weren’t qualified,” he said. “…Today the mortgage process is much more rigorous than it was back in 2008 because, for good reason — there’s much more regulation and oversight on that segment of the market, so the people that get approved are viable, solid, stable buyers that aren’t getting in over their head or taking bad advice.

“…The people that want to buy are able to buy. The inventory is what’s causing the lack of supplies.”

He said rising prices meant fewer people have been looking to buy homes in Flagstaff lately.

“For the past 18 months, lots of people just had to stop looking because it got to the point where the property values, they couldn’t keep up with it,” Moore said. “A lot of people, they would start and then the prices of houses just went up so quickly…it just became unaffordable for so many.”

He said if the market continues to soften, it’s likely that those people will start looking to buy homes again.

“It’s one thing to have to stretch your comfort level if you’re talking about a payment or a down payment, but then it’s another thing when you’re having to stretch that and also having to compete against four or five other people who have to throw in a crazy bid that you’re not comfortable with and waive contingencies like appraisal contingencies and some of the things that we saw,” he said. “It’s a much different ballgame now, to a certain extent, especially in that mid- range, that $600,000 to $850,000 range, you might even be able to negotiate getting some things fixed. Whereas before, it was like, we’ll take the house as is, please choose our offer…[you] might have a little room to negotiate now on price or negotiate on repairs.”

Those people coming back to the market aren’t likely to create a new supply issue because that number will probably be lower than the total who were priced out in the first place. In the interim, some may have found other housing or will have decided to stay in their current home — or simply leave the area, as 58% of residents are said to be considering in Flagstaff’s 10-year housing plan.

He also said it’s still unclear how recent natural disasters like flooding and fires may have affected home buying in nearby neighborhoods. He did say that, even though Sunnyside especially saw extensive flooding last summer, “it seemed like most people looked past it” when considering home buying in the area. These neighborhoods also haven’t seen more new listings than other parts of Flagstaff.

It’s “really tough to say” where Flagstaff’s home market might be headed, Moore said, because so much is dependent on interest rates, which, while low, are rising.

“We saw such price appreciation over the past couple years but then when interest rates jump that much, it can be a several hundred dollar difference in payment for the exact same house from March to now. So a lot of people are just going to have to reassess and unfortunately are going to fall out of the market,” he said. “…I don’t expect it to be as booming as it was. I think this is going to stabilize. All of the forecasts we see are still price increases over the year, but at a much slower clip, with maybe a 5% increase instead of the crazy 25% that we saw over the past couple years.”

“[Housing] is the bedrock of everything that most people care about and I think oftentimes it gets overlooked,” he said. “To a certain extent, it’s [seen as] more of a privilege than something we should all be working for everybody to have. Because we all do benefit in one way or the other.

“The market [is] always cyclical, it waxes and wanes, but people are always going to need some place to live. Sometimes it seems daunting but trying to buy your own home is still just the ultimate goal.”

Moore said if you want to bridge the inequality gap in America, homeownership is the way to do it.

“If you want stability in your community, if you want a robust and vibrant, diverse community, it’s all related to stable housing. Homeownership is the way that you can get a leg up, build generational wealth,” he said. “I know that’s a daunting thing for many, many people in this town, so I don’t take it lightly, [but] that should still be the ultimate goal.”