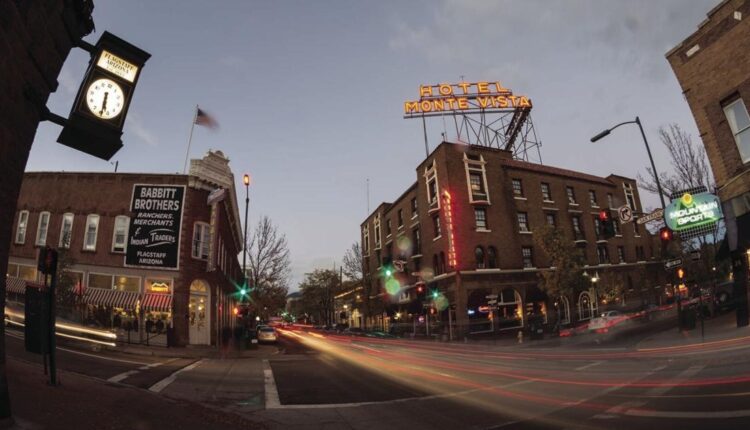 The year 2022 found the City of Flagstaff in the midst of growing pains, as the past 10 years have brought over 10,000 more residents to a city confined  by national forest — to say nothing of the nearly 6 million visitors who pass through annually.

Flagstaff felt the squeeze, and it endeavored to house and transport its people adequately. It hasn’t always been comfortable, but through the aches of development, the city has kept a keen eye on it growing future by incorporating sustainability goals focused on carbon neutrality and a healthy, thriving populace. Oh, yeah, and In-N-Out burgers, too.

Here are the top City of Flagstaff stories from 2022:

Minimum wage on the rise

The city announced in September that come Jan. 1 it will increase its minimum wage from $15.50 to $16.80 an hour, four dollars above the state wage of $12.80. The increase comes in accordance with the city’s Title 15, which was codified when voters approved Proposition 414 during the 2016 election cycle.

Per Title 15, the amount of annual wage increase in Flagstaff is determined by consumer price index data in order to adjust the city’s wage commensurately with inflation and cost of living. In 2022 inflation spiked significantly — about 8.3% as of August.

The change will have Flagstaff offering the fifth-highest minimum wage in the country, just behind Seattle and a handful of California Bay Area cities.

Labor advocates and supporters of Title 15 lauded the jump as proof that the law is working to keep Flagstaff citizens above the poverty line, even in the face of rampant inflation. Detractors, on the other hand, argued that the shift will put the burden on small businesses and make Flagstaff inhospitable to employers.

The Arizona Daily Sun will conduct a minimum wage “check-in” in January 2023 to see what impact the wage increase had had on employers and employees.

In 2020, Flagstaff declared a housing emergency based on the wide gap between the city’s average income and housing prices. At that time, despite having a population of which nearly 50% of residents were considered low income, Flagstaff’s housing costs were over 33% higher than the national average.

Research from the city’s housing section in 2022 showed that those numbers don’t look better, finding that the cost of housing continued to outpace wages. Since 2011, housing costs had increased 119% while wages had only gone up 16%.

It was also found that due to the widening gap roughly 60% of survey respondents reported they were seriously considering abandoning Flagstaff for greener pastures — if they hadn’t been “priced-out” already.

The research influenced the 10-year-housing plan, which was unanimously adopted by city council in February. It outlines a variety of strategies to address the housing emergency, including things such as subsidized rental assistance, new housing initiatives and legislation. Most notably, the plan introduced Proposition 442, which was approved in the midterm elections and authorized general obligation bonds that will provide $20 million in funding for housing opportunities throughout the city.


Priced out: The faces of Flagstaff’s housing crisis

As Flagstaff has welcomed in housing developments, it has had to grapple with unexpected costs that are more challenging to price than timber and concrete. With one downtown development, Flagstaff has been asked to trade its character and history for affordable housing.

The city took renewed interest in a five-story, 146-unit housing development from the Foundation for Senior Living (FSL) that intends to demolish The David Babbitt House. The former home of one of Flagstaff’s founding families is also significant for its rare architecture and inclusion on the National Register of Historic Places. But despite protestation and citizen initiatives to preserve the irreplaceable piece of Flagstaff’s downtown, FSL has declared the property impossible to save — leaving some citizens outraged.

Reportedly, there will be some effort to relocate and preserve elements of the home, but the details of the proposal remain undisclosed.

In May, it came to light that rising construction costs had delayed the FSL project for an indeterminate amount of time. The Arizona Daily Sun will keep tabs on this project in 2023.

Throughout 2022 the city has looked to update and transform its transportation system in ways that meet demand, support carbon neutrality goals and empower residents to choose options other than personal vehicles. Along the way, city leadership has looked to “Big Shift” policies to guide decision making.

While the Big Shift colored many conversations around Flagstaff transportation projects in 2022, it made concrete policy impacts in October when city council adopted a set of programs and policy adjustments that opened the door to new ways of planning and measuring traffic management in the city.

Council took it a step further in November by adopting the Active Transportation Master Plan (ATMP), which had been in the works since 2014.

Beginning in 2023, the plan will take advantage of existing funds to implement infrastructure improvements geared toward pedestrian and cycling improvements.

The city made some progress on the Lone Tree Overpass project in 2022, particularly in the realm of design. Intended to alleviate traffic congestion by increasing street connectivity and providing a new railroad crossing, this $100 million project was approved by voters via a 2018 proposition and has been moving forward slowly since.

In May, the city completed an economic impact study that reported the overpass would reduce traffic, and potentially spending, in Flagstaff’s Southside. The reports, however, were tempered by considerations that a reduction in vehicle traffic could make impacted areas more attractive to pedestrian traffic that would be expected to balance out the economic impact.

The city also hosted a series of public roundtables to discuss the project—which will carry on well into 2023.

Like the Lone Tree Overpass, the Fourth Street/Lockett Road roundabout project drew substantial public attention in 2022. The project would see the construction of a roundabout at an existing (and problematic) intersection in Flagstaff’s eastside.

As the project moved through its design phase, area residents voiced concerns that the proposed roundabout did not adequately account for the safety of the numerous pedestrian children using the intersection, despite expert analysis from city traffic safety engineers that reported the contrary.

It will likely see the beginning phases of construction in 2023.

Over the course of the year, the city and Flagstaff public put large amounts of time and effort to determine a community-minded design for the development of a 9-acre parcel in Thorpe Park. Through community building sessions, a slew of desired amenities emerged — from pickleball courts to pollinator gardens — but public support mostly rallied around the construction of an Indigenous Community and Cultural Center.

The proposed center became, well, the center for the remainder of the design and informed decisions to eliminate other proposed amenities that would crowd out or clash with the center’s purpose. The Indigenous community came out in force to support the project direction, while also reminding the public that the center would be meant for the enrichment of everyone.

Nonetheless, lingering tensions about traffic, noise, and other residential concerns have put the park design through numerous tweaks and stages, the latest of which removed housing and adjusted the placement of a skate park amenity.

Moving into 2023, the project awaits final design, funding and potentially the beginnings of construction.

This year was a hard one for residents of the “luxury” apartment complex known as Elara at the Sawmill. Slated to open for habitation in August, the new development was unable to meet the timeline despite having already sold hundreds of leases, and it had to pivot to provide would-be residents with alternate lodging until late October.

As residents began to move into the development, the Arizona Daily Sun received outreach that reported the interior of Elara was not up to par. Residents complained about unfinished rooms, plumbing leaks, mold, and a laissez faire management that approached serious health and safety complaints with a lax attitude.

The article on Elara spurred public conversation about truth in advertising, the obligations of developers to their tenants and the perceived trend of negligence among other, similar high-capacity developments in the city.

Flagstaff’s Continental Country Club narrowly charted a course to emerge from bankruptcy in 2022. Embroiled in an ongoing (and bank-breaking) lawsuit surrounding the fate of man-made Lake Elaine, in July Continental distributed a ballot that would increase residential membership dues and help fund a settlement.

This ballot reignited old arguments about Lake Elaine, with Continental management arguing that the lake was no longer feasible to maintain and suing residents claiming that they were legally obliged to do so.

The Arizona Daily Sun took a deep dive into the positions of both Continental and the suing residents ahead of the vote. In August, the ballot passed, giving Continental the capital it needed to stay afloat as it continues to navigate the fate of Lake Elaine.


How a man-made lake sunk Continental Country Club into bankruptcy


Deeper into Lake Elaine: Residents contend lake is not to blame for country club’s bankruptcy

One of the biggest, strangest local news stories of 2022 was the filing of county paperwork that confirmed the intention to build an often fabled and hotly desired In-N-Out Burger on Milton Road.

The news reverberated through the community with a mix of celebration and groaning exhaustion. While some diehards drooled over the prospect of their favorite burger close to home, others raised concerns about the pragmatism of placing a high-volume drive-thru restaurant on a street already plagued by traffic congestion.

In-N-Out representatives were also unable to provide a definitive timeline for the restaurant’s construction — causing some to bemoan the news as yet another false alarm for the what is perhaps the most desired new business in Flagstaff.

Editor Chris Etling took this video of the annual Fourth of July parade on Monday as the Daily Sun’s float worked its way through downtown Flagstaff.

Hating ourselves into paralysis