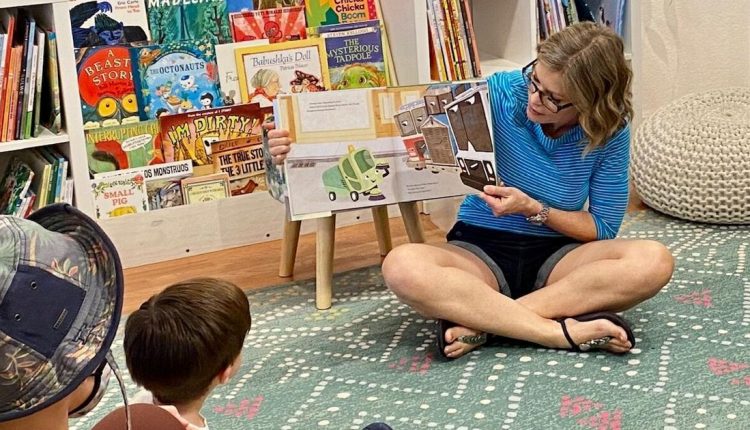 The standard picture book for children has 32 pages, fewer than 400 words, short sentences and a simple, straightforward plot.

Writing one should be child’s play, right?

“Well, you can’t believe how hard it can be to make a book look simple,” Lori Alexander says with a laugh, and she should know.

Her ninth book, “Mini Mighty Sweeps,” was released this month by HarperCollins. Title No. 10, a board book called “You Are Getting Sleepy,” will be available from Scholastic next month.

Ten books, none as simple as they looked.

“It’s not rocket science, but there are pretty strict requirements, structurewise,” Alexander said. “There are mechanics that need to be in place. Every word counts. I need to make sure there are enough picture opportunities, interesting page turns, a little humor, a little suspense. There was a lot to learn.”

Her focus from the start was writing for children.

“When the kids were small, it seemed like we spent our entire life at playgrounds and libraries,” Alexander said. “We loved the Oro Valley Library, especially the picture books. They were beautifully illustrated, they were fun, they were funny. … They became these little gems that brightened up our days. Even then, I started wondering if I could write one. So later, when I had more time, I began digging around on the internet to learn how everything worked.”

One of the things she learned: A majority of picture book authors are writers, not illustrators. If a publisher likes a story, the publisher will contract an artist to provide the visuals.

“That was big for me,” Alexander said. “I’m not an illustrator, not even close. It was freeing to learn I didn’t have to be.”

Eventually, she began writing a little. And bouncing her text off other writers. And listening to their suggestions about her work.

“It’s really hard to know when your story is done, when it’s ready to submit,” Alexander said. “I was lucky. I found some critique buddies online that I’ve worked with ever since. They’re some of the best author friends I have, and I’ve never even met them!”

She got some help at home, too. Her first book, published in 2012, was “Backhoe Joe.” It grew from her young son’s love of trucks.

“A Sporting Chance,” a story about the Paralympics, touched a topic close to the heart of her daughter.

“All in a Drop” stemmed from a conversation with her scientist husband, Nelson, about microscopes and imaging.

“I don’t know what I’m going to do when my young editorial assistants leave home,” Alexander said, smiling. “Honestly, they were usually more interested in the illustrations than the words I wrote. They loved seeing what came back from the illustrators. But I can definitely hear them in my books.”

Case in point: While working on “Backhoe Joe,” Alexander’s editor suggested the backhoe should have treads. Her son, then 5, put his foot down.

“My son knew that backhoes with treads don’t go on the street. They only go in the dirt. I had to tell my editor, ‘No, my son says no treads!’”

One of Alexander’s gifts is her dexterity within the genre. Five of her projects have been board books. Three are fictional picture books, two are nonfiction chapter books. She has four more books under contract and in the pipeline.

Spoiler alert: Look for more nonfiction. In 2019, the New York City Public Library listed “All in a Drop” as one of the 100 top children’s books of the year, and parents these days definitely have STEM education on the brain.

One thing is for sure. Alexander wants to find ways to stay busy. In addition to writing various kinds of books for a variety of young audiences, she spent the summer as the writer in residence for the Pima County Public Library. During the coming school year, she will be visiting schools and reading to children through Literacy Connects’ Reading Seed Program.

Readers of this space may be interested to learn Bookmarks has organized a community book drive to help Salpointe Catholic High School replenish an English Department library that was destroyed in a fire July 17. Several hundred books were lost, including about 100 that were on various book lists for the coming school year.

This “Together Tucson Book Drive” is inviting gifts of contemporary classics. Salpointe’s wish list can be found at tucne.ws/1l7e but all significant, contemporary novels are welcome. They may be new or used, hardback or paperback.

This independent community book drive will run through Sept. 12.

It’s official: The next Tucson Festival of Books will be held March 4-5 at the University of Arizona. Planners promise an all-in event on par with the record-breaking festival held in 2019 — which included 345 authors and attracted 140,000 to the UA campus.

With classes resuming last week, the UA Bookstore has returned to its normal hours. The store will be open from 10 am to 5 pm on Saturdays and 11 am to 4 pm on Sundays.