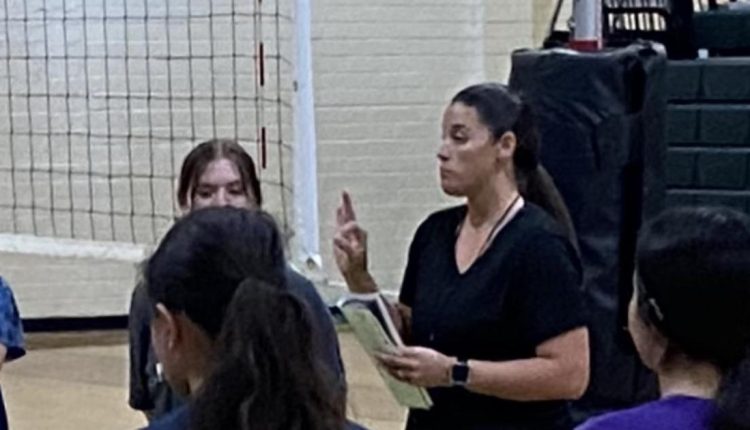 Anissa Edouard has brought a credible turnaround to Phoenix Christian.

In her first year as The Cougars’ varsity head coach, Edouard led them to an 8-5 record, second place at 8-2 in the 2A Central region behind Northland Prep (13-5 overall, 10-0 region), and ranked 24th in the 2A conference.

Last season, the Cougars went 6-11 and missed the playoffs.

Edouard was introduced to the opportunity to become their head coach by her husband Jeffrey Edouard, who’s a Phoenix Christian alumnus and its Director of International Programs.

“There’s a certain energy that this campus has and it just drew me in,” Edouard said. “I made the commitment to be here and I’m happy to be here, coaching and giving back.”

In her first practice, Edouard explained to the team what her expectation was for the rest of the season.

“I was very clear with expectations, in terms of practices, games, positions, playing time,” Edouard said.

Edouard understood the importance of the seniors and met individually with them to establish a good relationship. She also wanted to understand their passion and goals.

“As a new coach coming into their senior year, they have expectations themselves of what they would like to see for themselves and the team for the season,” Edouard said. “When you really start to meet with them you start to learn a little more about who they are, what their ‘why’ is.”

Senior setter Nancy Felix recalled her first impression of Edouard and how kind she was.

“She was really nice,” Felix said. “I knew that she came here to coach and she wanted us to win.”

Felix also mentioned how Edouard’s practices are different from years prior, and how they’ve allowed the team to be successful.

Senior Brooklynne Blake emphasized Edouard’s uplifting mentality during games, especially during timeouts, and how that impacts the team.

“She just really focuses on encouraging us during timeouts, because volleyball can be hard sometimes, and she tries to have a positive atmosphere,” Blake said.

Edouard has enjoyed seeing the players develop, both on and off the court.

“The thing I’ve enjoyed the most is seeing the girls develop and grow: physically, mentally, and spiritually,” Edouard said. “The continued commitment to themselves and each other to get better really makes a difference and it reminds them why they’re here.”

She is hopeful that her teachings and inspiration will help them after they graduate and as they continue through life.

The Cougars’ next game is a road matchup at the Northland Prep Spartans on Oct. 24, then finish the regular season at home against Highland Prep on Oct. 27. The Cougars will likely need to win both games to make the playoffs through the preliminary conference play-in tournament on Nov. 1.