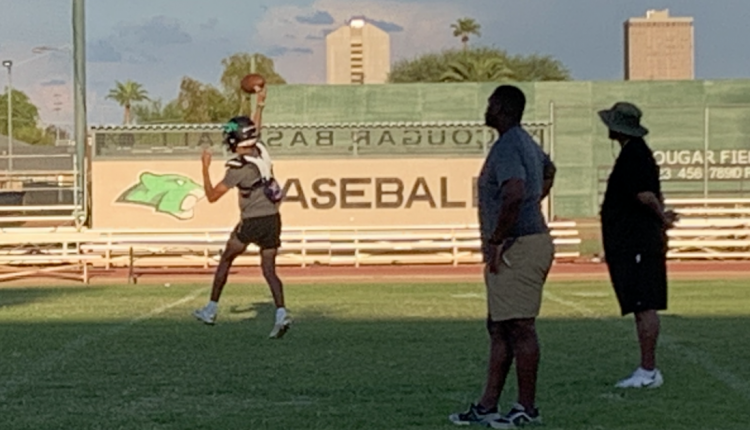 How Phoenix Christian could upset Valley Christian on the road

The Cougars have averaged 17 points per game and have allowed 38 from their opponents.

Phoenix Christian’s closest game was their 27-20 season-opening home loss against the Safford Bulldogs, but the Cougars weren’t as competitive in their next three games. They were routed 41-20, 46-6, and 40-21 by Shadow Mountain, River Valley, and Gilbert Christian, respectively.

As the Cougars try to remain positive, they’re looking to their star players to have bigtime production against the Trojans.

Phoenix Christian senior wide receiver Angel Gutierrez has 27 receptions for 380 yards, averaging 95 yards per game, and five touchdowns. Gutierrez is also a defensive back with 14 tackles, one tackle for loss, one interception, and a blocked field goal.

While Gutierrez is the main focus, head coach Dan Fort mentioned many other great players who needs to step up to get their first road win.

“Number one Angel. He’s a senior. He plays almost every down of every snap of every different play,” Fort said. “Our quarterback Xavier Sandoval has done a good job this year, but we’ve got to keep him upright, and we gotta give him time to make decisions. “

Sandoval has thrown for 802 yards and eight touchdowns.

However, he’s been intercepted nine times. Gutierrez talked about how Sandoval can improve by forgetting the bad plays and moving forward to the next.

“I think my favorite thing with ‘X’ is our relationship, our brotherhood,” Gutierrez said. “I know I’m able to trust him to give me the ball, and he knows that when the ball is in my area, I’m able to come down with it.”

The Cougars’ WR coach Marvin Sumpter addressed what is expected of their receivers.

“It starts in practice, and all receivers are prepared to make plays, run the routes, and make the catches when they are called upon,” Sumpter said.

In addition to spreading the ball around, Sumpter emphasized the offense will mostly target Gutierrez as their first option and occasionally their other receivers when necessary against Valley Christian.

Their struggles stem from their lack of athleticism.

“We got to get faster as a team,” Fort said. “The things that hurt us last year and this year are having teams with a couple of guys that can just burn, and so we’ve got to improve our team speed to be able to compete at the 3A level.”

Despite Phoenix Christian’s struggles, Fort has noticed multiple qualities about his team.

“The positive of this team is that they listen, they want to get better, they want to work, so because of that, it’s a kind of a joy to coach these guys,” Fort said. “They’re willing to do whatever we ask.”