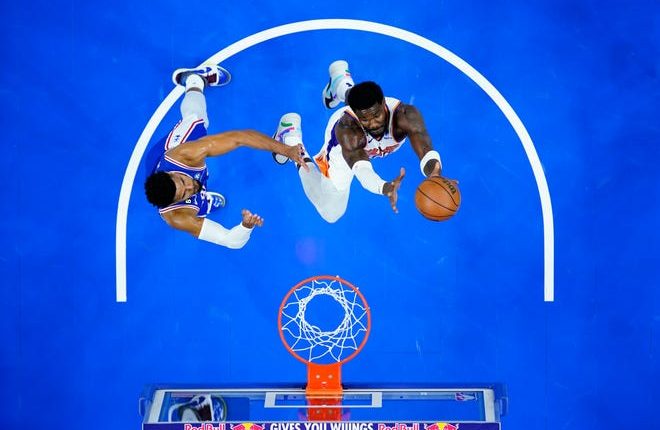 How Phoenix Suns big Deandre Ayton can get to the line?

MIAMI – Deandre Ayton can fix this free throw issue with one, simple goal — get to the line once a quarter.

That’d put him at eight free throw attempts a game. Right now, he’s at 2.5 attempts for his career and career-low 1.9 this season for Phoenix (8-4).

The Suns big didn’t even get to the line in Friday’s loss at Orlando. His head coach, Monty Williams, put a spotlight on it following that 114-97 defeat.

“DA doesn’t get the benefit of some of the contact,” Williams said. “If a guy is driving to the basket and you hit him the way that he’s getting hit around the basket, backing people down or fighting for position, I think you probably get the free throw line a bit more, but it’s a totally different world for the guys who are posting up. You can pretty much beat him up down there.”

Ayton finished with 14 points and five rebounds Friday. He didn’t take advantage of the switches that left smaller defenders guarding him, but playing against size like Wendell Carter Jr., Bol Bol and Mo Bamba should’ve led to free throw opportunities for Ayton.

“He has to be more demonstrative down there for sure, but he’s taking a beating down there,” Williams said.

Ayton said he has to adjust to how each game is being played, but didn’t sound too frustrated when discussing the situation.

“I’ve been in situations where sometimes the refs don’t see what I’m seeing,” Ayton said. “It’s hard to just complain because the game keeps going. I’m not really someone who gets calls or live at the line. So I’ve got to get back (on defense). Sometimes it does get to me, but other than that, I don’t let it bother me or affect me at all. Just try to keep my energy super high so my teammates can hear me on the defensive end.”

So how can Ayton get the line starting Monday night at Miami against Bam Adebayo and the Heat (6-7)?

Ayton started the season using a dribble across the lane for a shot that usually leads to contact because the defender had to body him to prevent a power dunk.

He has seldom gone to that since. Ayton can go to that move more.

Second, Ayton can turn and face up, put that wide, muscular shoulder into the defender on two power dribbles and go up for the jump hook. He likes to dribble one way and fade away with a jumper.

Getting to the line is all about drawing contact. It’s a mindset and must be done intentionally and with intentions to win the 48-minute battle. If a big doesn’t approach it that way, he’ll hardly get the call.

Bigs tend to do that with pump fakes and up-and-under moves, also.. Ayton rarely uses either. He could use some of that in his game.

Trying to dunk on someone usually leads to a foul, but if he does it on a smaller defender, that often results in a charge. So being able to feel with his body on not only how he’s being defended on the post, or by who can help him determine what to do.

Bigger defender, go around or try to muscle to draw contact.

Smaller one, over the top.

Finally, Ayton does pass out of the post pretty good for open 3s, but there are times he can go for his because it can lead to not only a basket, but a foul on the other team and a 3-point play.

Now it’s not all on him.

The Suns do run plays for him, but they can run more. He can post up and there’s no double, look to score. If double comes, kick back out, repost even deeper, get the ball back and ka-boom, dunk.

Listen, big men are like receivers in the NFL. Someone must throw them the ball to score.

Nothing excites a quarterback more than when the receiver grabs one of his passes out of the air and makes a big play. In the NBA, that’s a lob dunk, power finish or a good shot, make or miss.

So if Chris Paul or Devin Booker feeds Ayton and he faces up and scores on someone, particularly with a dunk, that not only energizes the passer, but the entire team.

Now everyone wants to feed him.

More touches, more attempts, more opportunities to draw fouls and get to the line.

That’s what Giannis Antetokounmpo does. That’s what Joel Embiid does.

So that’s what Ayton can do.