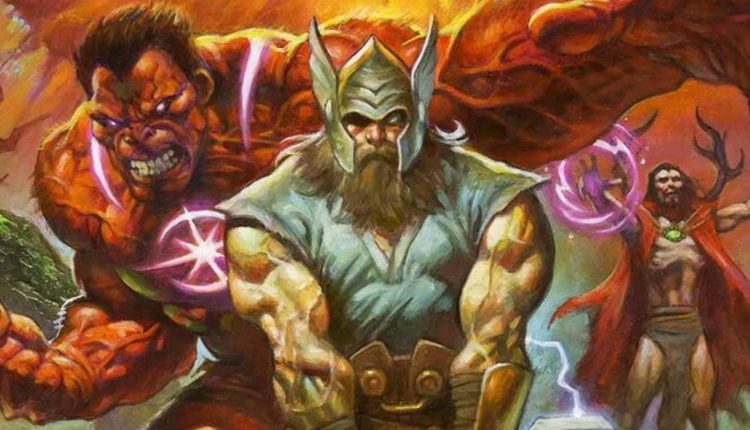 The life of a god in the Marvel Universe is never a simple one, yet the divine denizens of Asgard have long made a name for themselves as having some of the most convoluted relationships of any pantheon or realm. And, more so than any other Asgardian, it is the God of Thunder who most acutely understands how innately complicated his place in the universe truly is. And yet, Thor seems to only be capable of uncovering agonizing new threads he was somehow never aware of. Thankfully, there is some closure to be offered when it comes to Thor’s impossible lineage as the circumstances that led the Phoenix Force to become his second mother have finally been revealed.

The ancient past of Avengers 1,000,000 BC #1 (by Jason Aaron, Kev Walker, Dean White, and VC’s Cory Petit), much like the Marvel Universe of today, was fraught with terror and tragedy. In spite of all its splendor, this was also the case in Asgard, when the Frost Giant King Rundey launched a vicious assault on Odin and Gaea’s then newborn son Thor. With a single blow, the infant god was frozen to his very core, seemingly without any hope of salvation. Luckily, another impossibly powerful being heard Gaea’s cries and felt Thor’s pain. The Phoenix Force had her own painful history as a former lover spurned by Odin but she answered without any hesitation. With her cosmic flames, the first Phoenix breathed a literal new life into the God of Thunder, and that moment of heartbreaking mercy has haunted both of them ever since.

RELATED: Black Panther is Finally All Alone in the Marvel Universe

The idea that the Phoenix Force could in some way be Thor’s mother has been the source of near unbearable stress for the God of Thunder ever since the subject was first broached in 2021’s Avengers #42 by Jason Aaron and Luca Maresca. Not long after its most recent trek to Earth, the Phoenix Force attempted to explain to Thor how Odin and Gaea had lied to him about his lineage. While this was more than enough to leave Thor filled with doubt, that quickly spiraled into the crippling uncertainty which left him unable to wield Mjolnir with any real sense of control.

Though it wasn’t the Phoenix’s fault alone that Mjolnir sprung a life of its own before setting out to destroy everything Odin had created, the truth coming out was still the point where Thor’s road toward battling Mjolnir began. It was also the penultimate of Odin’s lies before his final sacrifice left him imbued within Mjolnir. Of course, Thor already had plenty of experience dealing with his father’s constant secrets and the eventual fallout of them, but the fact that Gaea had kept something from him for so long was almost more than he could handle.

RELATED: Captain America’s Legacy is Under Attack in the Most Horrifying Way

Thor had already been misled about his mother’s identity by Odin and Gaea once before, with the God of Thunder spending centuries under the impression that it was Freyja who had given birth to him. Even still, their reasons for keeping the truth from him were benevolent enough that Thor could look past that deception after coming to terms with it. On the other hand, Thor’s exceptionally complicated relationship with the Phoenix, not to mention Odin’s disastrous romance with her, are both considerably unsettling matters, which it made sense to keep from the young god early on. Now that he has come into his own, however, nothing but the truth could possibly help.

With any luck, everything that has been uncovered will only lead to a better future for everyone involved. For the Phoenix, it might be the opportunity for genuine catharsis that she has been denied at every single turn along the way, while for Thor it could be a chance to set down his hammer in favor of something a little more spectacular. Assuming the fires of the Phoenix are still burning within him somewhere, they would open a whole new world of power to Thor should he manage to find them for himself. With a little help from the Phoenix of today, he may even be able to become the kind of All-Father that Asgard has never seen, yet always needed.