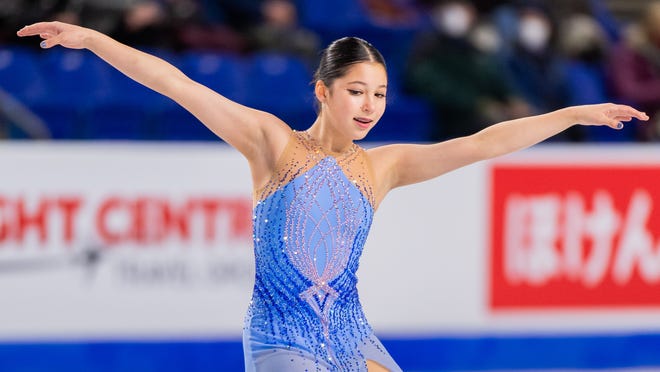 How to see Olympic figure skaters

Fans around the world watched top figure skaters perform intricate solo and pair routines at the Winter Olympics in Beijing in February. These skaters highlighted the artistry and athleticism of US figure skating.

Skaters from the 2022 US Olympic team will perform for local audiences on Friday, May 20, when the Stars on Ice tour comes to Gila River Arena in Glendale.

Stars on Ice is returning to metro Phoenix after a two-year hiatus due to the pandemic. Olympic medal winners and top performers at the World and US figure skating championships will perform individual, pairs and group routines.

Skaters include Nathan Chen, a two-time Olympian who has won gold, silver and bronze medals and has been world champion three times.

Knierim and Frazier won silver medals in the team event at the Beijing Olympics, and in 2022 they became the first US pairs team since 1979 to win gold at the World Championships.

Frazier was born in Phoenix and grew up in Colorado; Knierim is from Illinois. He started figure skating at age 11 after roller skating for a number of years, and she began her figure skating career at age 7.

Although they had known each other for many years, they had never worked as a pairs team until 2020. Knierim says they shared a similar work ethic.

“Because we had that natural connection, it made the process of learning our tricks more enjoyable and easy,” Knierim says.

Frazier says their lifetime of training helped them to be able to compete together quickly at a high level.

“All of our experience with our former partners prepared us for that opportunity when we teamed up, to be ready to go at a faster pace,” Frazier says.

Knierim says each pairs team has a different dynamic and style. She and Frazier had to develop their own.

“There’s a lot of different pair elements that we have to execute in competition. Every pairs team has their own technique and recipe for success in how they compete,” Knierim says.

“Brandon and I had very different styles on some elements, so it took us a lot of communicating and compromising to make our own recipe for what works for the two of us together.”

Along with performing a modified version of their free program from the Olympics, Knierim and Frazier will bring a new Latin-inspired number created for Stars on Ice. Frazier says the show lets pairs perform to different styles of music, in a way that speaks to different audiences.

“There is music that is good for competition and then there’s music that’s good for a show. It’s for different audiences in that aspect,” Frazier says.

“Our competition number works well for the show, and the other one we picked before coming to Stars on Ice was a fun piece that we listened to and enjoyed for the ice. Alexa was the one that discovered it, and when I listened too, I thought it was very playful for the audience.”

For the modified version of their competitive routine, the two have kept many challenging elements and added new lifts and throws.

Knierim says performing in Stars on Ice is different from competitive skating because of the crowd engagement.

“One of my favorite things about figure skating is the performance side of things. I love to just have fun with it and emote. In competition, you are so focused on the technical elements when executing. You can only perform to the audience so much Because of the way figure skating competition programs are designed,” Knierim says.

“But in shows, you can play with the audience. You can play with your partner. You can just really enjoy whatever character you are trying to be for that program. Skating in spotlights is something you don’t do in competition, so that’s fun to experience.”

Frazier and Knierim also will perform in group numbers to music from Elton John, the Weeknd, AC/DC and Jon Batiste. To prepare for the group numbers, all the skaters in the show spent three intensive days together.

“There were 12-hour days on the ice, just learning four numbers as fast as you can, trying to gel and keep formation, be in unison and be ready to perform them on Day Four. So, a lot of time, preparation and rehearsal went into it, but it’s really exciting all of the Olympic team members skating together,” Knierim says.

Admission: Tickets start at $25 plus fees. Mobile ticketing only and prepaid parking required.