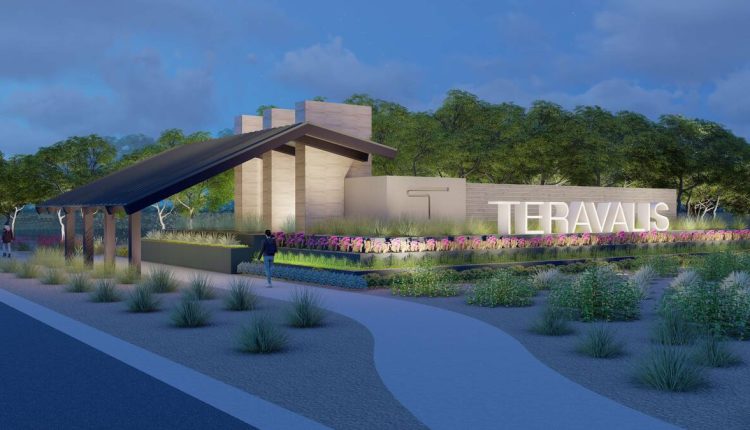 Summerlin developer Howard Hughes Corp. broke ground on a massive new community in the Phoenix area, saying it will be Arizona’s largest such project.

Hughes Corp. said Monday that it started construction on Teravalis, a 37,000-acre master-planned community west of Phoenix. It’s slated to include 100,000 homes and 55 million square feet of commercial development.

Last year, the developer said it acquired the land for the community, previously known as Douglas Ranch, for around $600 million. At the time, Hughes Corp. CEO David O’Reilly described the community’s full build-out as a “50-plus year development pipeline.”

Teravalis will be Arizona’s largest master-planned community, according to the developer. It will also be significantly larger than Summerlin, which spans 22,500 acres along the Las Vegas Valley’s western rim.

Arizona’s growing population has increased demand for housing, and Hughes Corp. “is answering that call with this impressive community,” Arizona Gov. Doug Ducey said in a news release Monday.

Heath Melton, Phoenix regional president for Hughes Corp., said in the release that Teravalis is “firmly grounded in deep respect for its Sonoran Desert setting” and “designed as an authentic extension of the Phoenix West Valley’s natural landscape — a place of extraordinary beauty .”

Texas-based Hughes Corp. indicated it plans to announce Teravalis’ homebuilders later this year, with a grand opening set for late 2024.

In Southern Nevada, Hughes Corp. sells land to homebuilders in the Summerlin community, which commands some of the highest home and land prices in the Las Vegas area and boasts a network of parks, trails and community centers.

At the end of last year, Summerlin had around 120,000 residents and more than 2,500 acres of residential land that the developer could still sell, according to a securities filing.

Hughes Corp. has also developed hundreds of millions of dollars’ worth of projects in Summerlin’s commercial core off Sahara Avenue and the 215 Beltway, bringing retail shops, office buildings, apartments and a baseball field. Among other things, it owns the Las Vegas Aviators minor league team and its stadium, which sits across from the 106-acre Downtown Summerlin mall that Hughes Corp. developed.

A few weeks ago, the company announced that it also broke ground on a pair of three-story office buildings near the intersection of Flamingo Road and Hualapai Way.

The buildings will each span 73,500 square feet and be connected by a first floor lobby. They will be next to slot machine manufacturer Aristocrat Gaming’s corporate campus, which Hughes Corp. also developed.