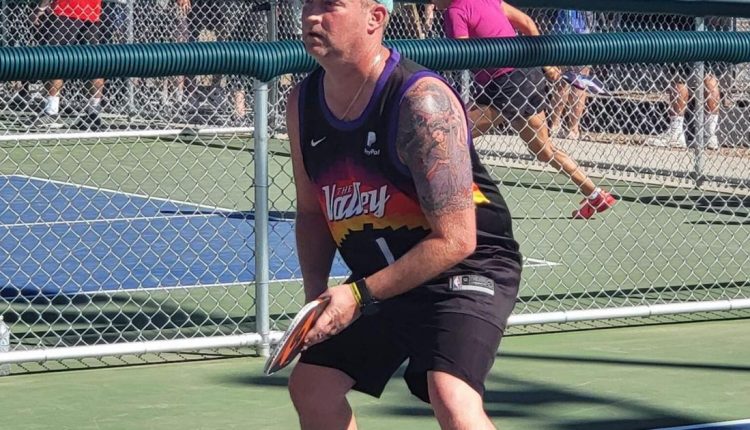 Hoyt is ‘the mayor of pickleball’ in Flagstaff | Local

“The nicest guy you’ll ever meet.”

There’s a lot of titles given to CJ Hoyt, one of the most standout pickleball players in Flagstaff, but none more meaningful than “a true pickleball ambassador.”

Hoyt, a pickleball instructor at both Flagstaff Ranch Golf Club and Forest Highlands Golf Club, is becoming one of the most popular and most beloved names among the local pickleball community, and is helping popularizing the sport around the area.

Pickleball is still finding its place in Flagstaff. There’s only two paved public pickleball locations in town, and it wasn’t until recently that there was any competition at all.

But along came Hoyt, who began playing about seven years ago and quickly found comfort in the game’s close-knit community. Hoyt recognized the potential that the tennis-like sport had. In 2019, he helped create a pickleball program at Flagstaff Ranch.

“I approached the general manager, and I was like, ‘Man, pickleball is coming.’ I asked if he would be interested in helping me start a program, and he said he wanted to,” Hoyt said. “So we taped down some lines on the tennis court and we were rolling.”

Hoyt said the sport grew so quickly at the club that the managers decided to take down one of the tennis courts and replace it with four pickleball courts.

Hoyt knew the sport would become popular because it was not only a fun, social game, but it was open to all players. It had the potential to become great because of its outreach.

“When you see how well it translates to all ages, all genders, and a lot of different athletic abilities, you know it has a huge future,” Hoyt said.

In June, Hoyt organized the first ever pickleball tournament to take place in Flagstaff. It was a two-day tournament held at Northern Arizona University’s outdoor tennis courts. Hoyt said he hoped for 100 participants to sign up, and 185 ended up showing.

The number of participants proved to Hoyt the outreach that the sport had, as competitors from Flagstaff, Phoenix, Washington and even Canada signed up for the competition.

Hoyt knew almost every single person that was there. A bystander could often find Hoyt running up to a player and giving them a high-five and a hug as he welcomed them to the tournament.

There were participants who would walk up behind Hoyt seemingly out of nowhere and yell, “There he is,” as they would give him a big bear hug. “So good to see you,” they would exclaim.

Everybody was welcome, whether they were a player or a fan. Hoyt was just happy people who were able to spend part of their day at his tournament.

Hoyt helped create a friendly atmosphere that was a large reason for the tournament having such a large outreach.

“At this tournament, you’ll see everything from a 12-year-old all the way up to a 70-year-old,” Hoyt said. “Playing out here is incredible because you meet the nicest people and see them in a healthy, fun environment.”

Hoyt’s plan was to keep the tournament lighthearted and upbeat while promoting players to be friendly yet competitive. Often he would get up to the microphone and say something like, “Rockin’ and rollin’ at the Flagstaff Open,” or, “We’re all here to make pickleball happen in the pines.”

There was a rainstorm that came out of the blue during one of the days of competition, but Hoyt and the other players never let the storm ruin the fun. They simply packed up the nets, brought the paddles and balls inside, and resumed the tournament indoors.

At the end of the tournament, more than 20 participants received medals for their wins. The others walked away with experience and a happy feeling for having had an excellent time. Ask Hoyt about the tournament’s success, and he’ll humbly say it was his desire for everyone to have a good time.

The significance of the tournament was not only that it was successful, though. It proved that pickleball could have a bright future in Flagstaff, especially when a guy like Hoyt is helping get the sport on track.

Hoyt teaches lessons almost every day on the basics of the sport and has promoted players to go to Bushmaster Park every weekday morning to play on the makeshift courts. He’s also lobbying for the City of Flagstaff to build new courts at Thorpe Park, a plan that has been discussed by city officials.

Hoyt isn’t the only one advocating for pickleball in the pines. The Flagstaff Pickleball Association, headed by Jen Kottra, is another organization that is helping locals to start playing.

Patrick Sullivan Jr., who’s been playing since 2018, describes Hoyt as “the mayor of pickleball in Flagstaff” for his efforts to popularize the sport.

“He organizes games all over the city. He’ll greet anybody that walks onto the court, even if it’s for the first time, and say hello and ask if they need some help with the rules or if they just want to hit around,” Sullivan said. “He’s a fantastic director and ambassador for the sport.”

Lori Anne Harrison, a realtor for Zion Realty who sponsored and helped organize the event, said she thinks the world of Hoyt. She said his kindness and passion for pickleball makes others want to join.

“As a coach, he adapts for each of his players and gives feedback to help them,” Harrison said. “He’s kind, generous, and a good human all the way around. I’m really thankful that pickleball introduced us, and I think everybody else feels that way.”

Derek Nannen and Amy Ricciardi, players since 2018, asked, “Does anybody not like (Hoyt)? He’s like the nicest.”

They described him as someone who is “welcoming to everyone, always smiling, and a great ambassador to grow pickleball.”

For as amiable as Hoyt is, he’s also a well-versed coach. Hoyt says his favorite part of playing is the “yin and yang” of pickleball — how a game could spontaneously switch from a slow-paced, methodical rally to a quick, hard-hitting affair.

“During a point, you can go from having to hit the most gentle, delicate shot into the kitchen in one second, and the next second you’re getting a ball slammed at you as hard as you could imagine,” Hoyt said. “It’s a never-ending puzzle to solve, kind of like chess on a 40-foot board. I just enjoy every minute of it.”

“Flagstaff definitely has a lot to thank Hoyt for,” said Autumn McLeod, a player of nine years who’s ranked high in the state. “He’s very active in different clubs and locations around town, and he’s helping spread awareness and getting everything going for Flagstaff, so he’s awesome.”

Hoyt said one of his biggest motivations is his family, who always supports him and his projects. Hoyt, a father of two, said some of his favorite moments as both a father and a player have come when his daughter or son help him with his pickleball games.

“Seeing them enjoy the game and come out hitting the ball is simply awesome,” Hoyt said.

So what’s next for Hoyt? First up on Hoyt’s agenda is to schedule another pickleball tournament for the month of December. He also wants to make the June tournament a yearly occurrence. He wants to continue organizing tournaments for players to join and grow their experiences.

Hoyt said the money made from the June tournament will be put toward buying kid-sized paddles and getting a youth pickleball program up and running. It’s a fantastic way of getting pickleball popularized in town.

“I hope that I can help build the community and help spread the pickleball love to more people,” Hoyt said. “I would really love to put this incredible town on display through a really fun sport.”

Mental health, substance use and homelessness

Are court reporters a thing of the past? Coconino County Superior Court only has one…