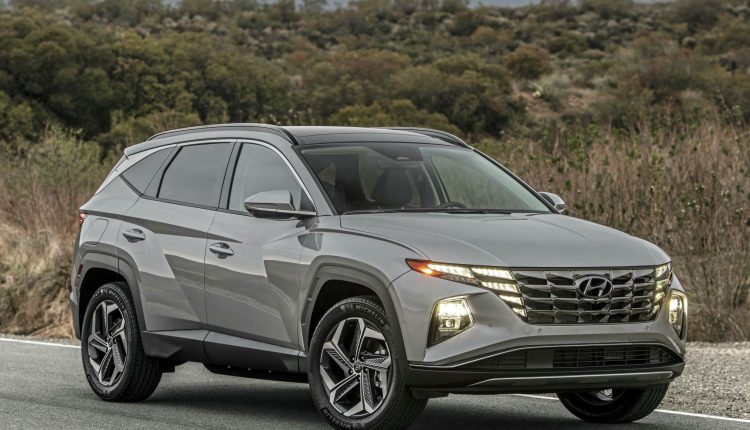 With the redesign of its compact, five-passenger Tucson crossover for 2022, Hyundai has added a plug-in hybrid version, also called a PHEV, which takes the regular Tucson hybrid model a step further.
That means that along with recharging its own battery as it drives around on gasoline power, as the regular hybrid does, the Tucson PHEV version has an external power connection that allows its battery to be rechanged from an outside source.
Hyundai says that gives it a battery-only driving range of up to 33 miles, and that means if your daily driving routine runs somewhat under that, you might be able to go without buying gasoline for long periods.
The official EPA fuel economy ratings give the 2022 Tucson Limited PHEV (2022 base price $42,700; 2023 price $44,310, plus $1,295 freight) that we tested a combined city/highway rating of 80 mpg, and says that’s based on a recharging time of 1.7 hours , using a 240-volt power source.
Running on gasoline only, using the vehicle like a standard hybrid without external recharging, the EPA rating for this model is 35 mpg combined city/highway.

That compares with the 37 mpg combined city/highway rating of the Tucson Limited Hybrid (2023 base price $38,660).
For 2023, the base Tucson PHEV SEL model starts at $37,050, while the regular hybrid’s entry-level BLUE model begins at $30,900, and the midlevel SEL Convenience version starts at $33,860.
All of the hybrid and plug-in hybrid models come standard with all-wheel drive.
As for the Tucson in general, the 2022 makeover brought a sleek new exterior design based on the company’s “Sensuous Sportiness” global design theme.
Along with that came more passenger space and additional cargo capacity.
The re-do made the Tucson six inches longer than the previous model, but also included changes designed to increase fuel efficiency of all versions, while embracing the latest safety and convenience technologies.

For the standard gasoline versions, prices for 2023 begin at $26,450 plus $1,295 freight for the SE model with a 2.5-liter four-cylinder engine, an eight-speed automatic transmission and front-wheel drive, or $27,950 with all-wheel drive.
The 2023 models carry over with no changes from 2022.
Powering the Tucson PHEV is a turbocharged 1.6-liter GDI four-cylinder engine, paired with a 66.9kW permanent-magnet electric motor and a six-speed automatic transmission with paddle shifters.
The gasoline engine and electric motor have a combined 261 horsepower and 258 foot-pounds of torque, which give this vehicle a very quick startup, making it fun to drive.
It also comes with a 13.8kWh (kilowatt-hour) lithium-ion polymer battery, along with a 7.2kWh onboard charger and charge port. It can be recharged using regular 115-volt household current, but that takes much longer than the 1.7 hours using a 240-volt power source.
The transmission is shift-by-wire, and there is an electric parking brake. The HTRAC all-wheel drive comes with Drive Mode Select, which consists of a toggle switch at the front of the center console gearshift buttons. Modes include Eco, Sport, Smart and Snow.
Our Tucson Limited PHEV came with a panoramic sunroof, 19-inch alloy wheels, premium grille finish and LED daytime running lights, automatic LED headlights and taillights, body color rear spoiler with LED brake light, roof rails, rain-sensing wipers, and rear privacy glass.
Inside, there are leather seats, ambient lighting, dual automatic climate control with rear vents, power driver’s seat with lumbar support, power passenger seat, heated and ventilated front seats, heated rear seats, and Bose premium audio system.

Tucson’s new exterior includes half-mirror design daytime running lights built into the grille, which are visible only when they are illuminated.
The vehicle’s side profile includes a long hood and level roofline, coupled with a long wheelbase and short overhangs. Similar to the daytime running lights, the full-width taillights have half-concealed triangular shapes that are clearly visible only when illuminated.
The dash features a 10.25-inch touch screen, a hoodless digital gauge cluster, and multi-air ventilation, which Hyundai says is “a temperature-adjusting system providing diffused airflow on the front passengers … [which] reduces potentially unpleasant airflow.”
Up front are comfortable bucket seats, and there is a three-passenger bench seat in the second row. The Tucson’s second-row seat has a “fold-and-dive” function to instantly expand the cargo area when no passengers need the rear seat. There is a convenient release lever for this feature in the cargo compartment.

A hands-free smart liftgate is included, along with power/folding/heated outside mirrors with turn signals; dual front and rear USB ports; leather-wrapped steering wheel and shift knob; rear view monitor with parking assistance; auto-dimming rearview mirror with Homelink; wireless device charging; audio with Android Auto and Apple CarPlay; tilt/telescopic steering wheel with audio and cruise controls; proximity key with pushbutton start; and Hyundai’s Digital Key.
As with most new vehicles, the redesigned Tucson is offered with a host of advanced, high-tech safety features previously found only on luxury vehicles.
These include Forward Collision-Avoidance Assist; blind spot collision avoidance assist; Rear Cross-Traffic Collision-Avoidance Assist; Lane Keeping and Lane Following Assist; Safe Exit Warning; Driver Attention Warning; rear occupant alert; and Smart Cruise Control with Stop and Go.
The rear-seat occupant alert system is designed to remind the driver to check the rear seat before exiting the vehicle, but it goes beyond that. If after the driver exits, the system detects movement in the rear seat, it will flash the lights and sound the horn, and send a text message to the driver.
Our tester came with the Quartz White exterior color ($400 extra), and gray interior.
The Tucson also has the Hyundai Blue Link system, with enhanced safety, service and infotainment telematics. Included in this system is the remote start feature.

Besides the premium paint, the only extra on our test vehicle was the carpeted floor mat package ($195).
Total sticker price for our 2022 Tucson Limited PHEV was $44,590, including freight and the extras.
The automotive columns of G. Chambers Williams III have appeared regularly in the Express-News since 2000. Contact him at [email protected], or on Twitter @gchambers3. His driving partner Emma Jayne Williams contributed to this report.

Parades, ceremonies, memorials in the Metro-Phoenix area in the Valley

Amid a major federal investment in electric vehicles, it’s time for states to step up, advocates say